Members of “No OSCA? No Oberlin” Advocate for Future of Co-ops 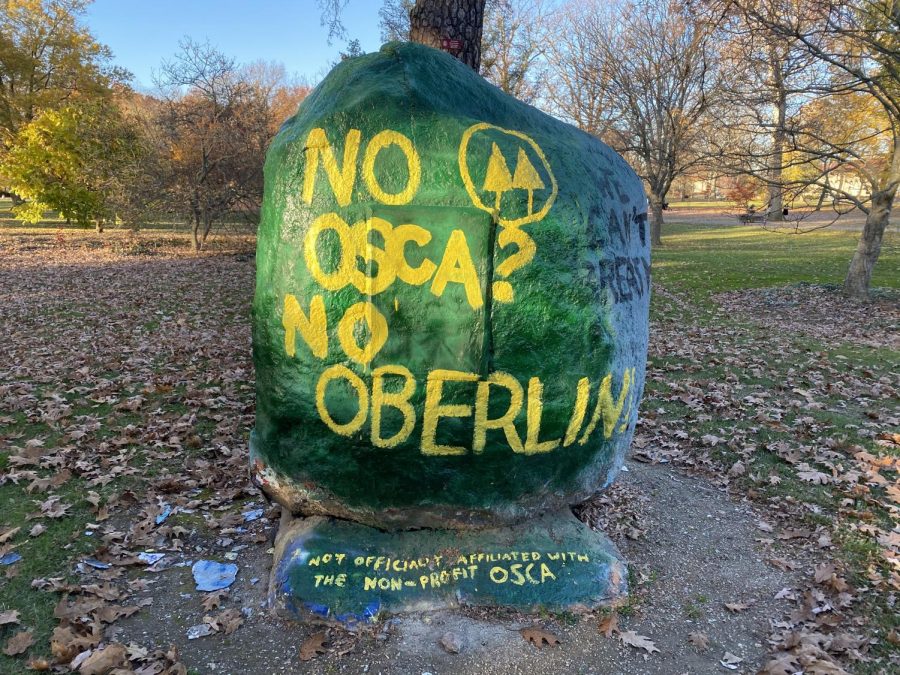 No OSCA? No Oberlin is a new student group formed in response to the decision to close co-ops due to COVID-19 safety concerns this semester.

Concerned members of the Oberlin Student Cooperative Association have organized a group called “No OSCA? No Oberlin” to advocate in support of the nonprofit. Due to safety concerns around COVID-19, OSCA has not been operating cooperative living or dining spaces during the fall semester. NONO members fear that the College could attempt to shut down OSCA operations or raise OSCA prices, hindering financial accessibility.

The group’s formation comes in the midst of ongoing negotiations between the College and the OSCA board — with which NONO is unaffiliated — regarding rent contracts and the possibility of OSCA reopening in spring 2021. While co-ops are closed currently due to COVID, NONO members feel that the relationship between OSCA and the College has been fraught since the 2019 Academic and Administrative Program Review asserted that OSCA costs the College $1.9 million each year. The subsequent One Oberlin report recommended that OSCA and the College work together to craft a sustainable financial relationship.

Participants in NONO released a petition recently, listing demands for the College which include reopening co-ops for full dining by summer 2021 and full housing by spring 2021; ending reductions to students’ financial aid due to membership in OSCA; and extending the length of OSCA leases for at least 10 years.

While OSCA has not had access to its facilities this fall, many OSCA kitchens and housing spaces are currently being operated by Campus Dining Services and Residential Education. Fairchild and Harkness kitchens now house Umami and Clarity, while Keep Cottage serves as a quarantine building for students exposed to COVID-19.

The College and the OSCA board released a joint statement in June announcing that OSCA would cease operations in fall 2020 due to liability issues and risks related to COVID-19.

President Ambar said that this decision was driven by the College’s desire to ensure the health and safety of students and to take on the liability for student welfare.

“OSCA would be complicated for OSCA student officers only in the context of the COVID challenge,” President Ambar said. “One of the things we said early on with the officers is that trying to pull off the management of OSCA in the context of COVID was not only challenging, but that it had this sort of string of liability issues that would be complicated with the students. … I don’t see anything in my mind that’s changed in terms of the challenges that we experienced in ensuring the health and safety of our campus community … from the decision we had to make in the fall.”

By contrast, Lorain County Public Health Commissioner Dave Covell told the Review that, barring safety hazards such as the use of small kitchen spaces where proper distancing would not be possible, co-op dining could function safely during the pandemic.

“In a co-op you would probably look at using safe dining, which is the guidance around restaurants and how they can come back properly, and you could still do it relatively simply,” Covell said. “It’s important to make sure it’s designed right so that people who are working there can still maintain distance and still handle all the precautions they need to have.”

Beaux Watwood, College second-year and participant in NONO, is concerned that the College could permanently reduce OSCA’s capacity in favor of more financially advantageous options for the College.

“We’re concerned about whether or not the College actually wants OSCA to be able to continue at all,” Watwood said.

However, President Carmen Twillie Ambar says shutting down OSCA is not the College’s intention.

“It’s not my desire, nor has anyone on the Board ever expressed desire for OSCA not to be here,” President Ambar told the Review. “People value OSCA, value the experience students get from OSCA. The discussion about OSCA in the context of One Oberlin has always been about the differential in cost that OSCA students pay compared to other students, and the ability of the institution to sustain that differential over time.”

In the One Oberlin report, while the Academic and Administrative Program Review steering committee discouraged ending the College’s relationship with OSCA, they also asserted that OSCA is a financial drain for the College.

“These students represent both lost revenue and additional facilities capital and operating costs to the College,” the report read. “The contractual relationship with OSCA and [Kosher Halal Co-op] is causing the College to operate facilities that it would otherwise decommission.”

However, participants in NONO dispute this claim.

“They’re not losing $1.9 million,” (Grace) Hamby, OC ’20, and member of NONO said. “The basis for that number is that if there was no OSCA and everyone paid normal room and board price, they could be making that much money — that’s not the money that they’re making. That’s not a good basis for their claim that OSCA has a negative financial impact on the budget.”

The One Oberlin report also claimed that OSCAns benefit from extra financial aid because participation in the program costs less than the College’s room and board fees.

“Because the current arrangement allows OSCA to artificially underprice its program, students who participate in OSCA gain what is effectively additional financial aid, subsidized by students who live and dine with the College,” the report states.

Members of NONO argue that this analysis is flawed.

“OSCAns put four to five hours a week of work into the co-op — that’s what is driving that reduced figure,” Hamby said. “Also, OSCAns are students of the College and we all pay tuition to the College. No one would say that chem majors are being subsidized by non-chem majors to pay for their fancy chem materials.”

Many argue that participating in OSCA also makes the College financially accessible for many students who may not qualify for financial aid, but for whom the lower cost of OSCA makes the difference between being able to afford the College’s steep price and not attending Oberlin at all.

For other Obies, OSCA also represents a unique aspect of the College’s culture and sets it apart from other similar liberal arts colleges.

“Right now, walking around campus and knowing that there’s no OSCA, I’m like, ‘This is just like Kenyon or like Smith or like any other small liberal arts college,’” Hamby said. “It’s not different anymore. There’s nothing that makes it special.”

For Watwood, the decision is simple.

“I just don’t think Oberlin understands the value that OSCA provides for it as a college,” they said. “There’s no Oberlin without OSCA — it really comes down to that. I have no reason to be here without OSCA.”

The College and OSCA board members stated that they were unable to comment on the ongoing negotiations.