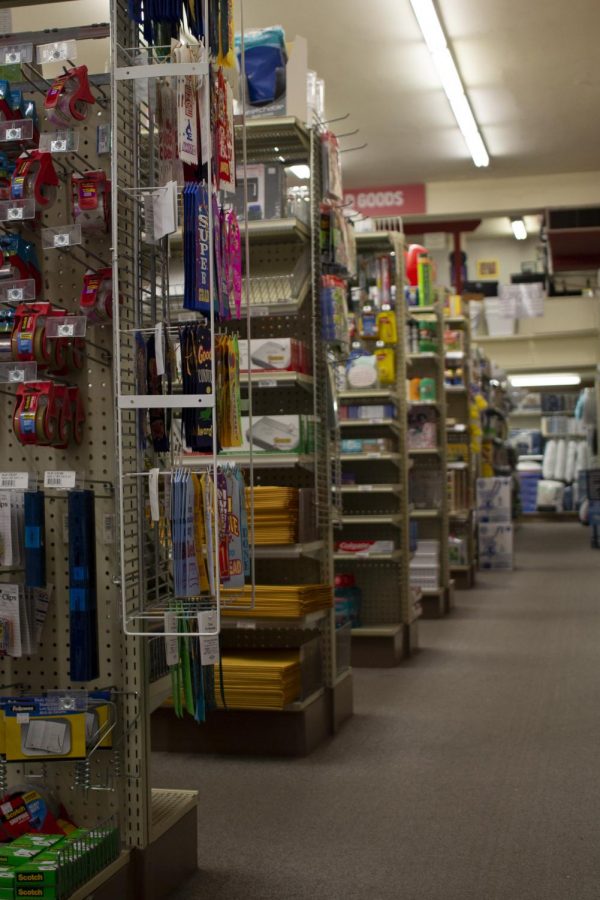 Ben Franklin sells everything from school supplies, to snacks, to potted plants and relies heavily on student patronage.

Even in a typical year, many businesses in Oberlin financially plan around College breaks and summer vacation — slower moments when students aren’t around to pick up a desk lamp at Ben Franklin or a latte with oat milk at Slow Train Cafe. This year, in which students were unexpectedly sent home in late March and will now stay home after Thanksgiving, businesses that rely on student patronage took the hit.

“It’s really not possible to operate the way that we intend to operate if the students aren’t here for any length of time when we’d normally expect you to be here,” said Jessa Klotz New, owner of Slow Train Cafe and The Local Coffee & Tea. “When you guys aren’t here, we feel it a lot.”

Klotz New has been able to reopen The Local for curbside pickup and delivery only and Slow Train for carry out, and the semester has gone well for the two cafes. Still, she says that even since students have been back, the cafes are down about 55 percent in sales, and she expects that she will end the year about 60 percent lower than she would in a typical year.

Some businesses did not survive long enough to see students come back in September. Cowhaus Creamery, Herrick Jewelry, Quick and Delicious, Oberlin Kitchen, and Black River Cafe all permanently closed their doors this summer, and The Corner Joint shuttered in early fall.

As some stores close, new businesses are also springing up around town — a pop-up fair trade store called the Hope Collection by INTO and two restaurants, Steel Magnolia and The Arb at Tappan Square, have already opened or will open this semester. Though Agave Burrito Bar & Tequilería had been closed since the beginning of the pandemic, last week it announced a grand re-opening coming next month under new owners and a new name: Agave Burritory.

Ginko Gallery has seen fewer customers recently, but has been able to stay afloat off of student business.

“When the governor shut down all non essential businesses in March, I definitely considered closing, I had zero income for two months but still owed rent, utilities, credit card bills, etc.” Ginko owner Liz Burgess wrote in an email to the Review. “The students have been essential in staying open this fall. It seems some have made a deliberate effort to shop in town when they can and I am thankful for that. … I have noticed them buying more art supplies, especially small sets of paints, paper, drawing, origami, etc. My guess is that they have more alone time to take on creative projects.”

Some stores are not as reliant on student business. While the pandemic has been tough on Watson Hardware in general, the difficulty had little to do with students’ absence, according to owner Jerry Anderson.

“Business got really slow right when [the pandemic] started,” Anderson said. “As time went by, it started to pick up and it got closer to a normal business again, even before the students got back.”

Watson Hardware has run into trouble with customers who elect not to wear masks. However, with cases spiking in the past couple of weeks, Anderson has seen this behavior decline.

“Before we had people come in and say, ‘We are not sheep,’ and just refuse,” Anderson said. “But lately I think people are really getting the message, and we’re not getting people coming in without masks anymore.”

“I think all of us downtown would say — I suppose I shouldn’t speak for everyone — but we’ve just been really happy with how committed the students are to the various measures and the masks and distancing,” she said. “In so many ways, the student body has been much more compliant than people had feared, and also more than a lot of other populations.”

Unlike many other stores around Oberlin, The Oberlin Bike Shop has thrived financially during the pandemic.

“This is the busiest year that the site has ever had,” said Randy Houston, owner of Oberlin Bike Shop. “We just got lucky, and we happen to be one of those businesses — all anybody’s allowed to do is ride a bike or do things outside that are socially distanced.”

Houston estimates that students are about 25 percent of his regular business, but because of the sharp incline in demand for bikes in Oberlin and the surrounding towns, his business didn’t miss the students while they were gone.

Oberlin Bike Shop was not untouched by COVID though. One of Houston’s employees caught the virus early on in the pandemic and was out of work for about eight weeks.

“For a small bike shop like us, having just one employee out for that amount of time is hurtful to the business — it really slows us down,” Houston said. “We’re like a family. We care about our employees and everything. Everybody knows each other really well.”

Every business has had to increase safety precautions. Stores have had to create new sanitation routines, and Klotz New has suspended sit-in service at Slow Train.

“It’s kind of heartbreaking for me to go in there because all the furniture is pushed up against the walls,” Klotz New said. “It’s hard because I don’t have anywhere to put it. I don’t know what to do with it. I had thought that by now, we would be further along in returning to normal. I’m sure we all did. But we’re pretty far away from that still. We’re just trying to survive still.”

Last week, Governor Mike DeWine warned in a press conference that colleges and universities might not be permitted to bring students back to campus in January if COVID-19 cases continue to spike. The uncertainty of this announcement has added additional stress for the businesses that rely on students.

“The possibility of students not returning in January is scary,” Wendy Boes, co-owner of Blue Rooster Bakehouse, wrote in an email to the Review.“It’s tough because we completely understand the reasoning behind these difficult decisions. But at some point, as business owners, you do ask yourselves how much you can withstand.”

Klotz New says that some days she’s still nervous about her businesses, especially with students leaving early this semester. But like many others around town, she’s trying to remain optimistic.

“There’s been moments over the last five or six years where my family and I have questioned whether we want to stay in Oberlin and what our long-term plan is,” Klotz New said. “Although there’s been many awful things that have happened this year, there is sort of this one bright spot that has reminded me how wonderful this town is. I can’t imagine being in any other community and going through what we’ve gone through. The people, students, the town folks, I mean, just everyone in this town takes care of each other. And I don’t think that a lot of places can say that the way we can.”

Editor’s Note: The Review has continuously covered how COVID-19 is impacting Oberlin’s downtown businesses since the beginning of Ohio’s shutdown. Click here to read more about how local businesses have responded to the pandemic.