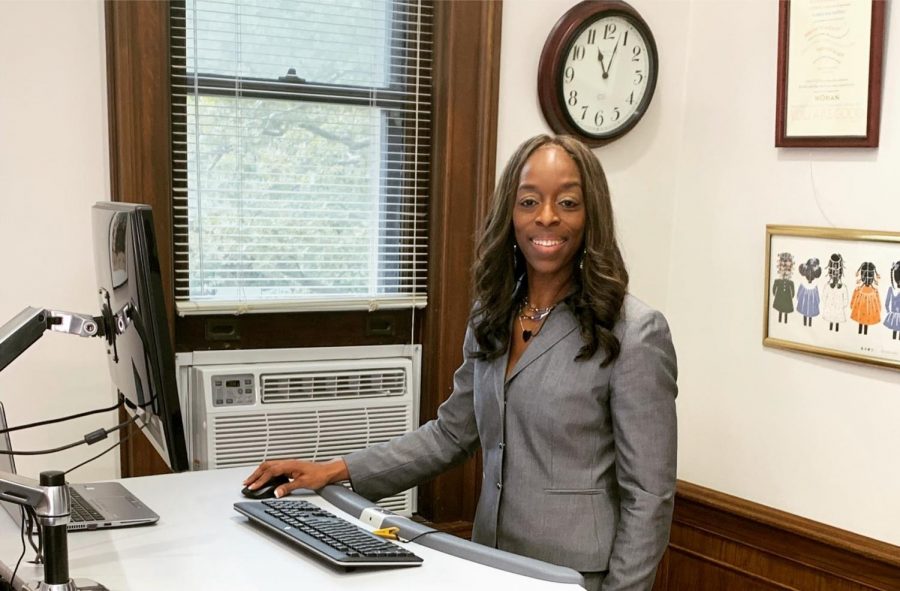 In the final full week on campus, President Carmen Twillie Ambar reflected on a challenging year for the country and for colleges across the nation. The College shifted to a three-semester model, de-densifying the student body’s presence on campus; established a Presidential Initiative for Racial Justice and Equity; and became one of the founding members of the Liberal Arts College Racial Equity Leadership Alliance. Between all of this, President Ambar also co-edited the book Junctures in Women’s Leadership: Higher Education, published this past September, and hosted a Presidential Tire Flip Challenge. President Ambar has headed Oberlin College since 2017. She is a mother to triplets.

You’ve said that planning for this year was like rebuilding the entire College in only a few months. Now that it’s almost over, how do you feel the first COVID semester has gone?

I couldn’t be happier that we are in the position that we’re in. It gives me confidence that we can do it in the spring, but we have to be just as diligent, just as committed. We can’t get tired of this and frustrated and get lax. It doesn’t allow for that, and that’s the tough part about it.

You’ve also spoken before about positive things that have come out of the College’s COVID-safety measures that you hope are here to stay. Can you tell us about some of those?

Oh my God, there’s so many of them. I think all of the things that are coming out of the Conservatory around music-making in a pandemic — some of those things we will have to keep. You can walk around campus and hear music in ways that you didn’t hear it before. … I don’t know what I’m going to do when the choir isn’t outside my office, frankly. Because I can hear them when they’re under Mudd Center. Also Junior Practicum — the 50 workshops with students being able to talk about the most complex problems with some of the world’s leaders, essentially, in their industries.

I think that for the best institutions who come out of this experience thriving, it will be because they didn’t hunker down and just try to preserve what they did — they tried to learn from it, and they took those lessons into the next few years. There’ll be some institutions that, as crazy as it sounds, will come out stronger out of COVID. And I think that we’re on the cusp of that — that we will come out stronger because of it.

This year you’ve also established the Presidential Initiative and, more recently, Oberlin College has become one of the founding members of the Liberal Arts College Racial Equity Leadership Alliance.

It’s important to me that Oberlin be one of the founding members [of LACRELA] because that’s who we are. If you go and look at college presidents, maybe 20 or 25 years ago, it was easier for college presidents to have a national voice on issues. When college presidents spoke on issues of race, or income inequality, or the issue of climate change, people paid more attention. Now it’s hard to break through, but maybe collectively we can. That’s one of the reasons why [LACRELA] is important. When these issues arise, individual voices in this noisy public square, it’s hard for anybody to care. But a collective voice of a hundred college presidents saying, “This is the direction that we should go in in terms of racial equity and diversity and inclusion” — I think has an opportunity.

I also think it gives us maybe more leverage with legislators, with our senators, with our Congress folks, with nonprofit organizations that may be thinking about funding. That’s how we’re going to move the needle. The truth of the matter is that any small college, and I would put Oberlin in this framework, no matter what we do around these issues for our individual students, it only has that much space, right? What about something that is national in scope? That has some power. So, lots of work to do.

You also have a similar vision for what student activism can be — can you talk a little bit about that?

One of the things I hope students will think about a lot in terms of their activism is that I want our students to turn their gaze outward. Not that there’s not critiques to make of Oberlin, and not that there are not changes to make here at Oberlin, but that I think that the real work is not at Oberlin — it really is in our community and on the national framework.

When students talk to me about being attracted to the ‘one person can change the world’ idea, the issues that they talk to me about are not Tappan Square issues. It’s immigration, it’s climate change, it’s police reform. I think that sometimes we can be too myopic here. … That’s not to say that I’m objecting to being critiqued as president or the administration. I’m just saying, if you’re here to make change, let’s make change with impact.

Somehow you found the time to co-edit a book, Junctures in Women’s Leadership: Higher Education. Can you tell us about the chapter you wrote with Tyler Sloan, OC ’17 on Ruth Simmons?

Ruth Simmons burst on the national scene as the first Black woman president of an Ivy League institution. These people who take their personal mantra and find a way for that to have regional, national, international relevance are really interesting people to me. What I appreciate about them, and Ruth Simmons is in this category, is that they bring their true selves to the table. They bring their gender, they bring their ethnicity, they don’t put it aside in order to be in those roles. In fact, they embrace it fully and say, “Yes, that is so important that I’m putting this before whoever is observing me as an important part of who I am.”

We were in the midst of the Academic and Administrative Program Review when I went to talk to her, and one of the best things she said to me was, “You have to have patience as a leader.” She said, “Things begin, but they oftentimes have no connection to how they end. When things begin in complicated and difficult and rancorous ways, that doesn’t necessarily mean that that’s how they will end. But you have to have patience as a leader.” I just needed to hear that.

You balance so many things, which I think a lot of Oberlin students are often trying to do as well. How do you manage it?

The other thing is, I have a lot of help. I remind myself all the time, there are so many women who don’t have help, who don’t have income, who don’t have the ability to go and take their kids to the doctor and not lose salary because they’re working an hourly job. One of the ways to feel better about things is to remind yourself how fortunate you are, and to be grateful about it.

I also have my morning practice. I got to get my exercise, absolutely critical. I’ve got to do my scripture, my reading that gets me grounded in where I need to go. I’ve got to get a breakfast that sustains me. And I have a few moments of, not meditation, but a moment of pause where I go, “Okay, let’s collect.” Those morning practices are critical.

How early do you wake up to do all that?

Really my alarm goes off at four in the morning. I’ve been doing about 15 minutes earlier recently because I hurt my hamstring so I need to get a little more warm-up in before I start my workout.

What is your Blue Rooster Bakehouse order?

I go in there fairly often now with the triplets, but I try not to partake because Blue Rooster, for me, is a dangerous place. … I definitely love the brownies that have kind of the pretzel with it, so you have the salt and sweet.

The first thing I tried there, which I hadn’t really had before, were oatmeal cookies with cranberries, and I got hooked on those as the thing that makes my life happy. The great thing about triplets is that you have to buy three of everything. Gabby wants baguettes. Absolutely. She loves bread. Daniel wants chocolate chip cookies. They must happen. Luke wants a brownie, and then I always get each one of them something different, whatever’s new in there.

Our managing editor went to Blue Rooster Bakehouse recently, and the employees were like, “Oh, President Ambar paid for your cookie!” It made her so happy.

So, you know what happened? I was in Blue Rooster one day, and some students were behind me. It was pretty early on in my time at Oberlin. When I went up to the register, I just said to the cashier, “Yeah, I got them.” And, oh my God, these students were so happy about that. I mean, just like over the moon, happy about that. … And so I kind of made it a habit when I would be in Blue Rooster. If some students were behind me, I’d say, “Well, I got them.” And it bothered me so much that in COVID I wasn’t going to be able to do that.

What we said to Blue Rooster, and to Slow Train Cafe, was we gave them a set of resources and said, “You do it for us.” The Blue Rooster people have said to me how much fun they’ve had in doing that. It reminded me again of what we all know, which is that sometimes it’s just the little things.