Sarah Fuller Kicks-Off a Revolution for Women in Sports 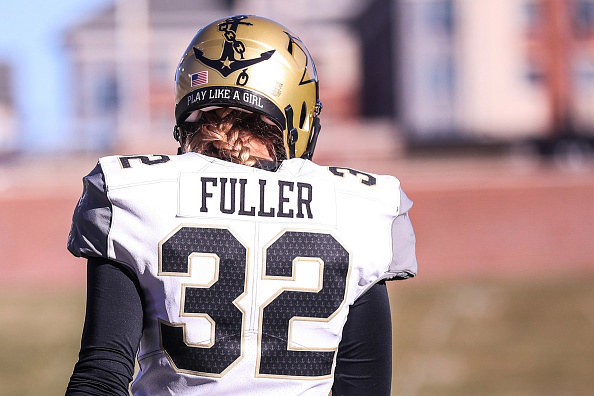 Sarah Fuller #32 of the Vanderbilt Commodores walks on the field prior to a game against the Mizzou Tigers.

This past Saturday, Sarah Fuller became the first woman to play a regular-season game in one of college football’s Power 5 conferences by starting kickoff during the second half for Vanderbilt University. Fuller, a fourth-year and starting goalkeeper for Vanderbilt’s women’s soccer team, was asked to play for the Commodores this week after the team’s kicking squad was forced to stop practicing due to a potential COVID-19 exposure.

Although Vanderbilt lost to the University of Missouri with a score of 41–0, Fuller’s willingness to defy norms will go down in history. The soccer player boasts many accolades besides her record-making kickoff this weekend. She played a key role in clinching Vanderbilt’s women’s soccer team’s first SEC women’s soccer title since 1994, with a 3–1 victory over the University of Arkansas. This fall, she also started nine of 12 soccer games — including all four games during Vanderbilt’s 2020 Southeastern Conference Tournament championship run.

On the field last Saturday, Fuller wore number 32 — the same as her soccer jersey — and a helmet with the phrase “Play Like a Girl.” In the stands, her family could be seen with that same phrase written across their masks. “Play Like a Girl” refers to a charitable organization inspiring girls through sport and active play, and has grown a nationwide following.

Oberlin College third-year and member of the women’s soccer team Sophie Payne is deeply inspired by Fuller, and is proud to see that another women’s soccer player is getting involved in activities that will revolutionize social justice for women in sports.

“It’s an inspiration to see any female playing at a high level such as that and succeed,” said Payne. “As a female soccer player, I’ve dealt with the issue that soccer is usually deemed as a men’s sport, but the women’s U.S. National team has proven [otherwise]  on countless occasions.”

Payne continued that Fuller’s actions Saturday have the power to inspire all women athletes — regardless of sport and nationality.

“The fact that Sarah Fuller stepped up and played a sport that has always been strictly a male sport is so inspirational to all women athletes around the world,” Payne said. “She proved that you can do anything you set your mind to.”

There are still many who don’t approve of the idea of having women participate in “male sports,” and Fuller faced criticism from the public — especially on social media. On Vanderbilt University’s Facebook page, some argued that this was “a publicity stunt” and others said they were “betting money to see her get tackled, praying to see her fail.” One comment on ESPN’s Instagram post read: “Women shouldn’t be on the field.” The comment received over 200 likes.

Second-year volleyball player Lindsey Felton said that while she has faced gender discrimination in sports, it only fuels her fire on the volleyball court and in life.

“The hate Fuller has had to face is disgusting, and it happens a lot with women’s sports or even when women talk about sports in general,” said Felton. “People make it seem like women aren’t good enough and that they have to prove [themselves] which shouldn’t be the case. I’ve found it makes me work so much harder to prove them wrong.”

As a woman in a male-dominated sport, Assistant Football Coach of Cornerbacks and Director of Football Operations Alex Hanna has been able to learn how to feel confident in her role as a football coach.

“If you’re knowledgeable on your profession, your career, then nobody will question it,” said Hanna. “As a woman, I’ve found that if you speak it with confidence, if you’re confident in what you’re coaching, in what you’re teaching, it will override any questioning or anything else that comes up.”

Steve Opgenorth, head coach of the Oberlin Men’s Football team, brings up the fact that many people who don’t truly understand the game of football were very quick to judge Fuller’s efforts during the game — but what many don’t know is that there are specific strategies teams design to determine where they want their kick to land. Fuller opened the second half of the game with a low kick that bounced to the 35-yard line, a play that Vanderbilt football coach Derek Mason says was by design.

With all the negative judgment, Opgenorth highlighted that the decision to have Fuller kick for their team was simply because she was the best athlete who would step up to the plate.

“Sarah Fuller has helped the athletics community realize that if individuals, no matter their sex or gender, have earned the right to play, they can change the stereotype,” said Opgenorth. “Individuals that allow programs to grow and develop — who have earned it — will continue to change the game and certainly become some foundational pieces in athletics and football.”

College third-year women’s volleyball player Kira Widran has always had a love for sports like football, but never imagined a woman would be able to have a significant role in playing the sport.

“Watching her suit up and actually play was so exciting — even though I don’t really care about Vanderbilt football — because it gave me hope that in the future sports could be more integrated in terms of gender,” she said.

Widran is also inspired by the way Fuller handled herself in the media and how maturely she dealt with the hate she received.

“By continuing to do what she does, shutting down and proving wrong to all the people who said she couldn’t do it or didn’t belong in a man’s sport, [she] sets a great example and opens a door for generations of female athletes to come,” said Widran.

Fuller is not the first woman to play college football in the top tier of Division I. Names like Katie Hnida, who was the first woman to score in a Football Bowl Subdivision game as a place-kicker for New Mexico in August 2003, and April Goss, who scored while playing for Kent State in 2015, have helped to carve a path for Fuller.

Hanna believes that the next step will be to normalize having women compete in men’s sports. The more that women can move into spaces traditionally occupied by men, the fewer people will believe Fuller’s actions were part of a publicity stunt.