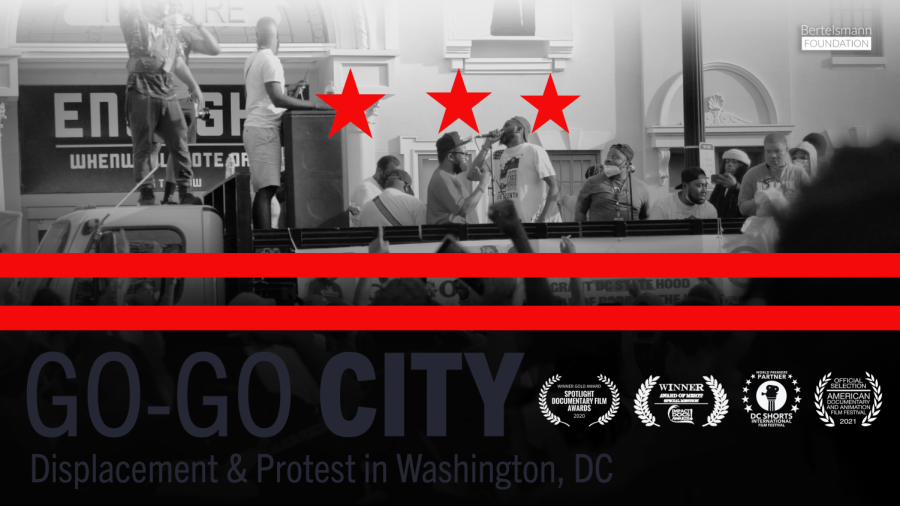 The Oberlin Club of Washington is screening Go-Go City: Displacement & Protest in Washington D.C. on Feb. 11.

Samuel George, OC ’07, is a self-taught documentary filmmaker who, since picking up the craft, has made 15 films and won several awards. His latest project — recent winner of the Gold Award at the Spotlight Documentary Film Festival — is titled Go-Go City: Displacement & Protest in Washington D.C. It follows the Black Lives Matter movement in the capital amid the gentrification of beloved Black neighborhoods, businesses, and Go-Go music. The film will be screened online on February 11, followed by a panel with the documentary’s subjects mediated by Nana Afua Mumford, OC ’08, of the Washington Post. Click here to register for the screening through the Oberlin Club of Washington.

What was your trajectory like after graduating from Oberlin with a history degree? How did you end up making documentaries?

It was just so nonlinear. I had that international bug — I wanted to get out and experience things. I ended up teaching English in Spain and did some traveling in Central and South America, and just really started to feel like that was a passion for me. So after wandering for a while, I ended up returning to do a master’s degree in Latin American politics and economics, which is how I ended up in Washington at Johns Hopkins University. I ended up with this job at a think tank writing policy. The job was to talk about Latin America in the United States, so I found myself tied to my desk writing from there and that’s part of where I got this idea: “Well, if I were to start recording some things, like interviews, well golly, I guess I’d have to be there, wouldn’t I?”

I always realized there was something beautiful about giving people the chance to tell their own stories. What I really started to do was these interview videos, that’s how I learned this, and it’s a wonderful way to learn. And then I would cut up an interview, so I started to learn how to edit a little bit. I just stumbled into the discovery process, thinking, “Here I am in Brazil or Argentina, wouldn’t it be good to have a cool picture to put before the interview?” So I would take some shots on the street, and then there were these eye-opening moments for me when I would say to somebody at a newspaper stand, “Hey I just interviewed politician X and he said this, what do you think about that?” and he would just say his opinion! And you could do these magical things where you could combine what the politician was saying with what the guy on the street was saying. And I had no idea what I was doing at the time, but what I was doing was learning about documentary filmmaking on the job, which was in retrospect, a complete and utter luxury.

Have your documentary subjects ever talked to you about how you’re a white person making films about communities as an outsider?

That is such an important question, and I understand why this question comes up. It’s really important in this day and age, who is telling what story. Because a lot of people from certain communities don’t have access to the storytelling process, and that’s problematic. Also, I think that there are a lot of times when people come from outside and tell a story wrong, and that’s infuriating for people that are having their story told.

I take that very seriously, that if I’m going to do this, it’s important that it be correct, that it be reflective, and that it be giving the people a chance to tell the story in their own words. And that’s why some of the most important feedback comes from the people that are in the documentaries, who see it before it gets released. I’m happy to say that at this point, across what I’ve done, it’s always been positive. I’ve never had an issue where someone said, “that’s not what it was.” And that means the world to me.

Some people will not want to be in the documentary, and that’s totally okay. Other people, when they see you and realize you’re an outsider, there’s often an initial concern. I don’t want to say suspicion because suspicion makes it sound like it’s bad. I don’t think it’s bad, I understand the concern. But I think that if you can get on the same page, and if they understand that you’re doing it for the right reasons and that they can trust you, people really enjoy telling their story.

Did this documentary also have another layer of reflection for you, working with a community you’re a part of, while also being a part of the wave of gentrification?

I think a part of it comes from my anger with what’s happened with people like me. I’ve been really offended by what Washington has become, and I’ve felt that way since I got here. I wasn’t very happy because it felt like it was all built yesterday. I said, “Where’s the depth here? Where’s the culture here? There’s a new tequila shop with eight different colors of tequila and furniture from IKEA, but where’s the culture?” It took me a long time to learn that that’s not because the culture didn’t exist, it’s because the culture was being pushed away. That made me mad. Once you can start getting a peep into that culture, you understand that there was a real Washington here. It’s been knocked over.

One thing that I have overwhelmingly found is that in the long-term community of Washington, they’re not even angry at outsiders! They’ve been nothing but nice to me and welcoming, and I found this especially when I started going to the Go-Go shows. Their anger and frustration come from the feeling of being ignored and replaced, and people not even taking their culture into consideration. I can’t tell you [in] how many of the interviews on gentrification, people said, “You know what really bugs me? Why don’t people say hi? Why don’t people say hi to us? When we grew up here, everybody would say hi, walking down the street. And now these new people walk in, and they don’t say hi.” And it’s absolutely true.

There are basically two communities in Washington. I don’t think it ended up in the film, but someone I interviewed for it described it as “ships passing in the night.”

What was the most poignant part of the film for you to make?

The most poignant moment for me is when it all ties together at the end. I started filming the protests, even though there wasn’t necessarily a direct link to what I was doing, which was gentrification expressed economically and culturally, using Go-Go as example A.

That was not immediately what the protests were about. They were about injustices and abuse in policing and criminal justice. I almost thought that what I was gonna make was gonna be something completely separate. I would just make a short 10-minute video of scenes from the protest, lightly edited, artistically to make you feel like you were on the ground.

But then the amazing thing happened. Go-Go bands became a central part of the protest movement. The Go-Go bands were rallying the people, they were playing on these trucks and leading whole groups of people down to the White House. Bringing people back to the streets that had been pushed off of the streets. So once you get to that point, what I was seeing was people rallying around that culture to retake the streets they had been pushed off of.

The most poignant moment of the film for me was when I was on the truck going under the bridge, and it was just the triumphant return of that Washington community. Suddenly all those pieces were coming together from the beginning, and that’s when I knew that we had the chance to pull all these very different topics together. So that shot, going under the bridge with the supporters, is the moment that always gives me the chills. That’s also me doing what I love to do best, getting really close to the story. And we were right there.