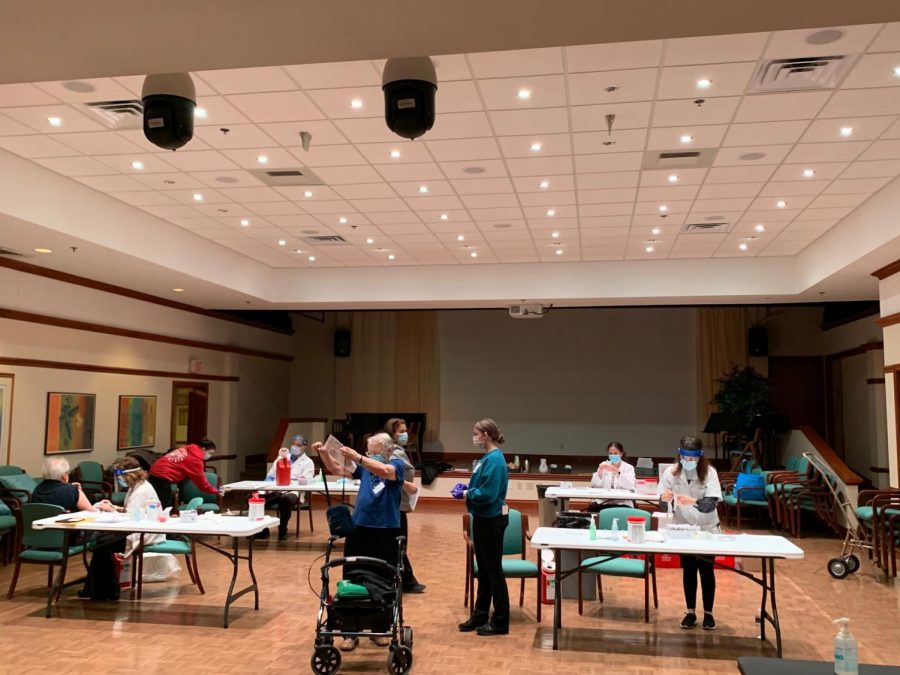 Local retirement home Kendal at Oberlin completed its last of three COVID-19 vaccination clinics this Thursday. Nearly a year into the pandemic, the living facility has experienced just one positive COVID-19 case and has now vaccinated about 98 percent of residents.

Kendal began carrying out vaccination clinics in early January after agreeing to work with CVS and Walgreens, two of the pharmacies with which the state of Ohio has partnered. Although the Trump administration was criticized for relying on private companies as part of the Operation Warp Speed vaccine distribution plan, Kendal’s Chief Executive Officer Barbara Thomas explained that the retirement community has not faced the kinds of delays that other long-term care facilities have dealt with.

“Who better knows … how to roll this out than a national provider?” Thomas said. “Because with this temperature [that] you have to keep both of these vaccines [at], we didn’t really want that concern and responsibility. We give flu vaccines every year. We can give other vaccines, but this is new. So we were happy to accept their program. As soon as we got signed up, within a week we were told it would be given to us at the end of December.”

Having been vaccinated, residents are looking forward to a gradual relaxing of current restrictions. Kendal’s New Normal Planning Committee, a group of residents and administrators, has worked throughout the pandemic to keep residents safe.

“[The group thinks] through recommendations about, ‘What can we do? What shouldn’t we do? How can we go about it? How can we maximize our independence and maximize our safety?’” said former President of the Residents’ Association and New Normal Committee member Gary Olin.

The group has started evaluating the feasibility of reopening dining and exercise facilities. The campus will also begin to allow residents to visit other residents’ cottages while remaining masked, starting on Feb. 25. However, twelve-year Kendal resident and member of the committee Don Parker, warns that he and his fellow committee members have always erred on the side of caution to protect vulnerable residents.

“There are a significant number [of residents] that are on the side of ‘Let’s move ahead. This is a bit too long and too hard,’” Parker said. “And with the vaccination, that kind of tempo has picked up a little bit. … I think everyone is really open to logic, but as COVID fatigue becomes more evident, people just typically are less inclined to listen to logic and more inclined to listen to the nuances of personal preference and the need for outside activity and so on. So we have to keep that balance in mind.”

Overall, though, residents feel that the whole community has come together over the last year to keep each other safe.

“What I do is not just about me,” Olin said. “It’s what I do for the whole community, because we’re close here. There are other people who are very vulnerable. So I have to think about them.”

Despite hope on the horizon, coping with the last year has been a challenge for Kendal residents and staff. Kendal implemented several safety restrictions, including limiting people’s contacts and requiring masks in public spaces.

“They closed our dining rooms,” Kendal resident Alan Lockwood said. “They began delivering food to cottages. … Every time we left campus, we had to have a pass to come and go, and they still want us to keep logs of where we’ve been and who had interacted with us.”

However, residents and staff alike looked for ways to function under the new rules by creating Zoom events, allowing residents to pod with up to five other people, and offering visits with family members outside during the warmer months.

“When you have a quarantine campus and people are not able to have their meals together, to gather in-person, to do the activities they love, you have to do something to offset that,” Thomas said. “We brought people together in different ways.’”

Parker said that he and his wife have looked for ways to stay busy and connected, such as teaching classes in the Kendal art studio they helped to open in 2015. They have also worked to stay in touch with their family and grandchildren.

“The Zoom connection has really been a lifesaver in that we can … keep up with [my family’s] lives, even though we can’t see them in person,” Parker said. “They came here last summer, several times in our backyard — out in the open, masked and all that — which was okay, but it’s not the same.”

Residents are looking forward to the end of the month, when restrictions will start to loosen up, and they can begin to return to more normal activities.

“Having a return of the more normal social experience and, you know, one of the really great things about living at Kendal is all of this stuff — the concerts at the Conservatory and the lectures [at the College] and things like that,” Lockwood said. “The concerts are still a big hole in our enjoyment.”

However, residents are pleased that Kendal was able to avoid severe COVID-19 cases over the last year. Thomas also attributes the success to strong partnerships in the community. Kendal has worked with IGA to find new contact-free ways for residents to get groceries. Kendal also partnered with the College to educate residents about COVID-19. Robert S. Danforth Professor of Biology Yolanda Cruz taught a Zoom class to the Kendal community at the start of the pandemic that helped residents understand the severity of the virus.

“I’ve been in the business for over 40 years, and if I end my career and somebody says, ‘What are you most proud of?’ I would have to say getting through the pandemic without one resident or staff member harmed by COVID,” Thomas said. “Do I take responsibility for it? No. But I am so proud of the commitment and the hard work and the luck and God’s grace that we got through it.”