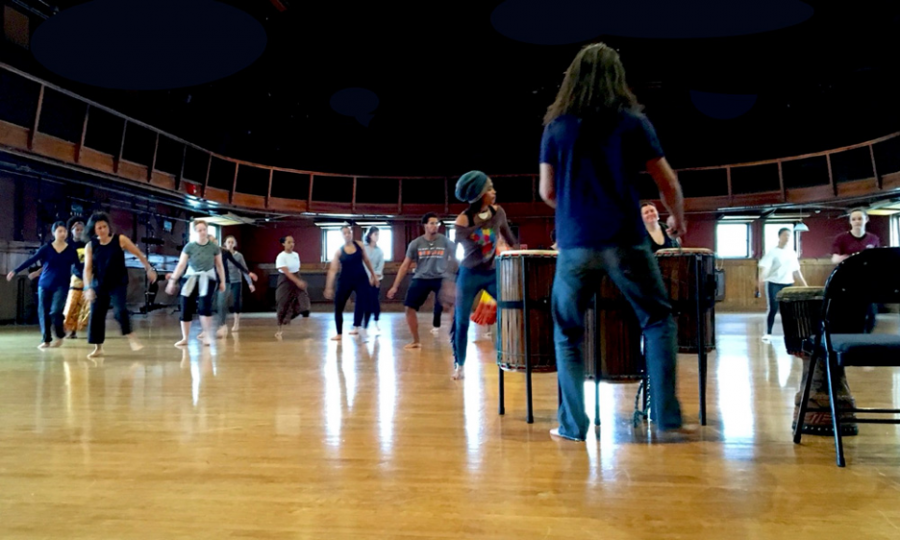 Students and professors dance in Warner Main at the Dance Ohio 5 Conference in 2019. This year, the consortium has expanded the day-long conference into a virtual symposium running over the course of the semester.

Oberlin’s Dance department recently announced the schedule for Moving Bodies and Social Justice, a new phase in the collaboration between five Ohio liberal arts schools. Professors from these schools reimagined their yearly conference, expanding what is usually a single day of events to a months-long series. The new symposium will take place over the spring semester, featuring talks, workshops, and pedagogical analysis from dancers whose work is concerned with social justice.

The Ohio 5 Dance Conference, now in its eighth year, connects Kenyon College, Ohio Wesleyan University, Denison University, The College of Wooster, and, of course, Oberlin College. In past years, hosting has rotated between the five schools, and the conference has consisted of a day or weekend’s worth of workshops, classes, and showcases.

“What’s great about this digital setup is that we get to gather not just at a single conference but multiple times, to engage various topics surrounding Dance and Social Justice, and with an invitation to the general public,” Assistant Professor of Dance Al Evangelista wrote in an email to the Review.

With the inception of the new Ohio 5 Collaborative Grants Program, dance professors across the schools were able to apply for and receive funding for this longer-term interdisciplinary and community-building project.

“Over the course of three high-impact workshops and colloquia, we will create a forum for radically re-considering our curricula and pedagogical approaches in order to engage all bodies who want to move in our dancing communities,” the professors wrote in a press release.

The workshops are centered around three tenets — Kinethics, Body Positivity: Radical Self-Love and Social Transformation, and Queer Kinethics. Ann Cooper Albright, professor and chair of Dance at Oberlin, originally conceived of the symposium. She was inspired by the term “kinethics,” which was coined by University of Washington Bothell Professor Naomi Macalalad Bragin and is a portmanteau of kinetic, aesthetic, kinship, and ethic. Bragin will begin the symposium on Thursday with her talk “Black Power of Hip Hop Dance: On Kinethic Politics.”

Rashana Perks Smith, an instructor of theatre and dance at Ohio Wesleyan University, curated the program’s second component — a conversation on self-love.

“The roundtable discussion, ‘Body Positivity: Radical Self-Love and Social Transformation,’ brings together artists Sydnie L. Mosley and Sharon Udoh to discuss ways in which radical self-love can be more than a trend, but rather a mechanism of change,” Smith wrote in an email to the Review.

Elliot Mercer, a visiting assistant professor of dance at Kenyon College, organized the section of the program focused on dance and queerness. Mercer teaches classes in ballet technique as well as history and theory of contemporary dance.

“Dance as an academic discipline has a long history of trying to legitimize itself in academia, because it’s been historically thought of as not having scholarly rigor or not having a history — especially because so much of dance is connected to women and gay men,” Mercer said. “There are many things that have historically aligned to not be as highly regarded as other academic disciplines. … We want to reaffirm that dance really intersects across programs and across departments in ways that are kind of pushing toward a more collaborative and interdisciplinary model in the liberal arts.”

Focusing on social justice has been a key part of Evangelista’s work at the College since he began teaching here this fall. He helped lead the Dance Dialogues series last semester, which allowed him to appreciate the breadth of experiences and insights that community members brought to these discussions.

“I think about ways in which we are told to move through the world and why some are told to move in specific ways and others are not,” Evangelista wrote in a message to the Review. “This sounds general but a lot of people think about this in different ways — architects and walking pathways, scientists and physical distancing, dancers and sharing weight. If we look at dance studies as a way to look at embodiment and the way we move through the world, then we can also consider how there are many ways to embody, many ways to move, in many different physical and spoken languages.”

While the symposium is focused on public talks and classes given by guest professionals, each event will also include discussions of critical and liberatory pedagogy for faculty afterward.

“After each workshop that’s student engaged, the faculty will convene with that speaker or that artist to talk through how that person is thinking about teaching and pedagogy and curriculum, and what they’re seeing in their work,” Mercer said.

Smith is also eager to see how the program’s effects reverberate beyond the individual talks.

“At OWU, interaction with the whole series is dispersed across the dance classes,” she wrote. “There is an enthusiastic openness for curricular changes based on the topics and strategies addressed in this series.”

The conference’s new format expands the connection between these Ohio colleges, ultimately creating a greater, more lasting impact than a single day of collaboration could.

“Often we think of institutions as kind of being solo, and the collective resources that we have when we come together as five programs really shows a richness that we have in Ohio, and it allows us to build off of one another,” Mercer said. “I think this is something special and important that the programs have been able to cultivate, and a great model to show what one can do in higher education with dance.”