One Connoisseur’s Take on A-House’s Mac and Cheese

I grew up eating mac and cheese; it was served in giant casseroles at Thanksgiving, Sunday dinners with my grandparents, and family barbeques. In my family, we had a rule that you could have either mac and cheese or mashed potatoes on the table during a meal, but never both. Needless to say, we rarely had mashed potatoes. Growing up, I requested mac and cheese whenever I had the chance — and as soon as I was old enough, I began my own obsessive search for the perfect recipe.

As part of Oberlin’s “To Be Young, Gifted, and Black” Black History Month celebration, Lord-Saunders Dining Hall in the Afrikan Heritage House began its Melanin Monday series. Every Monday, A-House serves dishes that are especially important to the Black community. While other meal themes have included Foods of Africa and a Taste of the Caribbean, one, in particular, was calling my name — Macaroni & Cheese: An African American Art Form.

Mac and cheese is an art form — and a science. On my recipe hunt, I made batch after batch, taking chaotic notes and changing one ingredient at a time like variables in an experiment. Once I moved to the South, I got to sample even more iterations of the mac and cheese tradition, honing my recipe further. My dedication was rewarded by other mac and cheese questants, like when I went into a restaurant with my notebook and the owner was happy to share some of his expertise, including his secret ingredient: nutmeg.

My mac and cheese typically includes sharp cheddar, Monterey Jack, and ricotta. Sometimes I add cream cheese, and ideally, I’ll use half-and-half or heavy cream instead of milk. I season with salt, pepper, and nutmeg, with maybe a little bit of garlic powder — depending on what I have or my mood. Before putting it in the oven, I add eggs, which help the dish rise and solidify into a casserole. A good batch has chewy bits of cooked cheese as well plentiful soft cheesy stretches. The noodles are fully incorporated, but not soggy. The casserole’s texture should be firm, and the whole thing is served cut into squares.

Given my great appreciation and expertise regarding mac and cheese, naturally, I took a scientific approach to analyzing the mac and cheese that A-House served on Monday. There were three different styles, which I have divided into A) Southern-style baked mac and cheese, B) skillet mac and cheese, and C) cauliflower “mac” and cheese. 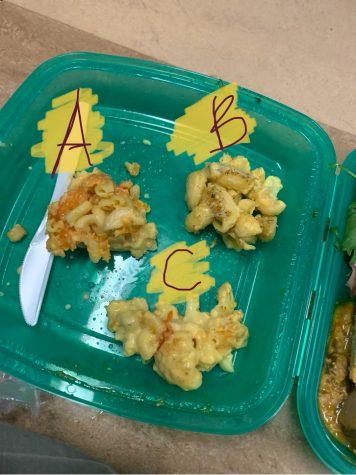 I have included my field notes on each varietal below:

A) Southern-Style Baked Mac and Cheese

The Southern-style baked mac and cheese was closest to the kind that I like. The noodles were fully cooked, but not mushy, and conformed well into scoops. There were distinctive bites of pure, chewy, cooked cheese, and — if I am not mistaken — a hint of nutmeg.

B) Skillet Mac and Cheese

This mac and cheese had larger, more al dente noodles and a thinner cheese sauce. The most distinctive difference to me was that this batch had seasoned breadcrumbs, which didn’t take away from the taste but is unusual in my tradition. Overall, it was drier than I like my mac and cheese to be, and the breadcrumbs compounded that effect. However, if you are a pasta connoisseur, I could see you choosing this one as your favorite.

The cauliflower version had no macaroni, but the cauliflower was a tasty substitute. The veggies were cooked well — not too mushy but with a soft, satisfying bite. The cheese sauce was light and clung well to the cauliflower.

While nothing beats homemade, I’m glad that A-House and the Black History Month programming made the space to honor mac and cheese. Check out next week’s final Melanin Monday, Feb. 22, where the theme is Notable People + Notable Dishes. For other information about Black History Month events, check out this flier. 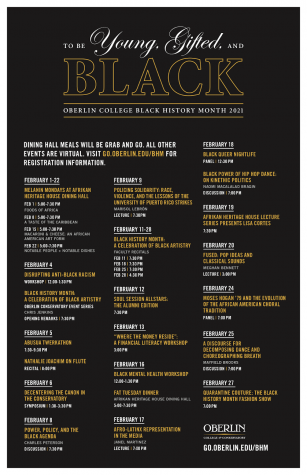