In The Locker Room With River Schiff, Dual-Sport Athlete and Trans Advocate 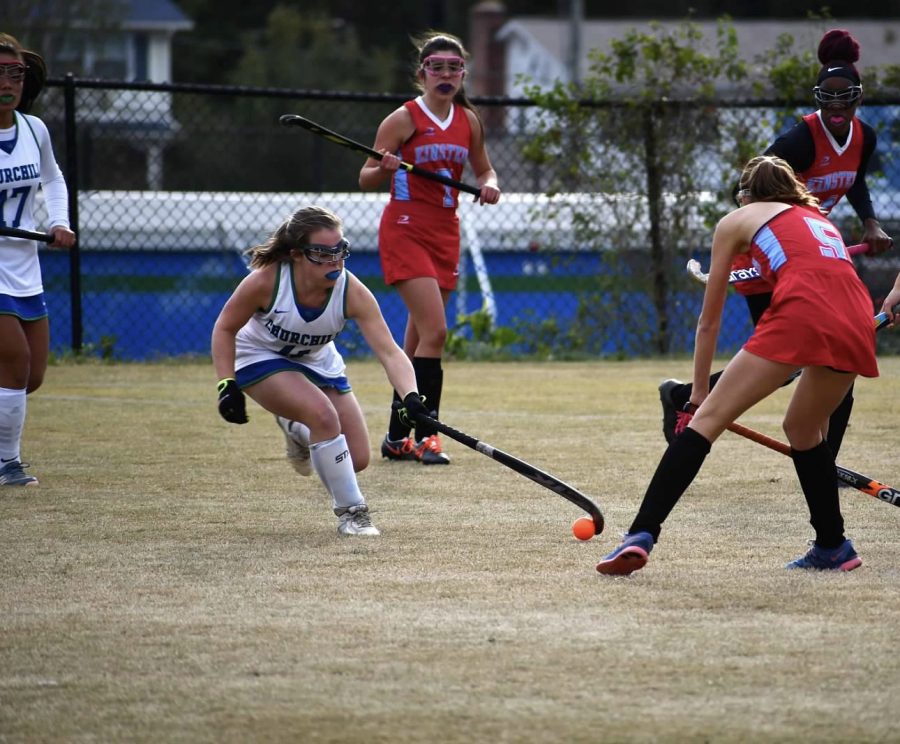 College first-year and dual-sport athlete River Schiff can often be found getting in an extra round of field hockey and wall ball for lacrosse between their actual practices. They have been playing field hockey for most of their life and came to Oberlin to pursue their academic and athletic passions. Schiff runs an Instagram fitness account in their free time and is working to make Oberlin athletics more inclusive for transgender athletes. They discuss a range of topics on social media — including field skills, their experience as a trans athlete, and navigating unique challenges relating to dysphoria and self-confidence in athletics.

How old were you when you started playing both field hockey and lacrosse? What made you want to get into those sports?

I think I’m coming up on 12 or 11 years of playing field hockey — since second grade. My parents asked me if I wanted to play soccer, and my insecure second grade self was like, “No, everyone starts soccer in kindergarten. I am in second grade, I could never catch up.” And then they were like, “Okay, so we found this other sport…. It’s called field hockey. Here’s a stick.”

We didn’t really know what it was, but I loved it. Then I started lacrosse my sophomore year of high school. It was kind of a way to stay in shape, but I ended up really liking it. I talked to Coach Russell, [Oberlin’s women’s lacrosse coach], on my second prospie visit for field hockey, because I had told my field hockey coach that I wanted to look into doing lacrosse, and she was really supportive.

It’s no secret that you’re a really great field hockey player. I’ve heard you have some nice swag in terms of field hockey gear,  can you talk a little about that?

Yes, I am sponsored by this low-key stick brand. They’re called Otter Hockey. Originally when I got into the sponsorship, it was only players in the UK. So I like to say I’m the first person in America with a stick! Over time, it’s gotten pretty big and they have a bunch of sponsors that are national players and play internationally — and are really great. I’m just here like… I play Division III field hockey? But it goes along with my fitness account which is nice!

That’s still really impressive! Can you talk more about your Instagram, and what you’re doing on there?

Originally it started as a stick skill account where I just wanted to have fun with my friends. Then I remembered that I still had this account about two years after I had originally created it and I was going through a time of self-improvement — I still am — and I just want to post my journey and give people inspiration and share my story. I like to make use of the platform now. It’s not very big, but I just like to inspire the people that follow me. Probably about half of my followers are friends and teammates, past or present, but I really like being a voice for them. The account has definitely taken a little bit of a twist ever since I came out as like non-binary, transmasc, and now I incorporate dysphoria and stuff like that — and how that influences my field hockey and lacrosse content.

Going off of that, recently it’s been brought to my attention that there are many rules and regulations around gender within the National Collegiate Athletic Association, one of those rules being that if an athlete starts taking testosterone, they can no longer compete on a womens team. Will you be able to continue to play field hockey? What are your thoughts on this policy?

For women’s sports, you’re not allowed to be on testosterone. One of my other friends here on the cross-country team, after he started testosterone, he had to wait a year to compete. I don’t know why, but he was basically out of competition for a year until forms and all that technical stuff could go through. It’s really tedious and really annoying. For field hockey though, there is no other team I could play on, which makes it hard to navigate. I’ve been trying to work through this with my coach because field hockey has been one of the biggest parts of my identity for so long. Before I came out, I was known as the field hockey girl. That was me. But now that I have come to terms with my gender identity, it feels like I have to kind of put one over the other, and I’m trying to balance that.

Has the athletics department been supportive? What do you think the next steps are for Oberlin athletics and helping trans athletes?

Everyone has been supportive. Everyone’s super understanding of me, it’s more just that no one really knows what to do with me. I just exist and they’re just kind of like, “Okay.” But, I’ve talked with a couple of athletes and we all really want to push forward with trans athlete awareness and see what we can do with the NCAA to be more inclusive. One possibility for me specifically, as a field hockey player, is turning field hockey at Oberlin into a co-ed sport. I talked to my coach about it and it is possible, but there’s a lot of drawbacks. Our games that people play against us will not count for the record and we will not be eligible for any NCAA tournament’s, which would suck. I’m very adamant to change things though, because always pushing for the next level is what keeps me going as an athlete.