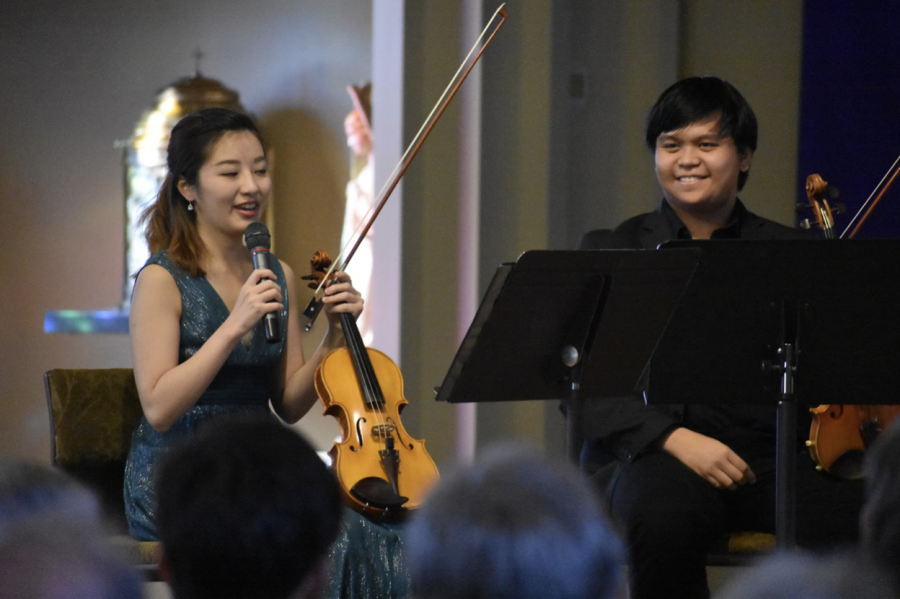 The Sacred Heart Concert Series gives Conservatory musicians such as fourth-year Yuyu Ikeda and third-year Johnum Palado a low-stress opportunity to perform the music they love.

Every month at Sacred Heart Catholic Church in Oberlin, the Sacred Heart Concert Series stages free chamber music concerts open to all. Run entirely by Conservatory students, SHCS seeks to share the joy of classical music with the broader Oberlin community while also highlighting the artistic and collaborative talent of student musicians.

Conservatory third-year Simon Housner, a cellist, founded the project in 2019. He was inspired to create a student-run concert series by his experiences at summer music festivals, as well as informal chamber music sight-reading parties at Oberlin.

“One night I just woke up at 3 in the morning due to a nosebleed, and I was reminiscing about these musical festivals,” Housner said. “And I was like, ‘You know what, why don’t I just start a concert series?’ Why not bring this kind of atmosphere — this atmosphere of making music for fun, instead of playing music as a chore — why not bring it into the community? You have this freedom to play, to program. It’s the kind of music that’s dear to your heart, and it’s music that you’re interested in sharing.”

As a parishioner at Sacred Heart Catholic Church who attends weekly masses, Housner saw the church as an appropriate place for a concert series that could reach a diverse new audience.

“Church [Music] Director Carl Lee and Father David Trask were generously open to the idea of launching the project,” Housner said. “I started the first concert with my sophomore recital, and roughly 150 people attended. And from then on before COVID-19, we had a consistent and sizable audience of Oberlin residents and parishioners.”

While attendance has decreased over the past year, SHCS has been able to safely conduct in-person concerts during COVID-19.

“Almost surprisingly, all the reception has been really good, even in COVID times,” said Ben Jalensky, advancement director for SHCS. “People are craving that live music experience, and we do it safely — socially distanced and masks and everything like that.”

The SHCS also aims to help performers with their personal and professional development by asking them to meditate on their purpose as classical musicians. To help prepare musicians for the promotional aspect of performing in the classical music field, the series’ organizers interviews every musician to learn about their personalities and perspectives as artists.

SHCS also provides students with an opportunity to envision themselves as a part of Oberlin’s wider community. Conservatory third-year Johnum Palado, who also serves as SHCS’s artistic director, noted the warmth with which the concert-goers welcome the musicians.

“There is one parishioner named Jack, and he actually used to be an Oberlin College staff member, and after we finished playing Beethoven’s String Quartet No. 131, he cooked us chicken, rice, and broccoli for us to eat after our performance,” Palado said. “That just further shows, you know, the extent of the love and embrace of the Sacred Heart community.”

Housner’s most memorable experience with SHCS was its second-ever concert.

“This was around Christmas time, and we did a complete performance of Tchaikovsky’s Souvenir de Florence,” Housner said. “At the end of the concert, the entire audience stood up and began singing Christmas carols, and we improvised along with them. That is a completely different experience from a concert hall. … I realized that the essence of music is moldable because it takes a different form depending on the space it is delivered.”

SHCS’s upcoming concert will be held on Sunday, March 21, at 5 p.m. EDT at Sacred Heart Church. It will also be livestreamed on Facebook. A full list of concert dates can be found here. To learn more about SHCS artists, click here.