First-Year Musicians Get Their Oberlin Groove 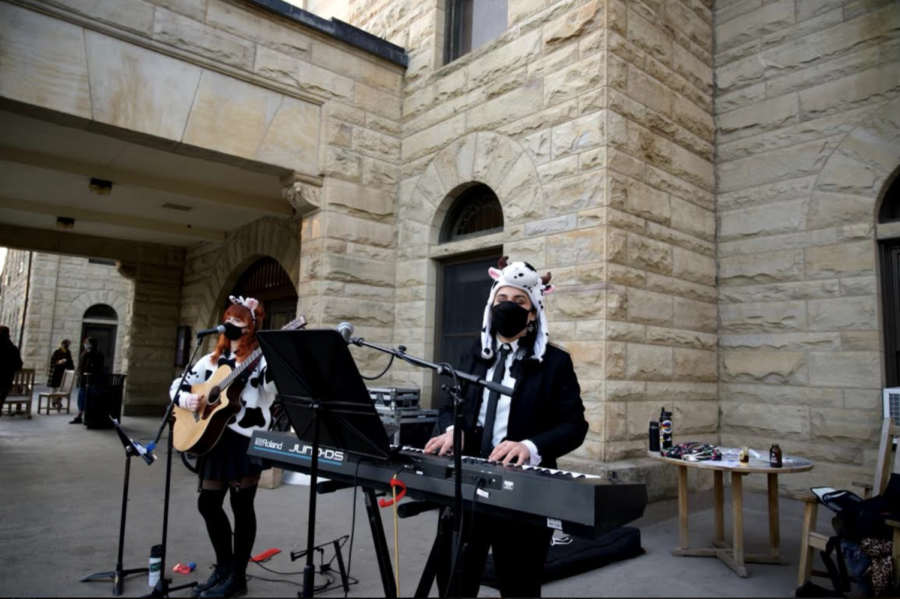 College first-year Sarah Krohn and Conservatory first-year Daniela Jiménez gave a concert for other students in Wilder Bowl during in one of the first COVID-safe performances of the spring semester.

The suspension of concerts at the ’Sco, slam poetry nights at the Cat in the Cream, and live theater hasn’t stopped first-year musicians from creating their own opportunities to perform for their peers.

This past Friday, March 5, College first-year Sarah Krohn and Conservatory first-year Daniela Jiménez jammed out in Wilder Bowl. Students gathered for a rare opportunity to dance and sing along to songs like “Never Gonna Give You Up” by Rick Astley, while still abiding by the ObieSafe guidelines.

“Concert Sound said there are usually so many opportunities, and there are so many bands that come and play, but that they haven’t had anyone in months,” Krohn said. “So they were so excited to finally do it again.”

It took a plethora of back-and-forth emails and Zoom calls among Krohn, Jiménez, and others who helped put the show together.

“You know, if you want to do it, you have to find a way to get there,” Jiménez said. “It’s definitely possible. It wasn’t hard for us to figure it out.”

This year, many students have felt the loss of communinal music making and performance. College first-year Tyler Reid is a part of the Oberlin College Choir and Oberlin Gospel Choir, and she is looking forward to the day in-person rehearsals and performances come back.

“I knew Oberlin was a very music-heavy institution, and that kind of drew me toward it as a musician,” Reid said. “So getting here and then having to work around all of these guidelines for the pandemic has kind of been hard. At the same time, I’ve kind of taken this time to learn from upperclassmen about when it’s not COVID anymore.”

Krohn and Jiménez have high hopes of starting a band and performing at the ’Sco and the Cat and the Cream in the near future. The Wilder Bowl concert was a jumping-off point for them to meet new musicians and continue making live music.

“It was nice … that we did find a way to still do it even though not many other people have done it,” Krohn said  “I feel like it’s a nice way to get into it because now I know the people, and I definitely want to do more things like that.”

For Reid, this year has still been a valuable time to practice making music remotely in preparation for the return of live performances.

“It’s challenged me to push myself in terms of skills that I already had,” Reid said. “I already have decent tonal memory, and in rehearsals last semester for College Choir, you just hear your part once and then have to remember it for the rest of the semester. One of the most fun parts of choir for me is making music as a collective.”

While the loss of live student performances at Oberlin is particularly disappointing among musicians and performers, new opportunities are being created. Meanwhile, as guidelines loosen, students who’ve missed out on performing can look forward to doing so in the future.