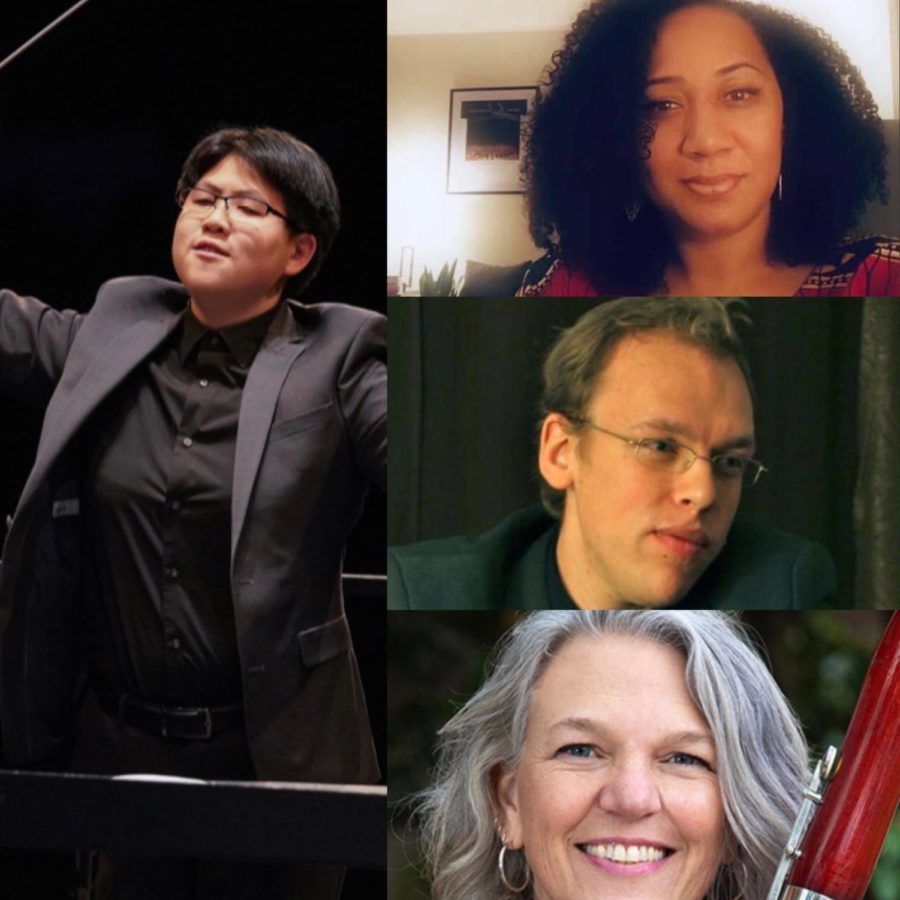 As Oberlin arrives on the one-year anniversary of sending students home, students and alumni alike are reflecting on the impact that COVID-19 has had on their academic and professional careers. For many professors of music, the pandemic meant drastically readjusting their lives and music practices. But even as COVID-19 jolted their field, Conservatory alumni showed their flexibility, strength, and resilience.

Nicolasa Kuster, OC ’93, studied Bassoon Performance and Religion. She began working at the University of the Pacific Conservatory of Music in 2008, where she teaches and serves as an associate dean. Until March of last year, Kuster also played frequent recitals up and down the West Coast, filling her free time with performance. As the University of the Pacific Conservatory went online, Kuster had to adjust her teaching style to incorporate more virtual elements — which presented some difficulties for both her and her students. The recording process changed the way they related to the music.

“Putting yourself into video, being watched over and over, paused and scrutinized, it makes it harder to give in to the moment,” Kuster said.

All of Kuster’s regular performance gigs also went online, so she understands the added stress of virtual performances. But with fewer live performance opportunities and more time alone to practice, Kuster rediscovered her internal motivation to play the bassoon, instead of simply practicing for performances.

“I used to play for people,” Kuster said. “After months of this process, I realize now, I am a bassoonist, I play the bassoon. I can be a bassoonist during the pandemic — even if I have no gigs.”

Ilya Friedberg, OC ’07, was born and raised in Israel before coming to Oberlin as an international student. Prior to the pandemic shutdown, Friedberg was using his degree in Piano to teach students at the Music Institute of Chicago.

Friedberg had a slightly different experience in adapting to remote learning. When the Fine Arts Building in Chicago closed, he couldn’t teach and lost access to his piano. With no teaching position and his concerts canceled, Friedberg had to shift his career path.

He pivoted toward recording, helping multiple contemporary composers share their music. In Oct. 2020, he moved to Berlin, where he has been working the past few months with another composer. Rerouting his career was a challenge for Friedberg, but that challenge also offered him an opportunity to reflect.

“I think for everyone, or at least for me, the pandemic was a spiritual wake-up call to realize what’s important in life,” Friedberg said.

Tiffany Chang, OC ’09, returned to Oberlin as an assistant professor of conducting. On top of conducting the Oberlin Arts and Sciences Orchestra, Chang also uses her talents as an assistant professor at the Berklee College of Music. Before pandemic travel restrictions, Chang used to fly back and forth between Oberlin and Boston multiple times a week. When the pandemic began, travel was limited, so Chang locked down in Boston as both schools switched to remote learning.

“Those first few weeks were a scramble because we had to reinvent everything as it was happening,” Chang said. “There was no prep time.”

To address the distance from students, Chang planned virtual activity sessions with students and switched their live performance to a virtual one. Chang helped OASO produce a short clip of Gioachino Rossini’s William Tell Overture. That first recording in April 2020 was a valuable learning experience, and OASO has since collaborated with the Oberlin Dance department, as well as the University of Rochester’s orchestras and Chamber Singers.

Chang is glad that virtual performances have increased in popularity during the pandemic and hopes that they will continue beyond the pandemic.

“Since the expansion of virtual performances, music has reached people that it would not reach when it was confined to the concert hall,” Chang said.

Courtney-Savali Andrews, OC ’04, joined Oberlin’s faculty in Jan. 2020 as a visiting assistant professor of ethnomusicology, with a focus on Afro-Pacific expression. Andrews barely had time to settle into her role before the COVID-19 pandemic changed her life, both professionally and personally. Like others, she scrambled to move her Oberlin students online. Much of her teaching focuses on the cultural value of moving to music, which was difficult to translate to a remote format.

“Looking for students to react to the music is difficult, or even just to read off this flat surface,” Andrews said. “You’re completely cut off from those engagements.”

Despite the lack of traditional ways to bond over music, Andrews appreciates the innovative ways people have been connecting with one another through pandemic restrictions. She pointed to the example of virtual music battles, which bring music fans together with the same level of passion and excitement as in-person events. However, Andrews still eagerly anticipates the pandemic’s end and the newfound appreciation we will find for human interaction when life returns to normal.

“As we get beyond the threat of the pandemic, we’re just going to be running wild to connect, and it’s going to feel really awesome,” Andrews said.

After a year of remote pedagogy and performance, the Oberlin community, near and far, looks forward to bringing people back together through music-making.