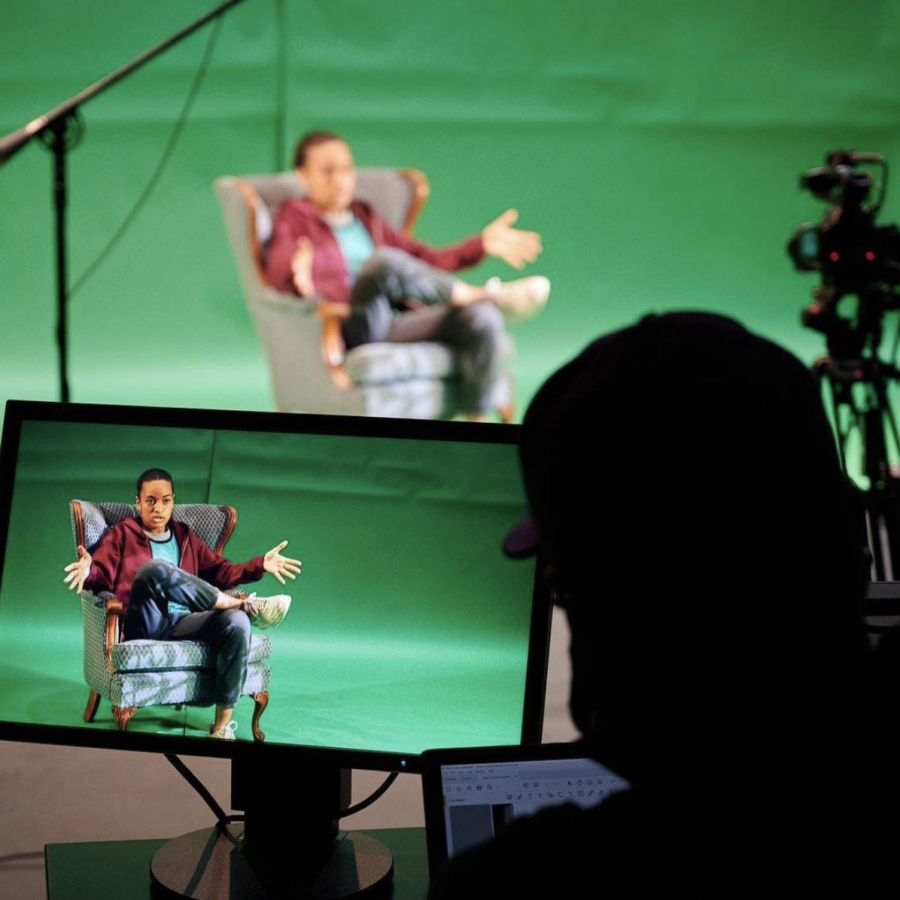 College first-year Vera Grace Menafee performs a monologue from Fires in the Mirror in front of a green screen.

Fires in the Mirror explores the 1991 Crown Heights Riot and focuses on topics of identity, community, and racial division. Director and Visiting Assistant Professor of Theater Jason Dorwart chose the play — which premieres this weekend — for a mainstage production at Oberlin to home in on these themes, which are especially timely in the midst of Derek Chauvin’s trial for the murder of George Floyd.

“At this moment in history, I think a play like Fires in the Mirror will really connect with people,” Dorwart said. “It’s timely in its themes. Plus, it’s monologue-based. There aren’t any scenes where actors are on stage together, which meant we could film it in a very safe, socially distant way.”

All of the show’s monologues are based on real interviews that creator Anna Deavere Smith conducted. Originally, Fires in the Mirror was written and performed as a one-woman play, with Deavere Smith transforming from one character into another between each scene. Oberlin’s production features a cast of seven, dividing the work between the actors while still allowing them to play multiple roles.

“This play is about trying to take on others’ identities,” Dorwart said. “It’s about understanding where somebody else is coming from. So, I made sure that each of the actors played at least one character that they wouldn’t necessarily identify with.”

Many actors were cast in roles that play against type. In his direction, Dorwart stressed the importance of setting aside all preconceptions.

“You have to leave your biases outside of the rehearsal room, and you can’t judge a character you’re playing through your perspective,” Dorwart said.

“For me, acting is all about the practice of empathy,” Menafee said. “Playing all of these different people really pushed me to tap into what they were feeling when they were interviewed.”

Menafee also felt that playing a real person, rather than a fictional character, comes with a heightened sense of responsibility.

“I didn’t want the roles I played to feel like caricatures,” Menafee said. “I was very careful about that, about centering these people as people — people that led lives and are full of stories. I wanted to be respectful to them.”

“I worked on a show a while back called The Laramie Project, which was a similar style of verbatim theater, so I did enjoy being able to play real people again,” Mathebula said. “I watched a lot of interviews that I was able to find with all of the characters [I played] and wrote notes on them, first on their mannerisms, second on the ways they spoke.”

In order to avoid Zoom-related hiccups and allow for casting off-campus students, Fires in the Mirror has been pre-recorded. However, Dorwart stressed that the recording, which will be streamable online, was designed to feel as similar to an in-person performance as possible.

“I approached Fires in the Mirror as if it were a live performance,” Dorwart said. “I didn’t want to think of this as a film that you could tweak and edit — the actors were filmed separately, but all of their monologues are single shot.”

Ultimately, Dorwart recognizes that there is an upside to the fact that this production has gone digital: This format is more accessible to those outside of the Oberlin community.

“Everybody should invite their friends to watch the production,” he said. “Even friends that don’t go to Oberlin! This is an opportunity for us to reach out past our campus.”

Fires in the Mirror will be available digitally for viewing from Friday, April 2 until Sunday, April 4. To register in advance, use this link.