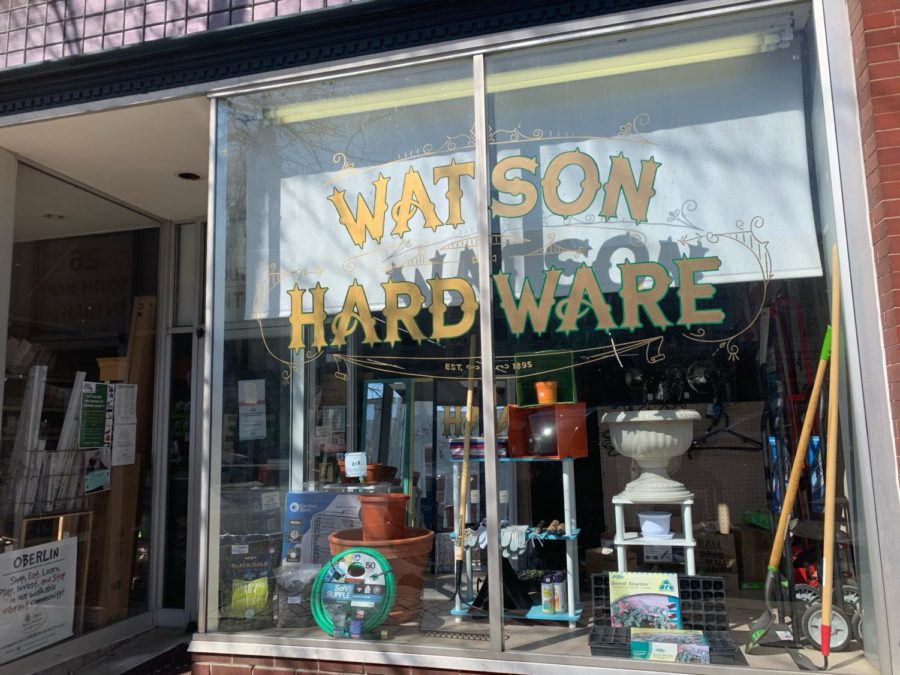 Watson Hardware has been an essential part of Oberlin’s downtown area since 1895. In the next month, some of Oberlin’s small businesses will be eligible to receive government aid through President Joe Biden’s American Rescue Plan Act.

For some of Oberlin’s downtown businesses, the warming weather has coincided with an uptick in sales and hopes for a busier second quarter. After a hard year due to the pandemic, owners and managers are excited at the prospect that the vaccine rollout and summer trimester will bring economic recovery.

In the next month, some of Oberlin’s small businesses will be eligible to receive government aid through President Joe Biden’s American Rescue Plan Act. Key parts of ARPA included adding $7.25 billion to the Small Business Administration’s Paycheck Protection Program, and $28.6 billion to its Restaurant Revitalization Fund, which is dedicated to restaurants most impacted by the pandemic. According to Jessa Klotz New, OC ’01, owner of Slow Train Cafe and The Local Coffee & Tea, applications for SBA funding will open around the end of April.

“I’ll plan on applying to that for sure,” Klotz New said. “We’re not quite sure yet what it’s going to go towards other than keeping the business afloat, … but it would be wonderful to be able to actually do some things to improve business. … We could use a couple of pieces of new machinery and maybe some new outdoor tables. That would be exciting.”

While Klotz New is excited about the increased financial support, stipulations for SBA funding have denied eligibility to similarly struggling businesses. With fewer than 10 employees, Kim’s Grocery & Carry-out did not qualify. While Watson Hardware has a similar staff size, Jerry Anderson, owner and operator of Watson Hardware for 13 years, isn’t yet confident how the ARPA will impact him.

“If I get a stimulus check, I’ll just plow it back into the business,” he said. “Just to keep things alive.”

“There has been more of an economic impact this year than there ever has been from students,” Anderson said. “This last group that came through has been spending more serious money.”

Lewis Nunley, the general manager of Kim’s Grocery & Carry-out, said they’ve started to see greater patronage that is beginning to move business back to normal levels.

“The first quarter is just somewhat getting back to normal, as far as students being here,” Nunley said. “So it’s been a real big difference with them being here on campus [and] giving us a little bit more business.”

For some, the windfall was less than expected. Klotz New appreciated seeing her third-year employees return for the spring semester but did not experience a large uptick in demand.

“I did expect a little bit bigger of a boost, but you know, we’re lucky just to be in business at this point, so I feel satisfied with that at the moment,” Klotz New said.

Similarly, Aladdin’s Eatery has depended on its loyal following to stay afloat since last March.

“Luckily we have amazing supporters, which have kept us going, but we definitely did see a huge drought on the sales,” said Aladdin’s General Manager Forrest Locklear.

Kim’s is experiencing a similar downturn. According to Nunley, the departure of students last spring, particularly Asian international students, eliminated half the store’s business. With many of these individuals still studying remotely, this remains a challenge facing the grocery store.

“There are way less Asian students, which really hurt us because the Asian students were probably the main ones that were buying groceries in particular,” Nunley said.

“Fingers crossed,” he said. “I’m very, very excited to see what happens for the smaller commencement. Hopefully that will be a nice spike.”

Klotz New shares the same optimism, and predicts that several businesses in town even stand to make a significant recovery over the next few months.

“I think it’ll be a nice chance for the businesses in town to recoup some of what was lost over the last year by having a slightly busier summer than we normally have,” Klotz New said. “I’m looking forward to that.”

Small business owners aren’t only excited about economic recovery — they also appreciate the social energy students brought to Oberlin after an empty season. Anderson welcomed the return of students in February with relief.

“When the students came back, it was like a breath of fresh air,” he said.

As the weather improves, Oberlin’s small businesses will call on students to stay afloat. The support will be vital to ensuring that long-established locations will continue to thrive. Though it’s passed through different hands, Watson has been in the hardware business since 1895. The support is just as crucial for younger locations — Klotz New has strong hopes students will continue Slow Train’s 11-year stretch.

“I think the biggest thing is to just encourage people, if they feel safe to continue coming to us, because we need it more than anyone can imagine,” Klotz New said.