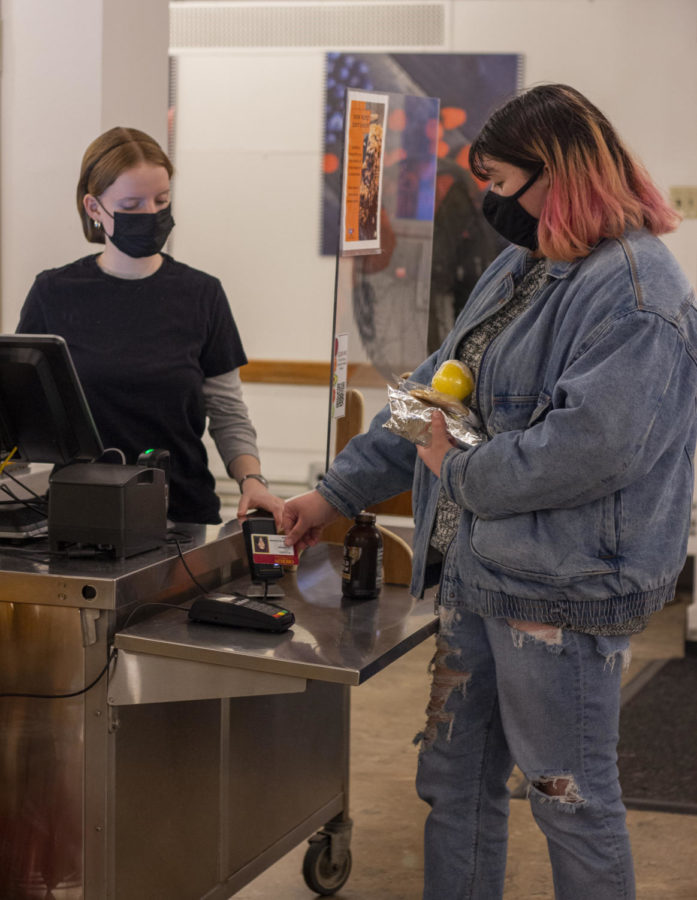 Oberlin’s dining hall workers signed a four-year union contract with AVI Foodsystems through the United Auto Workers in February. Negotiations between the dining workers and AVI started in September and ended in October, followed by a ratification vote in November. The contract follows the College’s controversial decision to outsource custodial and dining positions last summer, which some described as union busting.

Jake Reed, who works in Stevenson Dining Hall, has been doing union work for the past five years and was the Union Chairperson during negotiations this year. Reed says negotiations with AVI went well.

AVI administrators reached out to UAW Region 2B, which covers Ohio and Indiana, when they set up on campus.

“Knowing how important the union was to the campus, yes, we proactively contacted the UAW to ensure we were doing our part to ensure a successful transition,” wrote Caleb Crandall, Resident Director of Oberlin’s chapter of AVI in an email to the Review.

AVI came to Oberlin during a tumultuous time. Just a few months earlier, students organized multiple protests — some boasting a turnout of over 500 students, faculty, staff, and alumni — calling for the College to not outsource. Still, Crandall was optimistic from the beginning.

“I did not expect the negotiations to be contentious,” Crandall wrote. “We got to campus in the summer and started fostering relationships with all team members, which I found everyone to be receptive to the new family culture we were building. By the time the first negotiations began, Jake Reed (union chairperson), Bob Amundsen (union steward), and myself had a good understanding of one another. Our rapport was good.”

The College previously worked with the Bon Appétit Management Company and switched dining vendors to AVI at the start of this academic year. For many dining workers, this time of transition felt precarious. They did not know if AVI would rehire them or if they would have similar pay and benefits to those they had through the College.

“It was scary,” said Amundsen, who works as a cook in Stevenson, and is also part of the negotiation team. “It was kind of like one day we thought we were out on the street and the next day AVI came in and told us that they would take any of us. So that was cool. At the start, there was a lot of uncertainty, but now I’m still thankful that we don’t have anything to do with the College anymore. Because these guys are great. It seems like a much better company.”

AVI rehired 43 people from the former dining staff. However, the company that custodial services were outsourced to, Scioto Services, only rehired one former custodial employee and Scioto’s workers are not currently unionized. AVI also hired some of the College’s custodial staff who did not get their jobs back through Scioto.

“We wanted the best people for the jobs available and there was so much talent already on this campus,” Crandall wrote.

During the union negotiations between AVI and the dining hall workers, they worked with pieces of the contract that employees had with the College and pieces from another contract that AVI had with a different food service establishment.

“We were just going through it line by line,” Reed said. “We have a really comparable contract to what we had with the College. There’s some things that they insisted on having and we gave them and I think in return, they gave us a lot back that we had before.”

The new contract retains many of the benefits that the dining workers had with the College.

“We’ve kept our same pay and our seniority, and vacation time,” Reed said.

While AVI could not comment on how much their employees make, Reed said it was anywhere between $21 to $25 an hour. Additionally, AVI was able to offer employees comparable health insurance and retirement benefits.

“Medical is costing a little more, but it’s still reasonable, but I believe dental and optical are cheaper, so I think it all shakes out,” Reed said.

Amundsen said that while there were small compromises, the contract they agreed upon in the end felt fair to him.

“It wasn’t really unlimited, but it was kind of like the unlimited sick time that we had with the College,” he said. “We don’t have that anymore, but that was not a huge deal because we were so spoiled before. So yeah, we didn’t really make any concessions, like big ones. I thought it was fair.”

For Reed, the switch to AVI brings desirable change.

“The jobs are a little different than we used to and I think we’re serving better quality food now,” Reed said. “We have better schedules now than we ever had when Bon Appétit was making our schedule. Most people want to work Monday through Friday shifts, and now we have a lot of them. We had very few of those before.”

The relationship between AVI staff and management is not adversarial, according to Reed.

“We can sit down and have a conversation with them and we usually work everything out really well,” Reed said. “The other thing is, we work for AVI, so we’re invested in the company, you know what I mean? We want them to be here too.”