We Gon’ Ride: Concrete Cowboy and the Black Experience 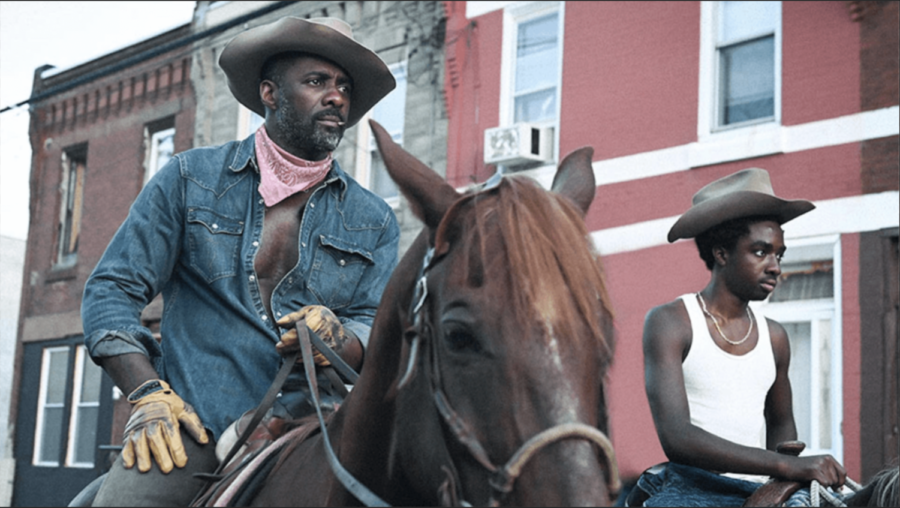 Concrete Cowboy, a new film on Netflix, is emblematic of this moment in time for Hollywood and for the country as a whole.

When the credits finished rolling at the end of my first watch of Ricky Staub’s new film Concrete Cowboy, I was sitting in bed, struggling to choke back tears. Immediately, I sent my family a text that read: “Concrete Cowboy. Must watch. I haven’t cried so hard in so long.” Then, I told a friend, “Concrete Cowboy isn’t a perfect movie, but it’s a perfect movie for me.” Now, having seen the film a total of three and a half times, I can confidently say that none of those initial reactions were overstated. In fact, I’d argue that Concrete Cowboy is emblematic of this specific moment in time for Hollywood and the country as a whole.

The film follows troubled 15-year-old Cole (Caleb McLaughlin), who is sent to live with his father, Harp (Idris Elba), in Pennsylvania after being expelled from his Detroit high school. While there, Cole learns that his father is part of the Fletcher Street Urban Riding Club, a group of modern-day cowboys — complete with horses, stables, and cowboy hats — in the heart of Philadelphia. Cole also reconnects with his old friend Smush (Jharrel Jerome), a local drug dealer embroiled in a neighborhood power struggle. Hanging over the whole situation is the constant, pressing threat of gentrification, which has already shut down several other urban riding clubs.

As expected, McLaughlin, Elba, and Jerome live up to their usual standards and are fantastic. But the biggest surprises come from real-life Fletcher Street Riders Jamil Prattis and Ivannah Mercedes, whose performances as fictional riders Paris and Esha overflow with heart. The movie does a phenomenal job of hitting its emotional beats, and Cole’s journey from angry teenager to full-blown cowboy is beautiful to watch. Additionally, if you’re a music fan, the soundtrack manages to capture and enhance the tone of every scene perfectly.

All that said, Concrete Cowboy’s biggest strength is much harder to put into words. The film manages to take real-life issues that plague the Black community, such as drugs and gentrification, and make them major story beats without becoming mired in pain. This quality is what makes Concrete Cowboy special. While many films about the Black experience focus on hurt (12 Years A Slave, Juice, Precious, etc.), or consider on-screen representation to be about maximizing diversity (Black Panther, Spiderman: Into the Spiderverse, Soul, etc.), Concrete Cowboy manages to discuss these real-life problems without making them focal points. It falls into a category of Black film with stories like Get Out or Sorry to Bother You — films that can be viewed with either the intention of spurring discussions about race, capitalism, and other difficult topics, or purely for entertainment purposes because they’re just so well-made and engaging.

None of this is to say that films like the aforementioned Black Panther, Spiderman: Into the Spiderverse, or Soul need to go in-depth in their analysis of race relations, nor is it to say movies that focus on Black pain and suffering like 12 Years A Slave, Juice, or Precious need to be watered down to make them more enjoyable. Personally speaking, I thoroughly enjoy all of those movies. But I want to highlight how Concrete Cowboy has struck a rare balance between the two dominant types of narratives in which we see Black people on the silver screen.

Concrete Cowboy’s biggest issues stem from its overstuffed plot. Because I went in expecting cowboy hijinks, being blindsided by a drug dealer subplot made me roll my eyes in a “here we go again” type of way. There are so many fascinating characters, including every single member of the riding club, that it feels like everyone other than Cole and Smush gets short-changed when it comes to screen time. Similarly, there are a few too many scenes serving solely as cool vignettes, without advancing the plot or assisting in character development. But all of these sins can be forgiven because Concrete Cowboy does so many other things well.

Viewers will watch Concrete Cowboy differently depending on the context of their watching it and what identities they hold. There is no way to encapsulate all of these different perspectives in a single review, but as a Black man, the film resonated with me deeply. Each character is passionate about something and just wants to be able to pursue their goals in peace, but because of forces well outside their control, they struggle. Everyone we follow in the film is one of the “good guys” in their own narrative, and the movie shows us this. However, to the other characters, whether they be drug dealers, a school principal, or animal control, our “good guys” can easily become someone else’s villains.

Throughout Concrete Cowboy there is a constant sense of unease as you wait for things to go wrong for the characters — that is what we have seen over and over again in stories centering on Black people. But while the characters face obstacles and struggle, Concrete Cowboy is in no way a by-the-numbers film about Black pain. Even as I sobbed through the end credits, I view Concrete Cowboy as a story of triumph, overcoming odds, and resilience, a word that might as well be synonymous with the Black people. When you finish Concrete Cowboy, you may — like myself — be left devastated, asking yourself, “What do I do now?” But Elba’s Harp answers that question, telling us point-blank what comes next not only for the cowboys in the film but also for Black people in general:

“We gonna do what we always do. We gonna ride.”

You can stream Concrete Cowboy on Netflix and, while you’re at it, donate to the real-life Fletcher Street Urban Riding Club here.