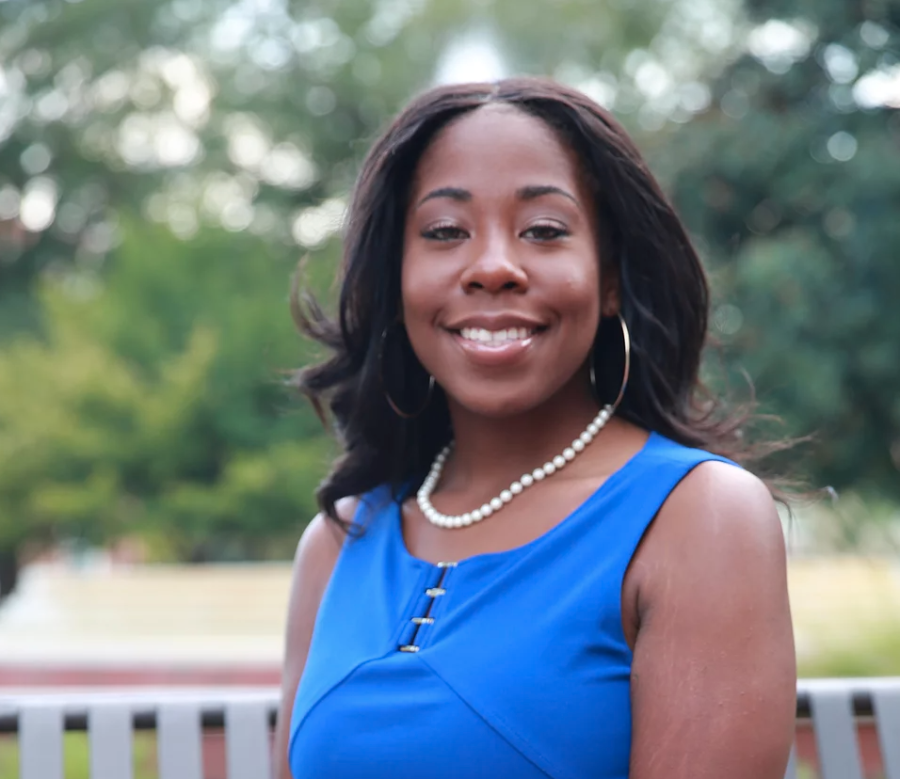 Temptaous Mckoy is an assistant professor of English who specializes in technical writing at Bowie State University. Mckoy earned her PhD from East Carolina University with her award-winning dissertation, “Yall Call it Technical and Professional Communications, We Call it #ForTheCulture: The Use of Amplification Rhetorics in Black Communities and their Implications for Technical and Professional Communication Studies.” She led the “Deconstructing Professionalism” and “Inclusive Professionalism” workshops for the Career Development Center’s Senior Launch Program, which concludes this week.

What advice do you have for current students or graduates who are trying to navigate their identities and professional expectations?

I’ll point to some of the work of Dr. Cecilia Shelton, who joined me in that workshop. One thing that we’ve both been able to think about and point to is that you have to first do your own assessment of the risks that you’re willing to take. There’s a whole lot of risk that I’m willing to take that I know other people are not. I will curse in the classroom. I ain’t gonna cuss a student out, but I’d maybe say, “Damn, this is making me mad. What the f**k is happening?” But there are a lot of people that will not take that risk in the classroom because they understand what that means on their body. I’ll do it because it’s a rhetorical move. It’s very intentional. There’s a reason why, if you get mad and you stub your toe, you say, “S**t!” instead of being like, “Oh man, that hurt,” right? There’s a reason why that happens.

So when you do your own assessment and reflect on what your risks are, then I think you can start to make the call on what it is you want to do or what you want to present yourself as. I know in one of the sessions, a student asked me, “Well, you know, you’re wearing a T-shirt. Can I wear a T-shirt to an interview?” But I got three degrees, too. I got some publications. There’s a whole lot of stuff that I have under my belt that gives me the agency to do the things that I would like to do. Had you asked 18-year-old me would I have done it, probably not, because I understand that there are certain risks that I wouldn’t have been able to take at that time.

The second thing that I always suggest — if you yourself are not willing to take the risk — don’t hate on someone else who is. Don’t become a part of the problem; support them in what they are doing instead.

The beautiful thing with our generation and the generations younger than me is that we’re the ones that get to say, “No, to hell with this. Y’all are tripping.” And now is a great time to enact the change. You know, granted, we got to convince people that’s my momma’s age. But even then, they don’t have to be convinced nearly as much because I’m like, “You ’bout to retire. You ’bout to sit down somewhere.” So I always just tell students to acknowledge and assess your risk, and then don’t shy nobody else’s light.

Can you tell me about your work deconstructing technical communications?

So technical communication ended up becoming my jam because I was looking at focusing on professional documents — actual HR documents, résumés — and how are those things used as weapons against people of color. That’s what my initial research focus was. But as I kept going, I started to realize there weren’t many people in technical communication who looked like me. So if the people that’s producing the documents, producing the standards, are saying “This should look like that” — if they all look the same and don’t come from different backgrounds, you’re going to keep getting the same disenfranchisement and barriers. So what I’ve done is proceed to make calls, not just for people of color to be more involved in technical communication, but for people to start considering if they thought of a Black woman as their audience for this technical document.

If you don’t have training in rhetoric, as I do, but you still aren’t interested in doing the training to learn more about diversity and equity, then your technical communication production is going to be the same. I don’t care if you’re Black, white, green — it don’t matter. You’re still having a problem.

What I want people to recognize is that you do not have to be formally educated to be a technical communicator. So when we sit down and we think of your grandmother, your aunties, your uncles — you have so many family members who are not formally trained or formally educated and are much more efficient technical communicators than the people that I work with, and it’s amazing for me to see.

I was teaching a class yesterday about how to make a peanut butter and jelly sandwich. I was telling my students that growing up, my grandmother was saying, “Oh, you need a palmful of this seasoning.” Okay. That worked when I was eight. But then I became an adult, and I got big old palms. I tried to get my grandma to understand like, “Whose palm? Your palm, my palm?” But the mere fact that she developed a way to measure the seasonings, that makes her just as effective as a technical communicator — she’s just not formally trained in what it is that I do. Technical communication does in fact happen outside of the academy, and people can genuinely learn from these practices.

Based on your work in rhetoric, what are the ways in which you think people can become more critical writers or readers?

Personally, I think it all starts with you having your one-on-one, come-to-whomever moment. Even if you don’t believe in anything, come to your moment where you realize how you’re reading a text and how you’re interpreting it and taking it in.

I think Procter & Gamble put out a YouTube video called “Widen the Screen.” The message of it was that we only show certain lenses for what Black life looks like. When I watched it, I spent the whole time tensed up because I was just waiting for Black violence to happen. I was waiting for a kid to be shot — it was the narrative that we see in the world of Black people. And then they flip it and say, “Well, no, if you widen your lens, you will see different aspects of Black life.” I bring that up because even I was sitting there tense. If I, as a Black woman, see these things and I feel that way, how does someone who may have racist ideologies see this type of imagery? And then how do they check that imagery? I see some organizations are catching it now, but I think there’s this implicit, deep-rooted thing that I don’t know how we get people to really see.

At East Carolina University, one of the major Greek houses was arrested for having a drug ring. Like they was poppin’, drugs was everywhere, right? And when you see it in the news, you see their formal, pretty, sitting-in-blazer pictures. That was what you see. But then another Greek organization did the same thing, but you saw their mugshots. That’s where people need to be more intentional.

But I do want to say that, especially on the local level and seeing student-led organization, especially student-led media production, y’all are doing so much better about that. But the thing is, I think what happens is y’all work and y’all do fabulous, and then y’all get to the workplace and are trying to fight this system where people want y’all to do one thing. In your heart, in your gut, you’re like, “No, I need to do this other thing” — but you need that check. That check be winning that argument in your head a lot of times. But as you all continue to move into leadership roles and become the ones running these organizations, I think things will start to change.

No one can give you a voice; you have a voice. That’s something that’s so critical to me when we’re talking about professional studies, technical communication, whatever it may be.

What I challenge people to do is to make space for other voices. That’s the thing that I really would like for people to do a better job at: technical communication rhetoric in life. Because what happens is, in an effort to amplify some people, I’ve noticed someone will hijack their story and center themselves. And it’s not intentional. You may be like, “Dr. Mckoy deserves equal pay. And I’m here to say she needs equal pay, and me, me, me.” And I’m just like, “Hey, Dr. Mckoy here. Can I say something?” I’m trying to get people to better see that individuals have voices of their own. It is our job as decent human beings to shut up and give other people space. We need to do better at listening more intentionally.