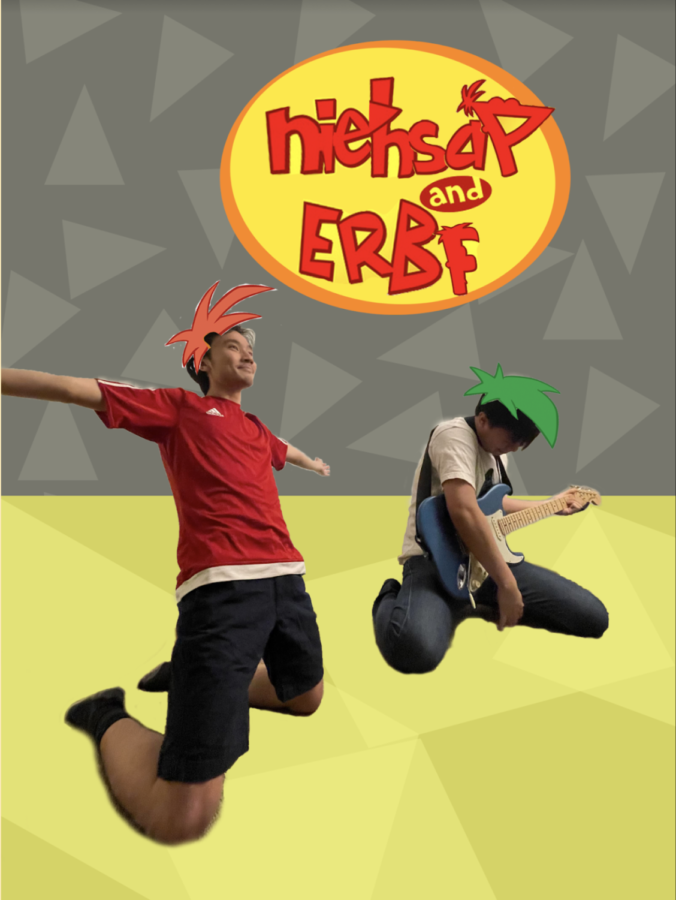 College fourth-years Minh Lam and Khang Nguyen will close out their Oberlin experiences covering songs from their mutually-beloved childhood cartoon, Phineas and Ferb.

Many students are eagerly anticipating a beloved Oberlin tradition’s triumphant return at the upcoming Coverband Showcase. This Friday’s lineup promises to pay homage to and play with an array of  genres, with a heavy emphasis on early-2000s pop classics.

College fourth-year Bridget Conway, WOBC station manager and board member, said every band in the lineup promises an impressive show. She’s personally most excited for Noname and Nirvana cover bands, Nofame and N!RV4N4.

“I am really looking forward to a Nirvana cover band with a new take on Nirvana,” Conway said. “And it seems like they’re using a lot of synthesizers.”

Like N!RV4N4, several bands in the showcase will be taking a new approach to the bands they’re covering. Phoebe Bridgers cover band Strangers in the Alps and Phineas and Ferb soundtrack  cover band NIEHSAP and ERBF both faced the daunting task of recreating a full band’s sound with just two people.

For College fourth-years Minh Lam and Khang Nguyen, the process of adapting Phineas and Ferb’s dynamic theme song for a piano and guitar proved to be a challenge.

“The theme song is super hard to play,” Lam said. “I didn’t realize it’s syncopated and super fast. …  I guess we try our best to be faithful to the energy of each of the songs we’re playing while arranging it so that it works with one guitar.”

Still, the hard work was well worth it for the two graduating fourth-years. The tribute to their mutually-loved childhood cartoon will close out their Oberlin experience. Audiences should look forward to their cover of “Squirrels in my Pants,” which Nguyen thinks will be the highlight of their set.

The collaboration between  College first-year Sarah Krohn and Conservatory first-year Daniela Jiménez, who make up Strangers in the Alps, was the natural result of occasional jam sessions.

“Before we even played music together, Daniela would just sit down at the piano and start playing one of [Bridgers’] songs,” Krohn said. “And then I would just jump in, ’cause I know all of them so well. We kind of became friends and bonded over the fact that we both like Phoebe Bridgers, and it’s taken us here.”

The pair’s tribute to their favorite artist promises to be spectacular. Krohn and Jiménez are seasoned performers — the former having sung since middle school, the latter  now majoring in Piano in the Conservatory.

Many of the cover bands found new ways to interpret a group’s sound and style. Cat Ear Headset, a Car Seat Headrest cover band, has made adjustments to its covers to meld the band’s original iteration with its latest style.

“One thing that’s unique about this artist is they revisit a lot of their old work for the new releases,” said College fifth-year and Cat Ear Headset musician Kai Becker. “So we kind of now get to have this fun time of taking the best of both worlds from the very-early-on-a-MacBook recording, and then the highly produced version.”

Cat Ear Headset plans to add a comedic element to their set, using fun, unpredictable instruments. Becker says to watch out for the electric kazoo.

Taylor and the Swifts also plan to adapt their original artist’s sound. After College third-year Alex Adelman’s Green Day cover band from last spring was split up by Oberlin’s three-semester plan, she formed the new Taylor Swift cover band with her best friends. As the punk and metal director at WOBC, Adelman said she had to work hard to adjust her own playing to a folk and pop style.

“My style is much more punk and metally like, [but] I obviously don’t want to overpower Taylor Swift is the thing,” Adelman said. “I’ve been playing on a much less distorted setting on my amp, which I miss. I just want to play it like metal, but it’s Taylor Swift. I want to respect the craft.”

Still, Adelman is excited to add an edge to Swift’s songs. Her favorite song to cover has been “Better than Revenge,” which leaves some space for a harder sound.

Students can look forward to a celebration of 2000s nostalgia. Save for N!RV4N4 and The Bikes (The Cars), all of the bands covered in this year’s lineup began between 1999 and 2016. The full setlist also includes NIEHSAP and ERBF, Strangers in the Alps, Taylor and the Swifts, Cadeveril Lavigne (Avril Lavigne), Cat Ear Headset, and Nofame.

WOBC will release a registration link soon. Interested students should be on the lookout for more information on WOBC’s Instagram page, Facebook page, and the Campus Digest. To follow ObieSafe guidelines, there will only be 150 audience spots available, but more students may get a chance to overhear; the showcase will happen outside in Wilder Bowl during TGIF, starting at 4:30 p.m.