In the Locker Room with Natalie Soord, Star Walk-On 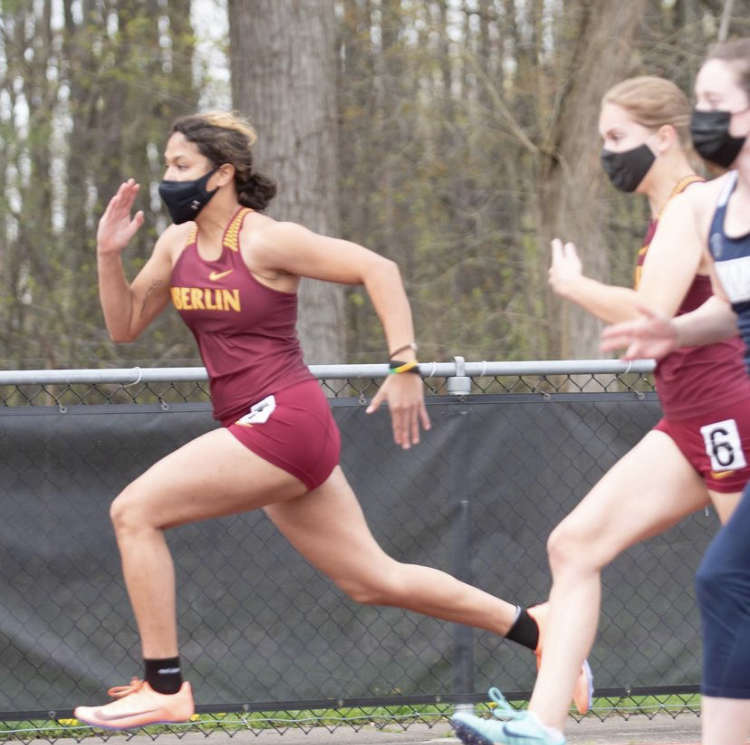 The last time College third-year Natalie Soord raced, it was her sophomore year of high school. This semester, though, she joined the women’s cross country and track and field team as a walk-on. This past weekend, Soord laced her spikes for the first time in six years and went on to win the 100-meter dash with a stunning speed of 13.89 seconds. Before she wallked onto cross country and track and field, Soord played for the Preying Manti women and transgender ultimate Frisbee team and a club Frisbee team during her first two years of college. During her time with the Preying Manti, she advocated for equity on the predominantly-white team. While she has since parted ways with the Preying Manti, her work set the standard for addressing racism on the team. Outside of athletics, Soord is on the Student Leadership Committee for the Howard Hughes Medical Institute, working to promote equity in STEM at Oberlin.

What was your motivation for joining the cross country and track and field team?

After things with Frisbee ended, I wanted to join a team that fostered a healthy community for me to be a part of. I also come from a family of runners, so they supported my decision to reach out to the track coaches. The team is really nice; it’s been a great experience so far. Everyone is super friendly to me and hyped me up during my race which I really appreciated because they all knew I felt like I was going to poop my pants because I was so nervous. The team always says that we’re a family — and I believe it — and our coaches are really great too. They really want to work with us, and talk to us about where we’re coming from and what our goals are.

How did it feel to compete in your first meet?

It was scary. I hadn’t run track in six years. I ran in high school but I had to stop because of an injury. But I always missed it. During the meet I was shaking and I’ve spent the last three weeks seeing all my other teammates compete, seeing how great they are — I was scared that I wouldn’t be able to measure up.

What was your initial reaction to winning the 100-meter dash?

I actually wasn’t sure if I won, and then they told me I won, and I was just like, “Oh okay.” I was very calm after the race for some reason, but I think it was mostly because I was relieved that it was over and I was able to leave all my stress on the track. But it felt really good. It still hasn’t really set in for me yet; it doesn’t make sense in my mind, but I know that it happened.

How has it been joining a team during a pandemic?

It was really hard to get to know people at first because my practice pod was only ten people and most of them were underclassmen — so I wasn’t really getting to know people my own age for a while, which was fine. But I had always seen the track people in my year around campus and I wanted to get to know them as well. It was harder to get to know the culture of the team when we weren’t all practicing together. Three to four weeks into the semester is when we started to do full practices — it felt kind of crazy at first because all of a sudden it was the largest number of people I was around in a long time. The bigger practices have been really fun because we all hype each other up. The energy is great.

What are your goals for the rest of the season?

I want to run as fast as I can. I was a fast runner in high school and I want to try and beat my high school time of 12.6 seconds, just to see if I can. Before college I was great at track and I had a good coach who coached me throughout the five years that I ran. She worked with me a lot and by the end I was really fast, and I never thought that I could be where I was during that time — so we’ll see if I can get there again.

How did you learn to balance becoming a student-athlete with academics?

It’s been a challenge, but I was used to it to a certain extent because Frisbee practiced three times a week — and because it’s a club sport, we would practice at random times like midnight to 1 a.m., which made it harder just because it was later at night. But having a set practice time every day takes a good amount of time out of my day, and it has meant turning down certain job offers for the time being until I get used to my new schedule.

What do you do outside of athletics?

I’m a major representative for the Geology department and I’m part of the student leadership committee for Howard Hughes Medical Institute where we promote equity and diversity in STEM, which is something that I’m passionate about. I’ve also worked in two labs in the Geology department. I was a Science and Technology Research Opportunities for a New Generation scholar with Professor Amanda Schmidt and her lab focuses on geomorphology — which is dirt science for all you non-geologists out there. I am also part of the Oberlin College Research Fellowship Program where I conduct petrology research with Professor Zeb Page.