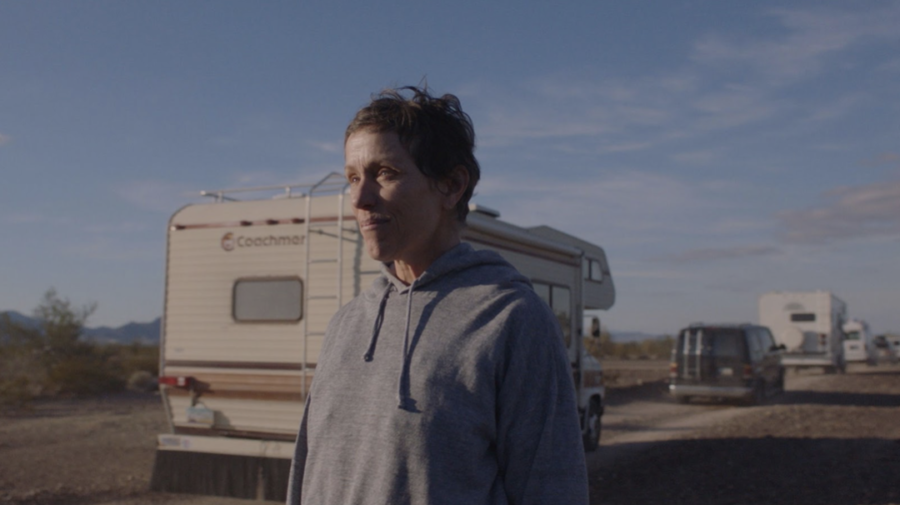 Nomadland offers a view of America not often seen in cinema. Chloé Zhao’s third directorial credit provides an intimate look into issues with capitalism in the U.S. and the economic struggles of rural communities, inviting viewers to meditate on life, death, and connection to nature.

Based on Jessica Bruder’s nonfiction book of the same name, Nomadland centers around the fictional character of Fern (Frances McDormand), a woman who lost her job and house with the closing of a gypsum mine in Empire, Nevada. The mine’s closure quite literally destroyed the town — only months later, the Empire ZIP Code was eliminated by the U.S. Postal Service. Her hardship is not only economic, but also personal — on top of her job and her home, Fern recently lost her husband. With no work left in the area and nothing to keep her there, she sells most of her belongings and begins living out of a van.

We are exposed to the cruelty of Fern’s lifestyle within the first few minutes of Nomadland. Fern uses a field as a restroom, tries to sleep through the freezing night in her van, and works under the fluorescent lights of an Amazon warehouse. A friend from the warehouse named Linda May, the first of many real-life travelers portraying themselves, invites Fern to join the Rubber Tramp Rendezvous, a meet-up of nomads held in Quartzsite, Arizona. The movie’s depiction of the event is based on a real-life gathering by the same name — the group provides a social hub for nomads, van-dwellers, and anyone whose life is defined by roaming. Some people, like Fern, are grieving a loss, or living as nomads by necessity rather than choice. Others attending the Rendezvous chose their nomadic lifestyles to search for meaning outside the constructs of mainstream American society. Over the campfire, one woman tells a story about a co-worker from her days in corporate America who never got to sail his boat before dying on the cusp of retirement.

Fern is not running from society like the ex-office worker, but she too is searching for meaning. The film follows her as she navigates seasonal jobs and habitual meet-ups with people from the Rendezvous, and as she copes with the loss of her husband. McDormand’s performance brings a perfect combination of sincerity and grit to the role, painting Fern as an independent, work-driven woman who takes pride in her self-sufficiency while still savoring the connections she makes with other travelers.

The supporting cast — composed of lesser-known actors and real-life nomads — complements McDormand well. Linda May’s performance is fabulous. Charlene Swankie, another real-life traveler, gives a striking performance as a dying woman with plans for one last trip to Alaska. She comes to terms with death while recounting to Fern the beauty she has seen during her travels, making for one of the most emotionally gripping scenes of the film.

The settings of Nomadland include the cafeteria of an Amazon warehouse, the kitchen of the infamous South Dakota tourist attraction Wall Drug, and a beet-harvesting plant in Nebraska. These gray-toned pillars of American industrialism are juxtaposed with the stunningly beautiful: a sunset over a desert in Quartzite, the geological wonders of Badlands National Park, and countless serene countryside roads.

Fern’s constant travel necessitates unconventional storytelling, as the scenery of Nomadland changes rapidly. However, this uprooted feeling is refreshing after a year when many of us have had to stay in place. The scenes can be slow, but this pace gives the audience time to take in the cinematography and focus on the characters’ emotions. Life on the road for many of the characters means freedom, and the film invites the viewer into their lives, allowing us to feel free too.

But this freedom does not have to be solitary —  the movie portrays the strong social connections forged between the attendees of the Rubber Tramp Rendezvous. Despite the physical distance that travel may put between individuals, they know their paths may converge again. Bob Wells, the real-life founder of the Rubber Tramp Rendezvous, who also plays himself in the film, repeats, “See you down the road,” when saying goodbye.

Nomadland is up for six Academy Awards this Sunday, including three history-making nominations for Chloé Zhao for Best Director, Best Film Editing, and Best Adapted Screenplay. Zhao is the first woman to be nominated for directing, editing, writing, and producing, and is the first woman of color to be nominated for Best Director. The film is also nominated in the category of Best Cinematography and received a nomination for Best Picture.