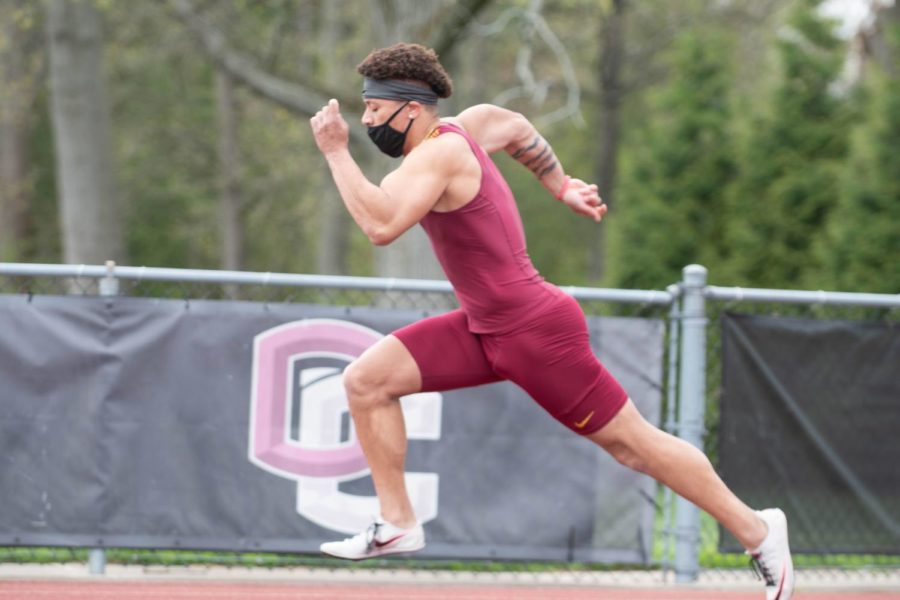 When College fourth-year and goalie on the women’s lacrosse team Maranda Phillips started her Oberlin athletic career, she had no idea it would end in stops, starts, and restarts. Despite all of the challenges that she and her teammates have faced — injuries, tough losses, triumphant wins, and one catastrophic pandemic — she is ready to finish strong with her team.

When the College announced mid-January that there would be no spring sport competitions, Phillips felt deflated and unprepared for her lacrosse career to end this way. With two years of eligibility remaining, she briefly considered continuing to play lacrosse next year at Villanova University, where she will go on to study law. Now Phillips is prepared to let it end here, the way she always pictured, as a fourth-year in an Oberlin uniform.

“All I wanted was to play,” she said. “I knew this was all the closure I needed to walk away from lacrosse.”

With law school ahead, Phillips is happy she came to Oberlin. She has explored and grown, and taken advantage of the incredible support system on the women’s lacrosse team.

“Lacrosse has kind of been my release from the chaos of life,” Phillips said. “Some people here find theirs in performing or in academics, but for me it was playing lacrosse, ending my days with practice and getting to compete.”

Like Phillips, College fourth-year men’s track and field sprinter Malachi Clemons was able to grow during his time at Oberlin and find the things he was passionate about. After graduation, Malachi plans to move to New York City to be a teacher. He will miss his team, but he feels comfortable and a bit relieved to be moving on. He will have fully played out a track and field career that began at age 5 racing against his older brother Jabari Clemons, OC ’18 — usually losing miserably.

When Malachi heard that he would get to compete this season, he knew he wasn’t in shape to perform at his best. But to him, track is all about the team. This is why he focused his energy this year on being a good training model for the first-years, having fun with his friends, and competing in relay races, which he prefers to individual events.

“It feels like there’s a lot more on the line when you’re fighting for your teammates,” Malachi said. “There’s a lot of responsibility that comes with it, and I like that kind of pressure. For me, it’s all about performing well for the person who gave me the baton and the person I’m handing it to next.”

“Where Malachi is, the engagement of the entire team goes up,” Wach said. “People are just drawn to him.”

During Malachi’s time on the track team, the sprints group began the tradition of facing him every time they do a particular warm-up squatting exercise. If he’s not at practice that day, the group faces his house, and in future years, Wach anticipates that the team will squat facing east toward New York City.

Malachi clearly has an impact on his teammates, but in his mind, it’s all about them. His favorite memory was winning the 4×400-meter relay with John Olson, OC ’19, and College fourth-years Adriano Atallah and Victor Salcido at the outdoor NCAC championships in 2019. He can remember every moment of that race, from the rain to the sound of Salcido vomiting on the side of the track to Olson handing the baton to Atallah in second place, to watching Atallah fight his way into the first-place spot during the second leg. He remembers his role battling to keep that spot during the third leg, finally handing the baton to his sick buddy Salcido, who fought all the way through the anchor lap to bring home the conference championship.

“It was a moment of triumph and growth, and it was just simply beautiful,” Malachi said. “What we did there was more important to me than any personal accolade.”

Wach also remembers the week before the race, when he and the sprints group sat together in a circle — something they did before every meet — with each person saying one thing they wanted to accomplish during the conference meet. Wach recalls Malachi’s goal before the conference championship was to win the 4×400 for Olson, who was a fourth-year at the time.

“My proudest moment as a coach so far has been seeing that goal actualize — a goal that at the time, by the way, seemed a bit far-fetched since we were seeded fifth, but they got it done,” Wach said. “It was incredible to watch.”

He and the other track coaches have been particularly impressed with the resilience that graduating students have shown this year, and the fact that they’ve already managed to jam some amazing performances into only three meets, with two to go.

The track team’s Senior Day is coming up this Saturday, April 24, against Earlham College. The ceremony will include an announcement of fourth-years’ academic accomplishments during their time at Oberlin, the groups and extracurriculars they’ve been part of, their track and field accomplishments, and what they will go on to do after they graduate.

Phillips and the women’s lacrosse team won their game against Wittenberg University this Wednesday, April 21. They have another game on Saturday, April 24, and their senior day is yet to be scheduled. While Phillips is disappointed that her parents won’t be able to come to senior day, she is relieved that the game and ceremony will be livestreamed on GoYeo.com, and is excited to make her final saves on Bailey Field wearing the Oberlin colors one last time.