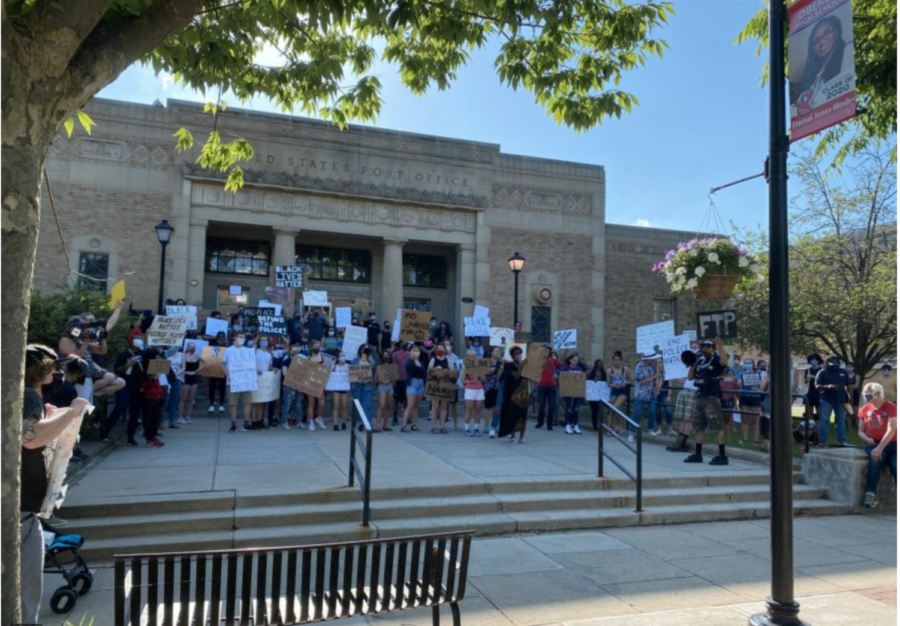 Students gathered downtown last June to protest the murder of George Floyd. Almost a year later, the officer that killed him has been convicted on three charges — second-degree unintentional murder, third-degree murder, and second-degree manslaughter.

At the end of a long Tuesday, with students gearing up for finals, news alerts pinged across Oberlin notifying the campus community that former Minneapolis police officer Derek Chauvin was convicted on all three charges — second-degree unintentional murder, third-degree murder, and second-degree manslaughter — for the killing of George Floyd. Many students who have been following the case closely felt a mix of strong emotions in response to the news.

“I think that my reaction — along with many Black people, not just on campus, but in general — was relief. But also just immediate frustration, once again, at the fact that we had to have that relief, that we all had to take this collective breath,” said College second-year and Student Senator Reginald Goudeau. “We’re all on the edge of our seats with this just hanging over our heads. Just this one case when there are so many other ones.”

For College first-year Vera Grace Menafee, following the trial these past three weeks only served as a reminder of problems that are too large and too deeply ingrained to be solved with a single verdict.

“The trial itself is a justification of police violence — a spectacle to clean up the mess rather than take responsibility and prevent state-sanctioned murder from happening in the first place,” Menafee wrote in an email to the Review. “Justice isn’t real in America. I think that was even more evident to me with this trial, even with the guilty verdict. Nothing can make up for taking someone’s life, taking them away from their family — or for the trauma we now carry from having to watch George Floyd being kneed into concrete and slowly lose his life. Nothing.”

Meredith Gadsby, professor of Africana Studies and Comparative American Studies and the co-chair of the Presidential Initiative on Racial Equity and Diversity, has seen the negative impact that the last few weeks have had on her students.

“Students are exhausted emotionally and physically,” Gadsby said. “In the conversations I’ve had, they range from feeling just completely exhausted to the point of just withdrawing from everything — classes, other people, Zoom — to being in a state of profound frustration and agitation.”

Goudeau hopes to see more support and leniency for students during this time.

“Ideally all students, but especially Black students right now, would be having time and ability to take time away from school, from the news, from life to sit down and just grieve properly, to process what’s going on,” Goudeau said. “Especially in the context of Senate — Senate being mostly Black this year — we really haven’t had the time to be able to process or grieve throughout most of this.”

Menafee expressed a similar sentiment, and described the challenges of navigating the first year of college during national unrest and constant violence.

“As a student, I’ve felt like I’ve forgotten what it means to be a person,” Menafee wrote. “How can I live when people who look like me are consistently being killed, when a beautiful girl three years younger than me was shot and killed by the police a few days ago? I want everything to stop. I want us to all stop and look at what is happening and sit in it, the way I live with it every day.”

The news of Chauvin’s conviction comes during a time of continued police brutality. Since testimony in the trial began on March 29, at least 64 people have been killed by law enforcement in the U.S., with more than half of the victims being Black or Latinx. On the day that prosecutors opened their case against Chauvin, a Chicago officer chased down 13-year-old Adam Toledo, and shot and killed him. Ten days ago Daunte Wright, a 20-year-old in Minnesota, was killed during a traffic stop. Twenty minutes before the verdict in Chauvin’s trial was announced, 16-year-old Ma’Khia Bryant was killed by police in Columbus, OH.

For Gadsby, watching students come together in response to these tragedies provided a glimmer of hope during a tumultuous time.

“On Saturday, a group of students organized a vigil for Daunte Wright, who was killed over a week ago — also in Minnesota,” Gadsby said. “It was a vigil and it was also a celebration of community and Black love that really, I think, lifted the spirits of everybody who attended. And also it was like a love letter to all these people who died in ways that reflect the kind of absence of love. I think that moment of coming together and organizing that event was a place of — I wouldn’t say joy — but was a place of affirmation and community and love that was really important.”

College first-year and Senate Operations Manager Chudi Martin Jr. says that the Presidential Initiative is an important step to long-term change and appreciates Africana studies professors and the A-House community for providing immediate support to students this week. Additionally, he hopes that the College will support the demands that Oberlin’s Black Student Union, ABUSUA, issued last summer.

“I think [there should be] more serious consideration of the demands…” Martin said. “Students have said what they needed already. And if you want to … fulfill those needs, I think that’s a very feasible thing to do instead of trying to find some other solution when students have very clearly voiced that this is something that would directly benefit our lives.”

Menafee hopes to see a concentrated effort on the part of not just the College, but Obies themselves.

“I want Oberlin students to wake up, and begin to grieve with me,” Menafee wrote. “I’m tired of feeling like I’m carrying this weight alone and I want to talk about how I’m feeling with my peers without having to feel like I’m an emotional burden. And I also don’t want to feel like I only matter when I’m in pain. I know it’s a delicate balance, and so I’m also asking for grace and generosity and compassion as we all learn how to be here for one another because people are gifts. Ma’Khia was a gift. Adam was a gift. George was a gift. Breonna was a gift. Daunte was a gift. Life is precious and it’s time for us to start acting like it.”