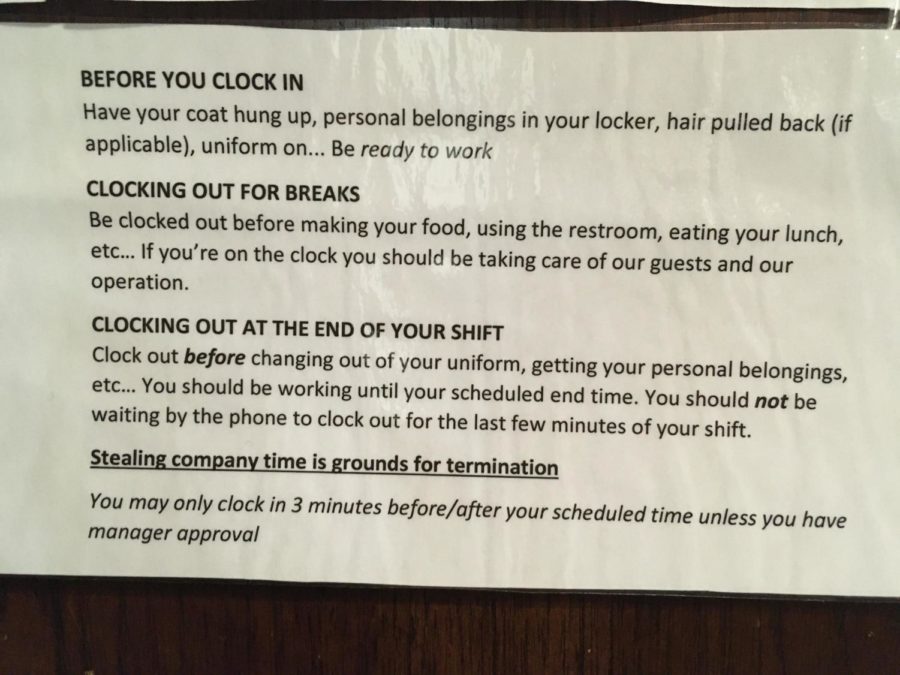 Signs like this have been posted in AVI workspaces, warning dining workers against time theft.

A few weeks ago, I noticed that a laminated note had been stuck to the wall by the phones that AVI Foodsystems’ employees use to clock in and out. There was a note by each and every phone across campus. The note was about time theft. I have been a student worker within Campus Dining Services all four years I’ve been at Oberlin; seeing a note like this was new to me.

The note reminds workers to make sure to not do anything that does not involve serving the customers and the operation. Examples of such things would be changing in or out of uniform, putting on a hairnet, or using the restroom while “on the clock.” The note emphasizes that “if you’re on the clock you should be taking care of our guests and our operation.” The note also includes a threat: “Stealing company time is grounds for termination.” Yes, you read that right. Using the restroom without clocking out for those two minutes could get you fired from AVI.

Before I go on, let’s get one thing straight: capitalism is, by definition, wage theft. That’s why it’s so ironic that individual workers are told to make sure they don’t “steal company time.” Nasty notes get plastered on walls to remind workers that if they take a minute’s rest, they risk termination. These notes deny the humanity of workers who are expected to not just give every hour, but every minute, every second to the efficiency of production. If they don’t, they are engaging in the crime of time theft.

I think it is important to question and critique the idea of time theft on multiple levels. Wage theft is not something often held up as the crisis that it is. On a national level, wage theft on the part of employers is estimated to total $15 billion in the U.S. each year. In Ohio specifically, “an estimated 217,000 workers face wage theft each year through minimum wage violations alone,” according to Policy Matters Ohio.

Anecdotally, I have seen and heard about instances of wage theft within CDS at Oberlin College. I constantly see workers too busy to take their full breaks, and I have heard of several student workers not getting their paychecks in the beginning of the 2020 academic year. AVI also requires employees, including student workers, to go through online training. The trainings are about important topics such as food safety and sexual harassment, but they are to be watched on employees’ free time. To be clear, workers have to spend hours of their free time doing mandatory training while simultaneously being told to make sure to not use the restroom during paid time at work.

It is tragically humorous that, within the power dynamic that exists between a company and its workers, individuals can be blamed for stealing time while companies get away with multiple forms of stealing. Think about the lost wages that accumulate each time a worker is denied their full break because the dining hall is too busy. Even small tasks, such as having to take out the trash after you’ve clocked out, arguably qualify as theft by the company. And sure, taking out the trash just takes a couple of minutes. But, putting my hair in a ponytail and securing it with a hairnet takes me around 10 seconds, but according to AVI’s logic of time theft, I am stealing from the company if I am clocked in while doing so.

It is clear to me that, if time can be stolen, then time is constantly being stolen from workers, but there are also other forms of stealing that should be acknowledged. The conditions in some Oberlin facilities create precarious conditions that endanger the health and life of employees. For example, the floors in Stevenson have long been a danger to workers. Let’s expand the conversation about accusations of time theft to really conceptualize who is being harmed. Here’s a hint: It’s not the company. I also have to add that “the company” really just means those who are at the top of the hierarchy and earn the most — those who can use the restroom without clocking out.

I got upset and infuriated when I saw those disgusting time theft notes posted next to each and every phone. Employees in dining services work harder than anyone I know. Long hours on their feet, serving students to the very last minute of their shifts, and finding the energy to cheer each other on as they do so. When I came to Oberlin as a nervous first-year, Dascomb Dining Hall employees became my family on campus. Every year, getting to know dining service employees at Oberlin has brought joy and laughter to my life. I do not want them to be told that if they take one second to breathe, use the restroom while they are clocked in, or be human — they could be fired for stealing.

AVI management should take down their time theft notes. Management might think that they are merely reminding workers to do their very best and ultimately creating a more effective operation that brings better, quicker service to students. Efficiency is one out of many words co-opted by capitalism. I would like to point out to AVI management that time theft notes are not having the desired effect — unless the desired effect is indignation, guilt, and dehumanization. It would be better to foster an environment built on the trust and respect of employees. That would be a good start, at least.