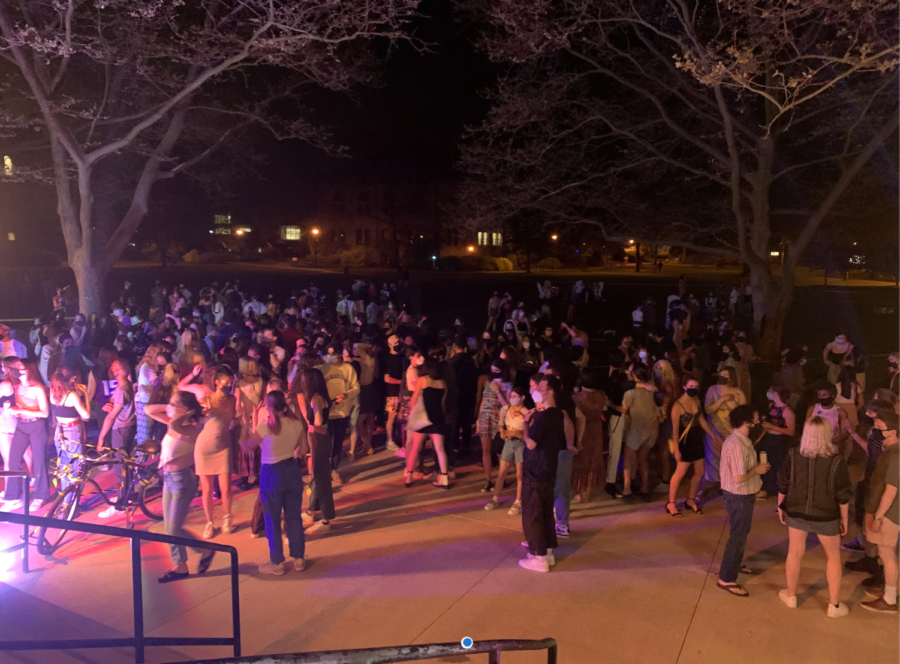 On Tuesday night, students gathered in Wilder Bowl to dance away the end-of-semester blues.

Graduating students had one last chance yesterday to engage in a beloved Oberlin tradition: swaying in a circle of friends and making eyes at someone who they matched with on Tinder four years ago. Splitchers may be dead, but the outdoor “Sprinklerz” has risen to take its place.

Pre-COVID, any Obie could tell you that Wednesdays were the most happening night on campus. The path from The Feve’s Long Island Night to Splitchers at the ’Sco was well-traveled by many a stumbling student.

“On Wednesdays, just not seeing anyone coming out of Wilder [Hall] — and the cloud of cigarette smoke outside the ramp — I miss that,” said College fourth-year Shivani Singh, a Sprinklerz organizer.

Singh and her co-organizers sensed that there was student demand for one last hurrah.

“My whole house had outfits planned for Splitchers,” Singh said. “So we were like, how can we make this happen for seniors? A lot of people talk about missing it.”

College fourth-year Isabel Tadmiri has been feeling the loss of social spaces this year and was excited to make her DJing debut at last night’s Sprinklerz.

“Oberlin used to have a lot of dancing and music as its social life centers,” Tadmiri wrote in a message to the Review. “Space for vibes or dance parties with friends became so important to my mental health here. … I’m excited to have a chance to blast music and dance it out!”

DJing for Splitchers is no small feat, and some of the ’Sco’s most iconic Wednesday nights have gone down in Oberlin history. Highlights include Pop Punk Splitchers, Fleetwood Mac Splitchers, Motown Splitchers, and the infamous BP Oil Spill Splitchers.

To give more people a DJing opportunity, yesterday’s party was split into 30-minute sets, all hosted by graduating students. Splitchers has long been open to seasoned and amateur DJs alike, and Sprinklerz was no different. The event featured folks who were eager to show off their song-mixing prowess and those who had agonized over curating the perfect playlist for their AUX-cord takeover.

“I don’t actually know how to DJ — I’m just gonna play songs from my phone,” Singh said. “I’m really excited about ‘High Horse’ by Kacey Musgraves. I’ve just always wanted to do this, I just love playing music for people.”

Tadmiri said that they were most excited to play “Mr. Saxobeat” during their set, which they did to a thunderous reception.

Yesterday night, College fourth-year Daniel Fleischer said that he was overjoyed to have one last opportunity to dance with his friends.

“I’m so glad that I got one party in my senior year,” Fleischer said. “I’m so sad that it’s only one, but I’m so glad that I’m here right now — it’s feeding my soul in a way I didn’t know that I needed.”