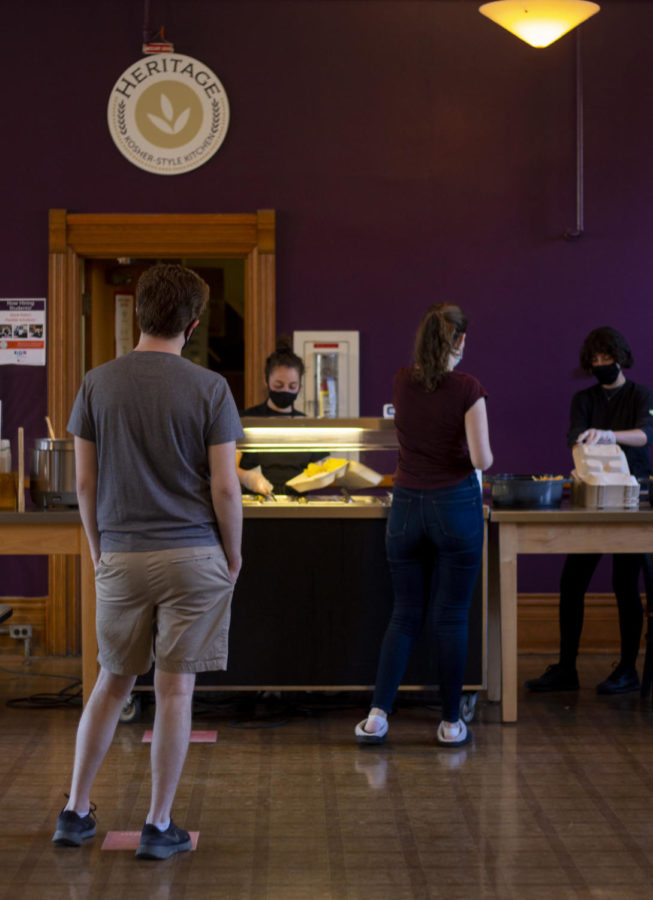 Heritage Kitchen in Talcott Hall will become a certified kosher facility this May.

Chabad at Oberlin and AVI Fresh are finalizing plans to have Heritage Kitchen become a certified kosher dining hall this May, according to an announcement last week. Previously, Heritage offered “kosher style” options, which followed most Jewish dietary laws but were still not technically kosher. Rabbi Shlomo Elkan, co-director of Chabad at Oberlin, will serve as the dining hall’s new kosher administrator. The partnership will ensure that Heritage’s operations meet religious standards.

“Both Chabad [and Oberlin Hillel] have been instrumental in moving forward with a kosher certified kitchen on campus,” wrote Lilkeisha Smith, AVI’s director of operations at Oberlin, in an email to the Review. “Our hope is to provide a space where not only those that practice keeping kosher can have a space where they can dine and commune, but others can share in a dining experience that they may not have had.”

To be certified kosher, a kitchen must be monitored by a trained religious supervisor or mashgiach. Until now, this was not present at Heritage. Elkan will work with the mashgichim to facilitate food preparation that fully adheres to Jewish dietary laws moving forward.

“My role will be coordinating all kosher operations at the kitchen, which means liaising between AVI and the mashgichim,” Elkan wrote in an email to the Review. “Also Chabad will be responsible for kashering the kitchen and ensuring it maintains its kosher status, fielding kosher questions, and kosher education.”

For those who keep kosher and had no on-campus dining choices this academic year, Heritage will now be a viable dining option. College third-year Noah Plotkin, who keeps Kosher and is active in the Chabad student organization, is happy to see a commitment made to the Jewish community at Oberlin by meeting the necessary dietary needs.

“The kosher dining option makes Oberlin one of the few liberal arts schools accessible to all members of the religious Jewish community,” Plotkin wrote in a message to the Review. “There is a lot of diversity of thought and students that could come through this program.”

Still, the announcement has been met with mixed reactions from some students and alumni. The persistence of Heritage comes in the wake of the closure of Kosher-Halal Co-op, a student-run collective that existed for over four decades.

KHC, which served meals in accordance with Jewish and Muslim dietary laws, formerly operated out of the Talcott Hall kitchen. All campus co-ops were closed this year due to COVID-19, and Heritage opened in place of KHC in Talcott. While many co-ops will re-open in the fall, KHC is permanently closed. Many students and alumni objected to the change, voicing concerns about the loss of a distinctive interfaith community. Former KHC member Jasper Perry-Anderson, OC ’20, believes that hands-on co-op work is a valuable experience that can’t be replicated by a typical dining setup.

“I think cooking, keeping a kitchen clean, and following religious dietary restrictions if we so choose are important life skills that it’s genuinely important to learn,” Perry-Anderson said. “People can learn that from being in co-ops far more than we can by going to dining halls.”

“KHC and Campus Dining Services are two totally different things,” Reinstein said. “If students are going to a kosher dining hall, I’m very glad to know it’s getting certified. … [But KHC offered] social connections and helped us grow as independent Jewish and Muslim adults. We were creating something of our own.”

While a traditional dining hall can’t offer the same experience as a co-op, Heritage’s kosher certification is a positive step for individuals observing these dietary practices. Elkan and Smith both hope that this change will promote discussions around identity and help people grow closer through communal meals.

“There is a shared history, collective memory, and connection to spiritual identity that has bound the Jewish people for thousands of years,” Elkan wrote. “The Heritage Kosher Kitchen honors the fact that there has been a kosher community at Oberlin for decades in KHC. The co-op paved the way for the newest evolution in kosher at Oberlin and … I feel honored to be a link in the chain in Oberlin’s Jewish food history.”