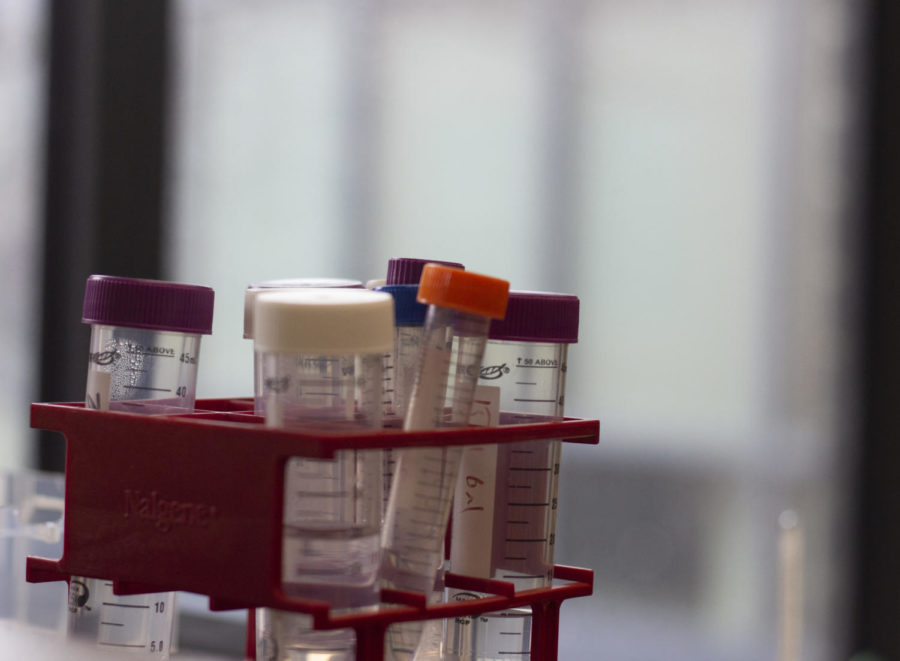 Professors from Geology, Psychology, and Computer Science participated in Departmental Action and Reflection Teams this year to promote inclusive excellence in STEM.

Over the past year, the Geology, Computer Science, and Psychology departments have all engaged in Departmental Action and Reflection Teams, aimed at strengthening inclusivity in Oberlin’s STEM departments. The program comes at a time when Obies of color have shared experiences of discrimination in various STEM departments.

DART is a product of Oberlin’s Howard Hughes Medical Institute Inclusive Excellence grant awarded in 2017. Next year, the Neuroscience, Biology, Chemistry, and Mathematics departments will participate. The initiative kicked off last summer with a five-day workshop led by the Science Museum of Minnesota’s IDEAL Center.

“There were around 25 faculty who all came together to essentially learn how to have better conversations,” HHMI STEM fellow Marcus Hill, OC ’19, said. “They were given very structured and meaningful ways of interacting with each other and tools to break down the hierarchy of power that exists between students and faculty, and also between the faculty.”

Hill says that he has noticed a shift in the way that people communicate with one another after the workshop.

“I was the Geology student representative while I was a student, so I got to see a little bit what faculty conversations look like,” Hill said. “For me, being a part of these conversations before the workshop and now seeing it after — it has truly made the atmosphere between people much more welcoming.”

Associate Professor and Chair of Geology Zeb Page says that he has utilized these dialogue strategies to make his classroom discussions more equitable.

“I would say that [the workshop] was the single most transformational training that I’ve ever experienced,” Page said. “It completely turned on my head many notions of what can happen in a science classroom and providing tools to make space for talking about societal issues and for acknowledging important issues of race, gender, and class in science and how it’s affected and steered silence.”

The Geology department has also re-envisioned the role of its student representatives and their elections process.

“We worked together with the students to develop a new [Geology] representative system with secret ballots, and we’re compensating the students for their work,” Page said. “We have a dedicated elected student position to focus on diversity, equity and inclusion.”

Through the DART process, the Geology department has also examined its faculty hiring process and made changes to promote equity.

“We did make a lot of changes in how we are thinking about hiring, how we are prioritizing diversity work and diversity statements, … and really focusing on equitable decision-making as opposed to just sort of gut feelings,” Page said.

Professor of Psychology and Environmental Studies Cindy Frantz explained that the Psychology department had been working on issues of DEI before the DART program started, particularly with regard to redesigning the Introduction to Psychological Science class.

“We used to teach it to around a hundred people,” Frantz said. “We got data from the Office of Institutional Research and determined that white kids were doing better in that class than students of color or students from other underrepresented groups. That’s really consistent with the research that lecturing, multiple choice quizzes, and tests are not the best way to teach.”

In fall 2019, the department overhauled the structure of the introductory course.

“We devote more staff time to it now,” Frantz said. “Instead of having just one big class, we’ll have two or three sections of only 40 people, and we’ve made it much more interactive. We’re purposefully incorporating evidence-based teaching practices that we know are effective for increasing student learning.”

Frantz mentioned that the department is examining how it evaluates faculty members who are coming up for tenure, and ways to democratize how students get opportunities to participate in research labs, among many other changes.

One of the biggest changes is a new emphasis on cultivating belonging in the department.

“When we would talk about [our] goals as a department … it was very much focused on teaching the subject matter, as opposed to treating our students as whole human beings and thinking about their developmental needs,” Frantz said. “I think we all recognize the importance of creating a feeling of belonging in the classroom and among students, because that is one of the best predictors of whether or not anybody stays anywhere.”

While Frantz is on sabbatical this year, she is looking forward to bringing a new approach to her courses in the summer.

“It’s funny because I’m a social psychologist, and I know all about the need to belong, and yet somehow never really fully embedded that in my teaching,” Frantz said. “I feel like my whole approach to teaching is changing, and that’s really exciting to me. I think it’s going to make a difference for students.”

The Computer Science department kicked off its participation in DART last summer with a reading group for students and faculty to discuss studies about inclusivity.

“We were specifically looking at papers that were published in venues about computer science education that addressed diversity and how to retain students,” said Assistant Professor of Computer Science Cynthia Taylor, OC ’02. “We read a bunch of papers about pair programming, which is where you have two students work together on a programming assignment — that’s supposed to be beneficial for all students, but especially retain more women and more students of color.”

Taylor says that this summer the DART team will begin revising the assignments for both the Introduction to Computer Science and the Data Structures classes by using evidence-based research that looks at how to retain women and students of color.

“We’re going to be looking at revising our lab assignments to try to make them more realistic — more real-world applications,” Taylor said. “And then also give students a chance to be more creative because all of the research shows that that’s something that is important to students who are underrepresented in computer science.”

The Computer Science department has also created a Code of Conduct, which is introduced at the beginning of all classes to encourage more equitable discussion participation.

The DART groups have weekly meetings within each department where faculty can process the changes they are implementing in their classes. In the weekly meetings, the Computer Science department has discussed College fourth-year Ritesh Isuri’s op-ed about exclusion in STEM, as well as an anonymized report of concerns that students shared during a listening session.

“It’s been in some ways really shocking to see that students feel this way,” Taylor said. “I think it’s really caused us to try to think about what we could do differently to make students feel more comfortable in computer science, and more included.”

The DART process includes an HHMI student leadership committee of six students. College first-year Clea Thomas joined the team this semester as part of a subcommittee examining student experiences in STEM. They conducted interviews with students and hosted a listening session.

According to Thomas, students spoke about imposter syndrome and not feeling included in Oberlin’s predominantly white STEM departments. Thomas noted that students would like to see more of an effort from professors in pronouncing and spelling names, greater acknowledgment of students’ varied backgrounds, and more diversity among faculty. Student critiques included a lack of checks and balances for tenured professors and professors who didn’t meet students’ disability accommodations.

“I feel like I’ve noticed a really tangible difference, at least with Geology,” Thomas said. “I feel like, last semester and this semester, the environment was just so welcoming. I think that the professors were actually thinking about accessibility and how to make the students more comfortable in the classroom.”

For Page, the DART process has been a critical opportunity to envision much-needed change.

“We have pretended that science exists kind of in a vacuum away from society, but of course, scientists all live in society and there’s ample evidence of long-term racist and sexist behaviors that we see throughout society — and science is clearly not immune to that,” he said.

“Sometimes even when you think you’re doing a pretty good job, in the end you recognize that you’re not doing as well as you could,” he said. “Having the opportunity to spend time reflecting with my colleagues about that, to ask ourselves hard questions with the help of students, … has been really eye-opening and feels really transformative.”