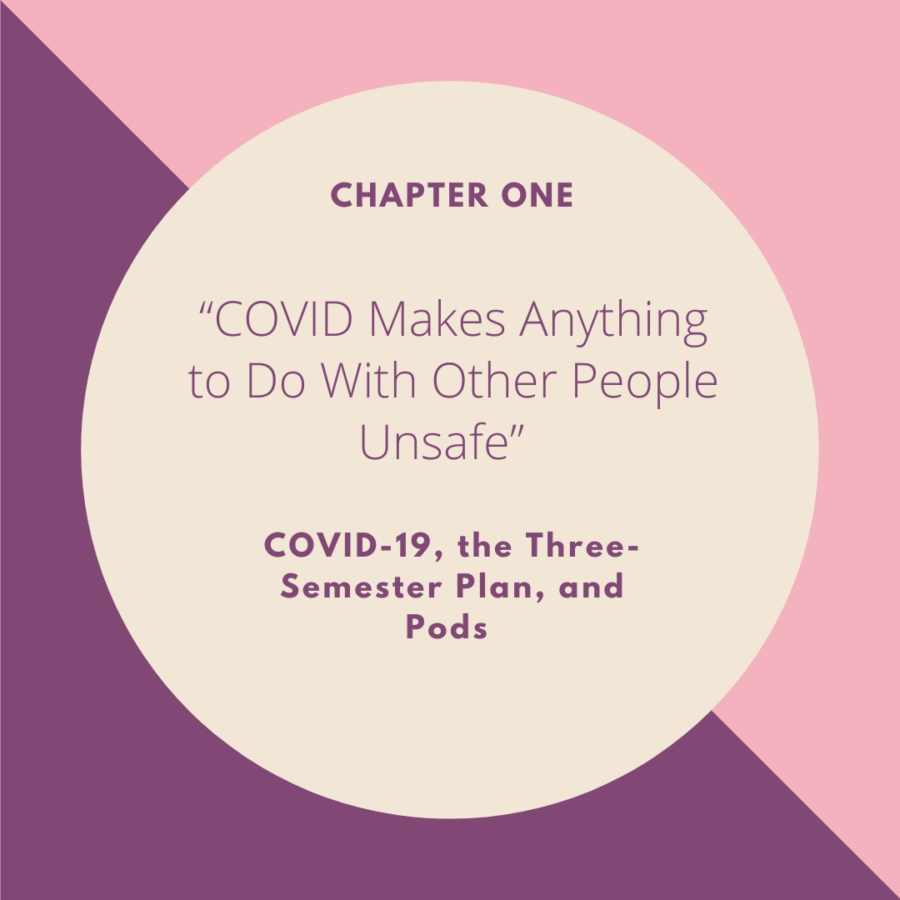 The three-semester plan has heightened the nuances in class year social dynamics. Oberlin students are, on a whole, very aware of the role that positionality plays in their hookups — at least when it comes to obvious and superficial things like job title and year.

This created an interesting paradox for older students, especially during the first semester. Many seniors reported that they felt uncomfortable approaching second-year students because of the inherent power difference afforded by their age, and because the second-years had less time on campus than in a non-pandemic year.

Eddie McPop summarized this experience by saying, “I’m a senior so I find it strange to have sex with underclassmen. Juniors not being on campus definitely shrunk the Tinder pool.”

Another senior, Em, who also identifies as queer, elaborated that on top of not really being interested in younger students, they were “not that interested in handling logistics.”

In a non-pandemic year, the logistics of hooking up was limited to ‘your place or mine,’ and if you would stay in touch after the end of the semester or graduation. But with COVID-19, the details of coordinating a hookup become less about the personal details between the people directly involved, and more about the groups with which each person socializes and their level of COVID-19 safety.

Anastasia, a bisexual second-year, commented that, “I believe being a sophomore … being on campus and then leaving and then coming back definitely affected my experience. I didn’t want to start anything with anyone because we would just end up leaving for six months and that would open it up to like the need for a whole long-distance conversation, etc.”

Anastasia describes a feeling of limbo where they were not able to fully immerse themself in the Oberlin community because they knew they would be leaving for a long period of time.

Second-year students described a feeling akin to going to summer camp. There for a few weeks, and then waiting a year to return and in the meantime hoping that your crush would still be available and interested when you’re finally back together.

In the fall, off-campus third-year students had only as much autonomy as was allowed to them by whatever pandemic-safety structure their family and friends were operating under. And then there is the ultimate challenge posed by this plan and the pandemic itself: the possibility that each partner will be on campus for different semesters. Emily, a third-year, says, “I was able to safely visit my partner during the fall semester because I was living at home, but I will have to be at Oberlin this summer when my partner will not be in school. So, our schedules won’t really line up which is difficult.”

Furthermore, students who had taken a semester off for any reason, including studying away without College approval, were counted with the cohort below them, loosening the sense of community within each class — creating complex social dynamics of a whole different sort.

Many students living together off campus or in Village Housing decided to form house groups or pods, exposing themselves to just their housemates or their housemates and one other house group, to lessen the feelings of isolation from campus life that seniors are prone to feel in a normal year. Exposure to housemates is also a practical matter as it makes living situations more comfortable — especially for apartments and houses with only one bathroom. Being unmasked within six feet of other people, however, means shouldering their risk and making all additional exposure decisions together.

While there is no question that living with others during this extended quarantine is favorable to living alone, the social dynamics are not so easily managed. Outside of safety, students have to choose between fulfilling their desires and sexual projects and allowing their housemates to do so. And because housemates in many cases were selected before the pandemic really began, the criteria for a good living situation may have looked very different than it does now, particularly regarding the relationship statuses of different housemates.

Hoobnoob, a pansexual/queer senior, wrote that, “I am committed to COVID safety for my housemate’s partner and their housemate’s sake, instead of just my own and my housemate’s. Being that I don’t have a partner of my own, that gets frustrating at times.” While they did not comment on if they would have altered their living arrangements based on the feasibility of being able to also have an intimate partner, or not, this response does beg the question.

Podding is not only a matter of convenience for students living with other people during this time. For those living alone, podding is also a way to maintain intimacy within friends and romantic relationships while mitigating the risks of exposure to COVID-19. Despite College policy prohibiting podding, 44 percent of my total respondents stated that they were in a pod, and 77 percent of entirely filled surveys mentioned pods. Those surveys that did not mention pods were responses from students who have not been on campus this year.

For some students, like Em, their living situation made their pod for them. Because they live with roommates, they had less of a chance to build hooking up into that mix. Em also doesn’t “really engage with hookup culture now because I have a long distance partner and even though we are open I don’t want to risk expanding our pod.” Their reason was not necessarily lack of interest but because “I care a lot more about my roommates meeting people so am willing to not date this year.” While Em is electing not to expand their pod by bringing in an intimate partner, the logistics of keeping their pod hidden from the College’s purview becomes much easier because they all live together.

The opposite is true for students living in the dorms. They aren’t coming as packaged deals in the form of houses. Therefore, they have more say in who they all individually pod with — even within a friend group. However, they have to be more careful of getting caught because of the expanded role of Residential Assistants in reporting unmasked people.

Dill Doe, a second-year who identifies as lesbian-ish, wrote that, “My girlfriend and I were a pod (we didn’t keep distance from each other) but it was still more difficult because we often had to be worried about snitches seeing one of us with the other one in the same room, or sitting together outside.” Dill Doe explains that the vigilance that they needed to keep while spending time with their girlfriend put stress on their relationship.

Outside of relationships like Em and Dill Doe’s that both have set boundaries, students who wanted to engage in casual hookups and relationships with wider boundaries were faced with a decision between podding with friends, remaining unattached in order to safely hook up, or the risky and rarely recommended combination of sleeping with your friends.

Claire Foster chose the third option and commented that, “We called ourselves ‘casual,’ which in theory meant that we could see other people, [but] we didn’t see other people. It was something that we didn’t really confront very well. I [didn’t] want to be exclusive because that blurred the lines between dating and hooking up. However, we also made clear to each other that we should keep closed pods of people to avoid [COVID-19] risk. It was an awkward and unsaid balance.” In normal times, the boundary between dating and hooking up can be the amount of time spent together and exclusivity. However, the usual tactics students employ to distance themselves emotionally from their hookups are less viable during COVID-19.

Maintaining this balance was exactly what Anastasia was worried about upsetting in their pod. Anastasia wrote that they had been avoiding the possibility of a hookup last semester because, “I want to be safe and I can’t risk getting COVID so I have been avoiding exposure. Maybe on a subconscious level I am also scared of actually engaging in a hookup with someone. … Also I don’t want to mess with the beauty of my platonic friendships so I would never hook up with any of my friends in my pod.” Students in pods have limited choice in who they hook up with, and if they wish to not disrupt the dynamics of their friend group, they may choose to not engage at all.

The concept of students having to choose between intimacy with their friends and intimacy with new people is unprecedented in this way. I don’t mean to equate types of physical intimacy, but in a way, being maskless with anyone is a testament to the intimacy of the relationship because it is an act of intense vulnerability — whether that vulnerability leads to sex or not. Oberlin’s hookup culture has been greatly affected by the adoption of a pod system because students have lost the ability to have privacy and distance between their friends and their intimate partners.

April, a bisexual senior, lamented, “part of me also misses the under-the-radar part of hooking up with someone. I don’t like for people to know my hookup business, so I also liked before that I could be more secretive about who I was seeing.”

Oberlin is a very tight-knit community, but one of the drawbacks of this is the lack of privacy for students to explore their own feelings before their relationships become public domain for conversation.

“Oberlin hookup culture is pretty casual and there are a lot of things unspoken in a casual intimate interaction,” April elaborated. “Sometimes we joke that everyone at Oberlin who participates in hookup culture is connected to everyone else based on who has kissed [whom], with only a few degrees of separation.”

Charles Weasley, a straight senior, summarized the plight of singles on campus this year by saying that, “now, [dating around] is frowned upon and all the single people just have to be lonely or be condemned. It’s frustrating because COVID took its toll on a lot of relationships, so a lot of people needed a fresh start. There was no guarantee as to who was being safe though, so sexuality and sexploits were less discussed or, if they were, there was more room for criticism than there ever was pre-COVID.”

The frustration Charles Weasley expresses is not just about the disruption of the social norm of single people being able to freely pursue their options, but also that their personal lives are viable topics of conversation for people they do not know well.

Fellow senior G, who identifies as bi-curious, wrote that, “[COVID-19] makes anything to do with other people unsafe. My boyfriend and I went the first three weeks of our relationship without getting within six feet of one another, until we got negative test results back and knew it was okay to begin a bubble. I wouldn’t have any confidence in a hookup.” G reinforces that trusting your partner not only within the sexual dynamic but with the choices they make regarding COVID safety has become a deterrent to casual hookups.

The fear that your hookup would not be honest with you is restated by Catparent, a pan and demi-sexual senior who wrote, “hookup culture at Oberlin honestly just became more deceptive than before because people didn’t want to give up sexual validation despite the personal health risks and the risks to the rest of the community.”