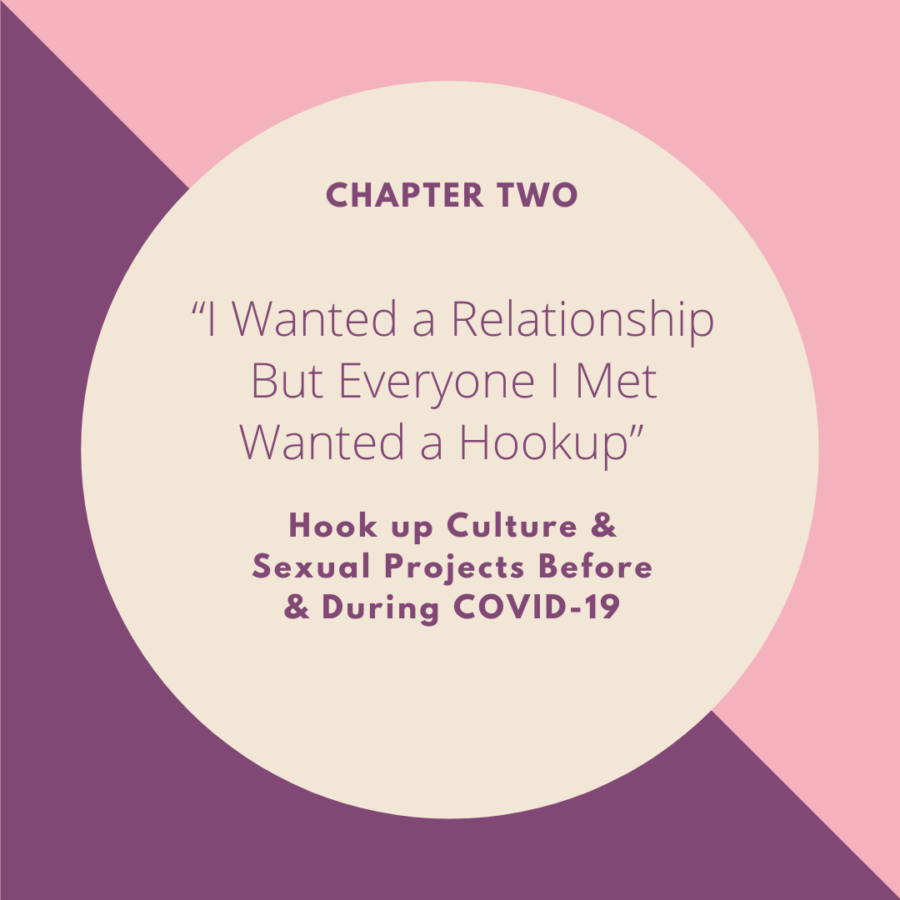 CHAPTER 2: Hook up Culture & Sexual Projects Before & During COVID-19

Anastasia outlined that “most students prefer to hook up or be friends with benefits. Finding an actual relationship is difficult; you’ll more likely end up hooking up with all of your friends and your friends’ friends. Everyone is super nice and cool and you’ll probably like people but everyone just wants to hook up. I think we’re all too emotionally stunted for real relationships.”

The ethos of the campus, as Greta, a bisexual senior, puts it, is that “Monogamous dating is kind of looked down upon and to be cool you should have casual hookups with lots of people who you then avoid eye contact with forever, after your period of hooking up ends. It’s kind of like a distortion or extreme version of free love and sexual liberation where instead of having the freedom to do what you want and choose to hook up or not, it’s like if you aren’t constantly hooking up, then you aren’t really free because you must be repressed if you don’t want to be sharing your body and sexuality with everyone.”

Anne Martin, a senior who defines their sexuality as fluid, remarks that “the myth that hooking up is a central part of college for everyone is still really pervasive.” The topic of sex is so casually and frequently floated that it can be both easy to forget that not everyone is having sex — however they choose to define it — and that those who are not having sex can feel a sense of shame about their own choices to abstain.

Even if it is a myth that everyone is hooking up with semi-attached partners or one-night stands, that expectation is still the dominant culture with which all have to contend. And, so, in order to appear “cool” or fit the mold — especially for younger students — casual hookups are the norm. However, our publicly-agreed-upon norm doesn’t necessarily align with the individual goals and values of many on campus.

Sally, a fourth-year questioning their sexuality, said that at Oberlin, “I don’t think you can just assume you are dating someone just because you are ‘exclusive.’ Even if it may seem like you basically are dating.”

This conversation is a type of definition of relationship, but it does not establish a romantic relationship. Exclusivity pertains more to sexual health, and now COVID-19 safety, than it does to romantic feelings. It determines only that you will not be sexually intimate with another person, but there is an implication that if one person finds someone else they would rather be with, then the exclusive situation will be over without the complication of a breakup from a serious relationship.

Alice, a queer second-year, added that “I think you don’t know something like that until there has been a talk or an established label. To me, dating someone exclusively or becoming someone’s girlfriend/boyfriend has to be prompted by an ‘official’ conversation. Expectations have to be the same on both sides, and they have to be understood.” The matching up of intentions and expectations between partners desiring a relationship is the only way that students agree that they know for certain that they are in a relationship.

In their book Sexual Citizens: A Landmark Study of Sex, Power, and Assault on Campus, Jennifer S. Hirsch and Shamus Khan introduce the concept of sexual projects as “the reasons why anyone might seek a particular sexual interaction or experience” (2020).

Sexual projects vary person to person and can be divided into long-term and short-term projects. Short-term goals are the ones accomplished in a night, and are more easily clarified for one’s self and expressed to others. Some shorter term goals might look like wanting to have sex, having a threeway, kissing your crush, or trying a new position. Long-term goals are more complicated because they also intersect with life goals. There is an assumption that sexual projects would differ by gender identity — however, the data I collected stratified projects more by experience level, how sexually active students are, and how many partners students desire. This may also be because I identify as a cis woman and respondents were aware of my identity when they answered the survey.

These projects are rarely as clearly articulated to students’ potential partners. This is due in part to social pressures to conform to Oberlin’s sexual culture, which can prevent students from admitting sexual projects to themselves that deviate from this norm.

Senior Maggie commented that, for her, “the most frustrating element of Oberlin’s hookup culture pre-COVID was a lack of directness with other students regarding dating/hookups. Many of my former romantic interests did not communicate what they wanted out of the hookup/relationship, making it easy for them to ghost me/suddenly lose interest without any negative impact on their part.”

It can feel easier to convince yourself that you do not owe your casual fling the energy and attention that you would give a romantic partner if there is less communication overall. On the other hand, communication between potential partners has also increased. Some students, like Jane Doe, a straight fifth-year, “think people are much more likely to actually communicate during hookups now [in COVID] than before. Plus, it’s less likely that people are just hooking up for the sake of hooking up.” Many students have either had enough fear of COVID-19 exposure to ask more questions of potential partners — or their pod mates place pressure on them to find out more details before they collectively approve the hookup. This is almost entirely due to the health concerns presented by COVID-19.

Charles Weasley commented that “after COVID, everyone asked for both negative COVID and STI tests, and to be involved in hookup culture was more frowned upon than celebrated. Overlap was scary because of possible COVID exposure.” Overlap here refers to students hooking up with multiple people from different pods concurrently. They also added that they and their hookup “explicitly discussed exclusivity because of consideration for COVID safety.”

Exclusivity discussions before COVID-19 were more likely to occur after a month of consistently hooking up — if at all. For other students whose projects were to explore their sexualities or to meet new people, COVID-19 has limited them in accomplishing their sexual projects with other people physically — though digital methods of fulfilment have not been hindered by the pandemic.

Hoobnoob writes about their frustration with the blocks towards fulfilling their sexual project of entering a monogamous and committed relationship: “Now, the most frustrating element is finding someone I like enough to be sexually monogamous with. It takes a while for me to get to know someone intimately. When I was having sex with several different people each month, I could explore these relationships simultaneously. Now, I’m only having sex with one person at a time, and the process goes more slowly. I am currently very dissatisfied with my sexual and romantic status quo.”

There are many ways to be connected to others at Oberlin that don’t take on the traditional form of monogamous and long-term relationships. “Before coming to Oberlin, I’d viewed hookups as being more of a temporary situation — you either hookup until you start dating, or you call it quits when you realize it isn’t going anywhere,” says Ms. Crouton, a gay man and senior. “However, being on a more sex-positive campus, my perspective quickly changed, as I think a hookup can certainly be a long-term thing and can be a very intentional choice for what a relationship looks like.”

Long-term projects become even more difficult to communicate when they go against the cultural norm. At Oberlin monogamous and long-term relationships are looked down upon as being “normie,” or repressed — especially among cisgender heterosexual people. However, the pushback against monogamy at Oberlin does not diminish many students’ desire for it.

A common theme in the survey, especially among female-identified participants, was to assume that if they communicated their long-term projects more directly and/or earlier on in their situationship, then they would be more fulfilled. Women are expected societally to desire more committed relationships than their male counterparts, and so they may feel more pressure to deny that sexual project for themselves or not communicate that desire to others, so that they are not perceived as not being “cool,” as Lamont et. al described in “Navigating Campus Hookup Culture: LGBTQ Students and College Hookups.” But what’s “cool” also differs by friend group and along the College/Conservatory divide. Ethical non-monogamy has also been a prominent feature of the Oberlin dating scene, especially in the College. However because of COVID-19, this has changed single students’ willingness to hook up with students in these relationships, and students in these relationships to hook up at all.

Hoobnoob says that they are more likely to swipe left, or reject someone, on Tinder if “they have group photos on their profile or say they’re polygamous.” Neither of these things would have mattered pre-COVID.” The fact that Hoobnoob, who stated their project earlier as looking to explore casual relationships en route to a long-term monogamous one, was willing to hookup with someone in an open or polyamorous relationship is a testament to how normalized polyamory was at Oberlin before the COVID-19 pandemic.

Em, a queer senior in an open relationship, also writes about being less willing to hook up now. “I don’t really engage with hookup culture now because I have a long distance partner and even though we are open, I don’t want to risk expanding our pod. Also no privacy!!!”