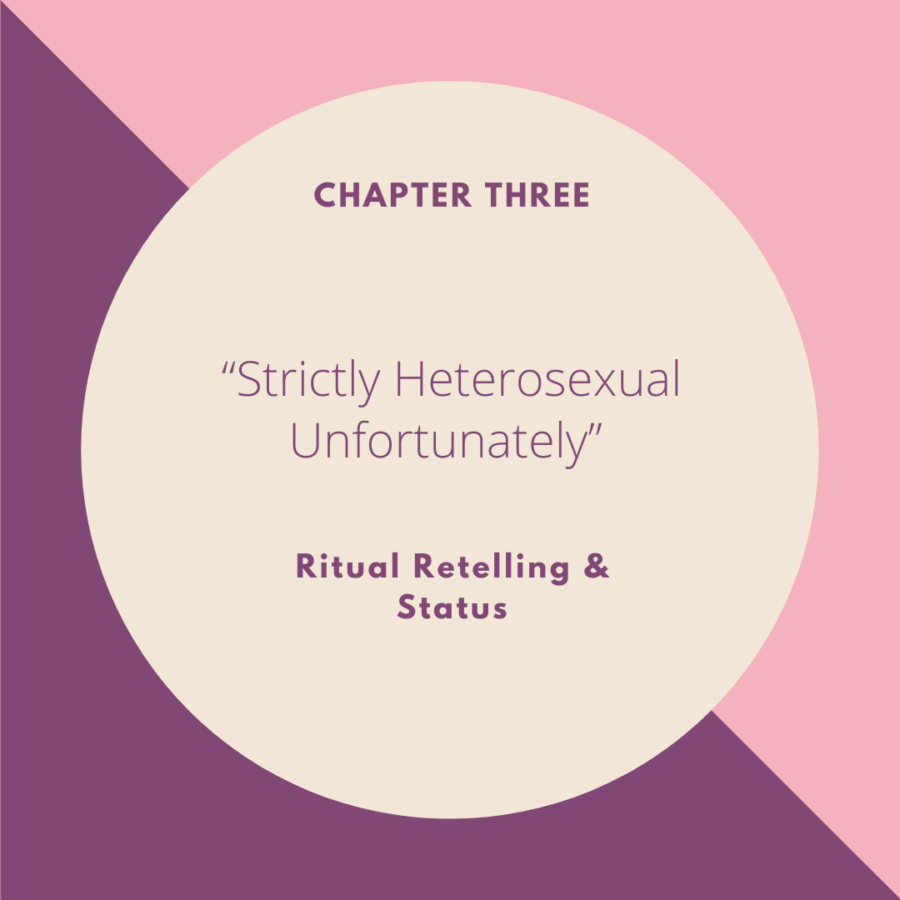 Oberlin’s location creates a bubble not just physically, but socially. During the pandemic, this has enabled the College to retain an exceptionally low case count, and prior to the pandemic the bubble effect created a social world that placed students under each others’ gazes in professional and academic settings as well as social and sexual. This created an environment where different areas of life easily blended together and made socializing with co-worker and friends inseparable from social networking. These networks not only define friend groups, but departments and extracurriculars; since all students live and work together on campus and in town, social success at Oberlin depends on social networks created between these students as described by Crossley in “Social Networks and Student Activism: On the Politicising Effect of Campus Connections.” Clubs, ExCos, campus jobs, classes, and studios are just as valid a way to meet potential hookups and romantic partners as parties and apps like Tinder — the campus’s favorite swipe app.

Students who frequent these places or work at these locations have a high exposure rate to other students, which increases their desirability because they are better known.

“I would say that the hookup scene here is often dictated by power dynamics: i.e., the ‘hipster elite,’ the social capital of older students/athletes/people who work in highly visible positions on or off campus (Wilder desk, [Mudd Center circulation desk], Slow Train Cafe, the Local [Coffee & Tea], etc.),” Catparent explained. “Although many people hook up with individuals outside of those dynamics, there is a constant awareness that who you’re sleeping with might be known by individuals who you are forced to interact with in those extremely visible contexts.”

The key features of these locations are their centrality to campus and to student life. Visibility equates memorability on campus, and the most memorable students often have the most “clout” or social status that they use as currency to exchange for real world tokens such as invitations to parties and job referrals.

Class year and race are also major features in Oberlin’s desirability politics. Ms. Crouton relates the following about his experience with race and hookups: “I think that Oberlin being a predominantly white campus, desirability politics certainly are present here,” he says. “The assumed image of an Oberlin student is a white person — and I think that’s what people look for when they look for partners. I certainly know more white people at Oberlin who graduate having dated consistently or who have been in relationships while at Oberlin, than people of color. I’ve heard from a lot of my peers of color that after a few years at Oberlin, they realize that post-grad is when we’ll find opportunities to date, as opposed to dating while on-campus.” Students of color, and especially Black students, have a harder time utilising the social networks available to white students at Oberlin because of the ways racism shapes friendship dynamics.

Ms. Crouton was not the only student to write about whiteness being a determinant of desirability at Oberlin. Kelly, a pansexual senior, also wrote that Oberlin’s hookup culture “can be a little toxic. I find a lot of it is entangled in social politics and ‘clout’ more than other hookup cultures I’ve seen. Very Tinder-oriented. Thin and white people ‘do the best’ by a large margin.” These physical features are determined by societal standards for beauty and are rooted in racism, misogyny, and fatphobia. So, by virtue of whiteness and thinness being markers of desirability these students have more “clout” or social capital, as described above, and therefore are more sought out for hookups than students of color and fat students.”

The last status feature that was mentioned was the status of being sexually experienced — a complicated dynamic on our campus. Oberlin has a reputation for being not only queer friendly but queer normative, or that every member of the student body is or should identify as queer. And while this is a welcome role reversal compared to the outside world, it can also lead to queer baiting and students intentionally labeling themselves as something other than straight in order to retain the social currency associated with having something other than a “boring” or “vanilla” sexuality.

In my survey, there were two instances of students embellishing their label to read as “queer.” One student answered the question “How do you describe your sexuality?” with “fun and flirty,” but later in the survey described themself as heterosexual. Along similar lines, Phoebe, from earlier in the chapter, identified themself as “mostly straight” in an attempt to link themself to queerness even if they are straight-passing. Links to queerness are also established by students passively “questioning” their sexuality, even into their final year at Oberlin. Another student described herself as “strictly heterosexual, unfortunately.” These are both exemplary of the ways in which even passive queerness is associated with higher status at Oberlin.

Gaining status through hookups can be a key part of the experience, and accumulates less through the hookup itself than through the story told about it in the days following. However, during the COVID-19 pandemic, hooking up casually is seen as a selfish act, so status tokens have become less entwined with hookups, at least for older students with more established social networks.

Before the COVID-19 pandemic, Oberlin’s hookup culture placed more importance on the positionality, also known by the folk concept of “clout,” of your partner on campus than it did on your attraction or compatibility. As established in the last chapter, students hook up to accomplish sexual projects, some of which involve enhancing their own social standing. Socially motivated sexual projects end with the employment of a “ritual retelling,” where students share the events of the night before with friends in an attempt to bring in the group and spread the story around their social circle as described by Carol Auster in the article “Ritual Retelling: Gender Beliefs in Post-Hookups with Same-sex and Cross-sex Friendships.” Now, during COVID-19, hookups are less talked about because students fear retaliation from the College for violating the COVID-19 Community Agreement. This removes a key element of the ritual of hooking up — sharing that experience with friends.

Ritual retelling validates students’ actions by affirming their choice of partner and enabling them to feel part of the “in” group of students who engage in hookup culture. This retelling is prevalent in hookup culture, but it is also prevalent in other realms of social life at Oberlin that are not connected to sex. It is a tool of status and network building. Hookups are a large part of that, especially on a small and isolated campus like Oberlin. Rather than through external validation and pressure from friends, I found that, during the pandemic, students are gaining this validation by pursuing partners that fulfill their personal sexual projects, which they had previously been suppressing in order to obtain group validation.

Students also reported feeling less inclined to talk to their friends about their interactions with consistent/long-term partners, even before the pandemic. Phoebe writes that “I give more details the less likely I think I am to pursue an actual relationship with the person. We usually talk about who orgasmed, if anything happened, if I’d want it to happen again, if I think they want it to happen again. It’s all discussed in a very joking manner, usually. It can feel like you’re expected to lightly make fun of the person you hooked up with.” Poking fun at someone you made yourself vulnerable to is a tactic to show your friends that you can accomplish the basics of hooking up — remaining emotionally unattached to your partner.

The motivation behind recounting tales of recent escapades is to establish common ground with your audience or to gain and exercise increased status. People choose partners for committed and long-term relationships based upon different characteristics than they do partners for casual or brief relationships. Entering into long-term relationships does not increase students’ status, and therefore they may not feel the need or the desire to recount their sexual activities with these partners. Also, as Ned Shneebly mentioned, there is frequently crossover between students and their sexual partners. Hearing about who else a potential significant other has dated or slept with can feel less like building camaraderie and more like building competition, especially on such a small campus.

Many at Oberlin like to act like they live in a world that is beyond the hierarchies of high school, but in many ways that is not true. I can distinctly remember moments from my own time at Oberlin when my friends saw that an older student or a student with more “clout” than us was interested in one of us, and then we would try and convince ourselves that this person was more worthy of our attention than others. The idea that we were hooking up with these people to increase our own social standing on campus would not have crossed our minds. I thought that we had built bonds with the upperclassmen we were involved with, and I only later realized that this was not the case when Commencement Week of my second year rolled around and I was only invited to events at night.