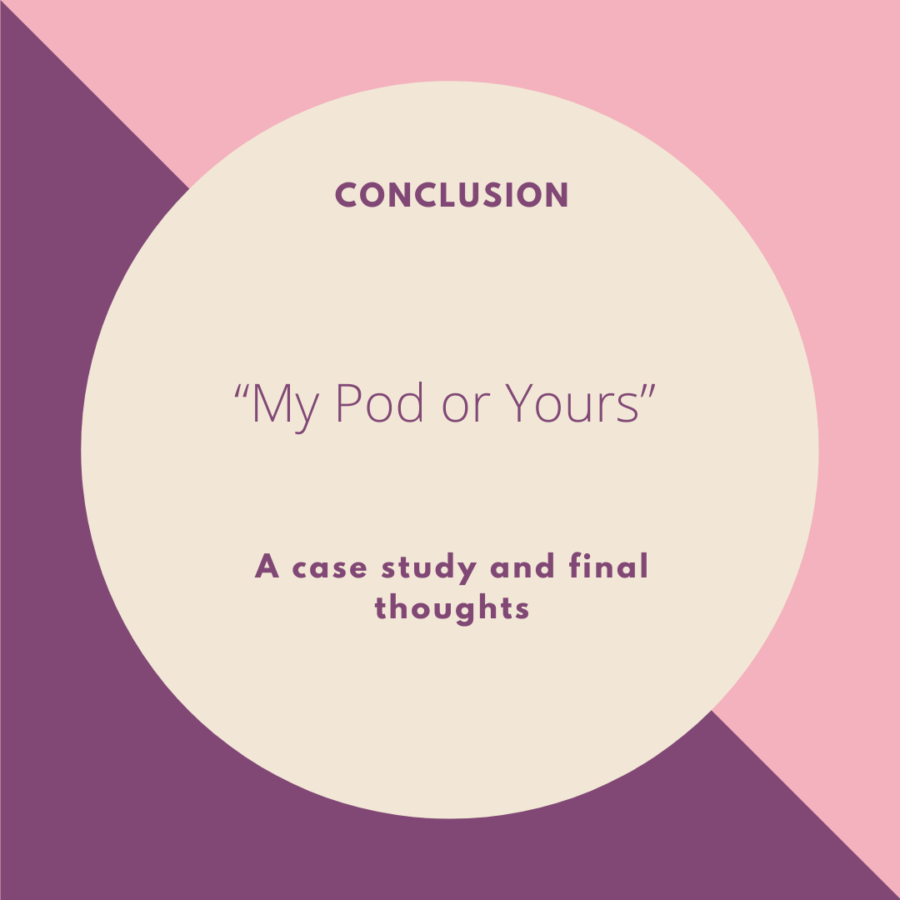 Violet began hooking up with a fellow fourth-year toward the end of the summer. They were both in the same pod and had known each other from around campus for a few years prior to when they matched on Tinder. Violet said that she would have been happy to keep things casual, but when her roommate arrived at their off-campus house for the start of the semester, both Violet and her hookup felt pressure to define things and decide on “my pod or yours.” They had only been unmasked with each other for about two weeks, but suddenly they were a couple. The pacing was too fast, and the relationship did not have the foundation to support the amount of time they spent together. They were speeding through milestones because COVID-19 forced them to make more joint decisions than any couple should at that point.

“It would have been nice if we had been able to spend more time with other people,” Violet wrote. “But, we were only podded with our roommates, and so we would sometimes forget we had other friends. Then when we broke up, everyone else had already settled into their pods and I didn’t have anyone but my roommate to hang out with until the end of the next testing cycle a month later.”

COVID-19 intensified all relationships, but drawing a firm line between dating and hooking up became difficult when so much of people’s lives had to merge in order to even explore a casual relationship.

For Violet, this was a confusing situation because her sexual project was not to be in a relationship. Also, she was not spending as much time with her friends and engaging in “ritual retelling,” and so the relationship felt more serious to her than it might have otherwise. I mention this story because I think it demonstrates the distortion of hookups during COVID-19. In many ways, COVID-19 has pulled people apart, separating them physically from each other for months. But, in ways like this, COVID-19 has also pushed people together in ways that are intense and sometimes impractical.

My most impactful finding was the element of sexual projects and the ways in which students either do or do not communicate their projects with each other. This concept ties into obtaining consent. Before COVID-19, consent pertained primarily to the physical acts that occur as part of the hookup. Now, I think that the definition of what requires consent in a sexual situation has broadened, as health risks have also increased. Communicating if you are seeing other people or if you are intending to see other people is now a part of relationships and hooking up — and that communication is as high-stakes as conversations regarding STI prevention and contraception. Also, as Oberlin is a campus that is receptive to polyamory, these sorts of conversations are essential to have before entering a relationship.

I hope that this research can be applied practically to the curriculum of initiatives like PRSM in helping students learn how to identify their own sexual projects and effectively communicate them to potential partners. This would create an environment where students feel more in control of their hookups and less at the mercy of their partner to tell them if they are in a relationship or not.

College is a time to develop relationships of all kinds, including one with yourself. I hope that the largest take away from this research is just how much this time of life is defined in relation to others — and stands as evidence of Oberlin’s strong community.