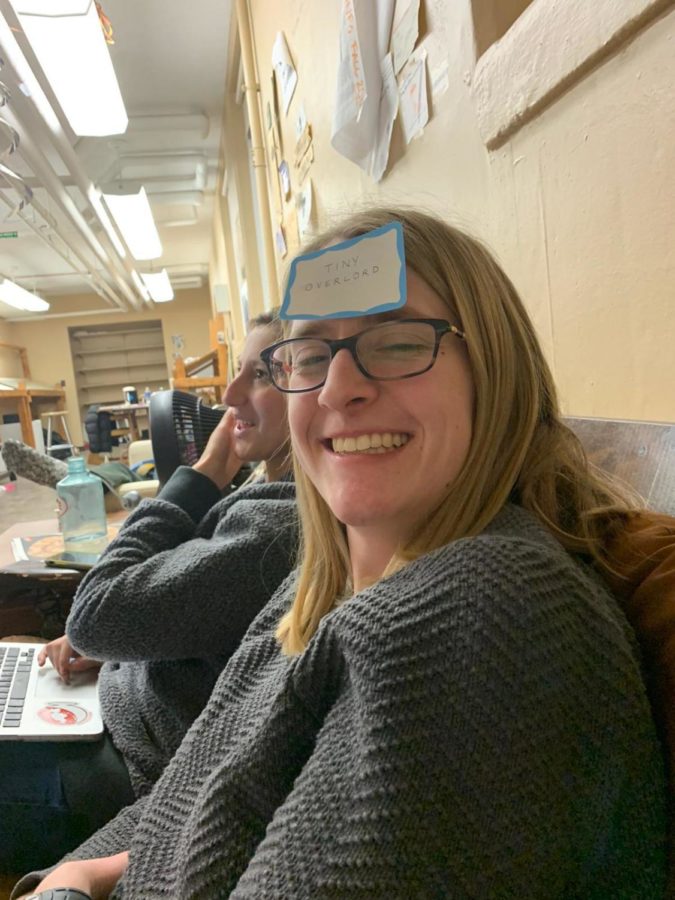 College fourth-year Allison Schmitt has been working for production since the spring of her second year. When she isn’t in the Review office furiously fact-checking the weekly COVID-19 update or sprinkling em dashes throughout articles, Allison can be found biking around campus with a helmet firmly fastened to her head for safety, practicing German with her co-production editor Jimmy Holland, and making sure everyone is okay at Review parties.

Why did you first apply to work at the Review?

I was really interested in getting involved with publications on campus. I’d always enjoyed writing and editing and things like that — just the grammar nerd inside of me, I guess — I wanted to kind of jump into the journalism thing and see if it was something that I wanted to do long-term.

How has production or the Review in general changed during your time?

I feel like we’ve had kind of varying levels of a strong community over the years. Especially last year — my junior year — it was a really intentional community and we did a lot outside of the office. For me it was just a really strong group of friends and coworkers, which was really cool. I feel like work-wise things have stayed pretty similar during my time. We’ve gotten stronger as Oberlin’s paper of record, the News-Tribune, closed [around the time] I started, [and] we really stepped into that role of being the sole journalistic publication on campus … no offense to other publications on campus.

What was the biggest challenge that the production team has had to overcome in the last several semesters?

I think in recent semesters especially we’ve all become a lot more aware of our positionality when we’re editing articles in ways to preserve the writer’s voice. We’ve become a lot more intentional and gotten a lot better at not just making edits because they fit the style guide, but also making sure that they still fit with the writer’s voice — I think we do our best to respect writers’ identities. That was something that I think had been difficult as a group in earlier semesters that I think we’ve been very intentional about working on.

Sometimes production has some truly heroic moments. Is there one in particular that stands out to you?

I really think one of the most heroic moments — or I guess weeks — was the last week that we printed, right before we were sent home last spring because of COVID-19. Morale was very low, we were all dealing with a lot, but looking back on it, it was really amazing how we all just kind of banded together as a group and really picked up each other’s slack and supported each other through publishing that last issue. Also, keeping up the office antics during that process was really incredible [while] reporting things that were still so raw and so personally really difficult for us.

You spoke about Review antics and I was wondering: do you have a favorite story or tradition that happens behind the scenes that the Review’s readership may not know about?

In a regular semester, going to Long Island Night at the Feve after Wednesday production [is] a big bonding experience for a lot of us. Also, outside of Long Island Nights and [other] official events, there’s just a lot of really chaotic banter that always seems to happen in the office — people just running from room to room with whatever new thing that has popped up, whatever new twist in an article or something like that — [the energy of] everyone just dealing with the kind of high stress situation of being in an office.

If you could identify with one or two style rules, what would they be?

I think it’s very poetic how we use “TKTK” to note when, “Hey, this thing is still unfinished,” or “There’s more to come here.” I just think that’s really cool because apparently … there either aren’t any, or there are very few words in English that have a “T” and a “K” right next to each other so we’re kind of playing with that language a bit. Maybe this is me waxing poetic about leaving here and being a graduating senior, but I’ve really been latching onto that [concept that] things are still in progress and nothing is static, so having something very specific in our style guide to note that is nice. Then the other actual style rule that is probably my favorite is the difference between en dashes and em dashes … I just think that the distinction between these two types of punctuation is really cool — before working at the Review I never would have figured that out. I think I’m an em dash, if I had to choose.

Do you have any last thoughts or parting words to those you are leaving behind?

I just want to thank everyone that I’ve worked with so far, everyone who’s picked up my slack, and everyone who’s helped to make this such a beautiful community. My parting words for everyone in the classes younger than me is to really hang onto this community and really just make it the best that you can, socially and as a group of mostly like-minded people and people who are all dedicated to being the paper of record.