The Oberlin Review • May 28, 2021 • https://oberlinreview.org/23923/news/off-the-cuff-with-miranda-harris-incoming-osca-board-chair/

Off the Cuff with Miranda Harris, Incoming OSCA Board Chair 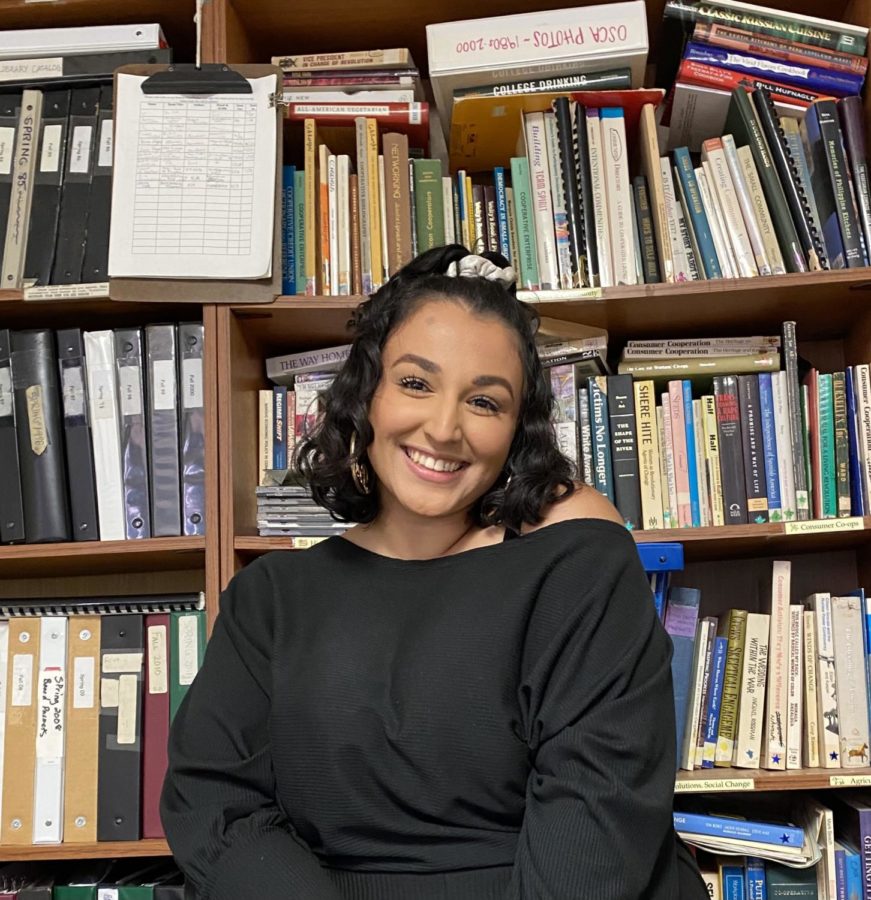 Harris will be stepping into the role of OSCA board chair.

College third-year Miranda Harris will be stepping into the role of OSCA board chair as the nonprofit officially reopens this fall. After three semesters of absence from the campus community and a brand-new rent contract with the College, dining and housing co-ops will return to campus this fall with Harris at the helm. The Review talked to Harris about the challenges of taking on OSCA leadership during this critical transition time and heard her vision for the future of the nonprofit moving forward.

What were your previous roles and relationships with OSCA?

I’m in Third World Co-op — TWC. My first semester I joined as a board representative, and then my second semester I was Dining Loose-Ends Coordinator, or DLEC, so kind of just coordinating everything that goes on with co-op discussions and being the point person on all main co-op functioning things. In this past year, OSCA has been closed, but I’ve been a board [representative] again. Now I am chair of the board.

So I’ve spent three semesters on the board and I’ve done a variety of things. I’ve seen rent contract negotiations — when we’re deciding about the costs that we have — elections, appointments, and bylaw revisions. This winter, we updated the OSCA bylaws and I wrote a lot of the revisions and those just got voted on and approved. That’s going to be one of the main things I focus on in my position going forward. I love being on the board and I really loved my semester as DLEC as well because you get to know the co-op so well. You’re very visible, so it’s like you become even more a part of the family. I put a lot of myself into OSCA, and it’s nice to get that back in terms of getting this community that’s there for you and that you go home to.

What have been the most salient changes you’ve seen in OSCA during your time?

It’s really been the rent contract, especially because it impacts how we open the co-ops. We have to fill co-ops rather than just unilaterally opening all of them. That has changed the co-ops that we’re able to open — we can’t open Old Barrows, the safe-space gender housing. We’re going to really try to boost interest and get the word out about it in the future so that we can open it then. We also updated our scholarships with the increase in the price of OSCA. Before, we gave need-based, $500 or $1,000 scholarships. Now it’s going to be half the cost of OSCA or the whole cost of OSCA. We’re updating the bylaws, which updates the elections process — there’s been a lot of elections updates as well. We’ve made a lot of the processes more clear, especially with major objections — that was a big thing that was going on when I was on the board.

There’s a big conversation within OSCA about how many of the co-ops can be such predominantly white spaces. What are your thoughts on the future of OSCA as a more welcoming, representative community?

I hear this a lot. We have a safe space co-op for people of color — and I think that’s wonderful. It’s been personally so meaningful to me. Literally the single most important thing from my Oberlin experience is TWC. It’s the thing I love most at this school; it’s my family. I want to push back against the notion of OSCA being such an inherently white space, because it literally has a whole co-op that is for people of color and that’s something really special. OSCA officers have committed themselves to always making sure that TWC will be open every semester that OSCA is operational. I think that centering the safety, the community, and the presence of people of color in OSCA is very much a part of OSCA. If we all kind of broaden our world view a bit more and keep that in mind, it becomes a lot more apparent, a lot quicker.

As you are stepping into this leadership position, what is your vision for OSCA moving forward?

A lot of the things we do and want to be are centered around community — community within OSCA as well as the larger community of Oberlin. I’ve really been enjoying working with the OSCA alumni. They have a working group with us to try to get the alumni back involved with OSCA and create this community and a sense of institutional memory and mentorship. OSCA alumni are really happy and willing to come back and work with us, do workshops, cook us brunch, do career workshops on life after OSCA and how to use these skills in the real world, and just share their memories and their traditions. The incoming treasurer, double-degree third-year Emily Springer, and I have also been working on a leadership retreat for the incoming co-op leadership, keeping in mind that we’re going to have so many new members. That’s something I’m really excited about — to see all of the new, fresh faces in OSCA and to pass down the knowledge and plant the seeds of OSCA to grow and to see other people begin to see themselves becoming a part of this organization in the same way that I have. When you pour more of yourself into it, it’s reflected and you can see that; you can tangibly see your experience lasting and it gives so much back to you. I’m excited for everyone else to get that. We’ve also been thinking about ideas for like OSCA-wide fun events …  to develop a greater sense of community, as well as interacting with the greater Oberlin community.

What are some of the challenges you anticipate facing in the coming semesters?

The biggest thing that I’m staying aware of moving forward is that everything is going to be new because of the new rent contract. So much has changed in the way that All OSCA is going to operate as a result. We’re kind of going in and there is no institutional memory really, because it’s all been kind of changed a little bit, so we’re the ones to lay the groundwork for how things are going to look for the next, at least, five years. I think a lot about making sure that we execute it properly and set OSCA up for success in the future. I know that there will always be great leadership, but I want to make their lives a little easier. It’s a very pivotal moment. It’s kind of like taking on a large task because what you decide and every choice you make is then going to influence how OSCA runs for the rest of its existence. Also, just getting everybody trained and teaching everybody we’re kind of getting ahead of it a little bit, but that’s obviously going to be a huge undertaking — to train all the new membership. We have a lot of ideas like working with the alumni to share their knowledge so that it’s not just a few co-op-ers having to do all of this training.

Is there anything else you wanted to add, or that you feel people should know about OSCA?

The OSCA waitlist for dining co-ops will be open until July 31.