In The Locker Room With The Holder Squad 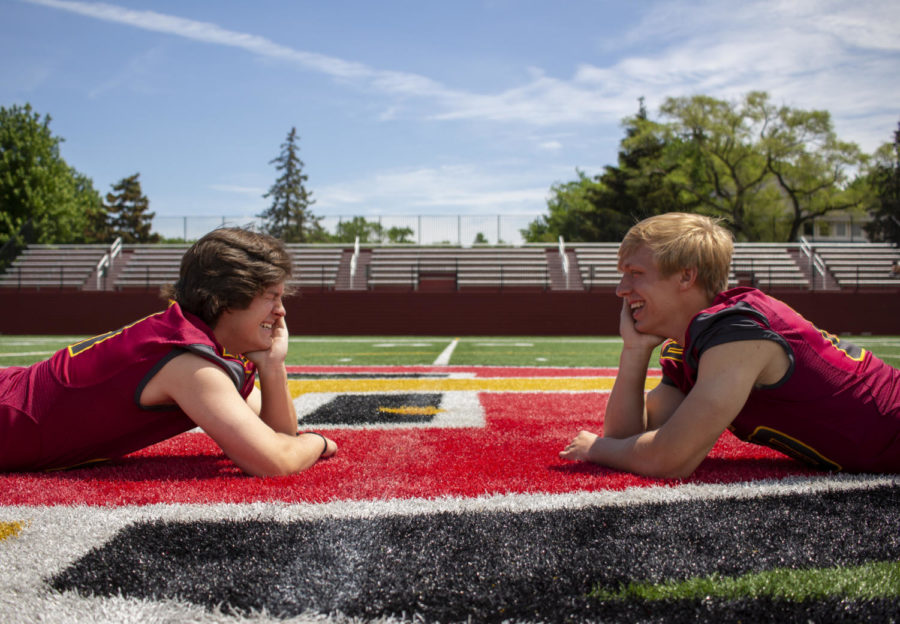 College second-years and football players David Strunk and Bear Broyles are inseparable, supporting each other both on and off the field. From playing football together to having matching portraits, there is no friendship more wholesome. The pair is active on social media, running a joint Twitter account to celebrate their friendship and their teammates’ accomplishments. No matter what life throws their way, together they are unstoppable.

You both are well-known on campus for your dynamic friendship, how did you guys meet?

Bear Broyles: We met the first day of preseason because our lockers were right next to each other. By the second day, we were best friends.

David Strunk: On the second day when we spoke, it became apparent that our friendship was forever.

What is your favorite memory with each other?

DS: My favorite memory with Bear was around week four of freshman year and me and Bear were the last ones eating with the team because we’re both slow eaters. And our old coach walked over to us and said, “You know, we might not be having the best season, but I did something right here,” and pointed at me and Bear. We look back at that memory with a lot of joy.

BB: It was day five of knowing each other at fall camp and it was the day where all of our parents could come visit us. As we were coming off the field, David looked over at my family and said, “Wow Bear, your girlfriend is pretty hot.” And I said, “That’s my sister.”

You recently had matching portraits commissioned, what was that process like?

BB: One of our favorite movies is Old School and at the end of the movie the Godfather has a portrait of himself, so we wanted to get similar portraits.

DS: We watch [that movie] about once a week. Bear’s sister painted them for us and they look great. Mine is a little bit better, not to brag or anything. We’re also planning on doing a holiday card this year in front of our house with our housemates wearing holiday sweaters.

DS: I wasn’t touching the field at all my freshman year and I was dying for some attention. So I figured that we could make this funny Twitter account. Bear is the starter holder and I’m the backup holder so “The Holder Squad” was born. I’m in charge of the creative content and Bear does the editing and posting.

BB: We came up with the idea when we were at Lupitas on a Tuesday night. I’m in charge of the proofreading and I’ll come up with an occasional one-liner.

How did you manage quarantine when you weren’t together?

DS: A lot of late nights on the phone and sending funny snapchats complaining about our lives. But it was all just a buildup for coming back to Oberlin because we knew that we would see each other and I would be 21, which would be big for us.

BB: We didn’t see each other for six months, which was tough, but we Facetimed everyday. We would try to post occasionally on Twitter, but being apart made it more difficult.

Now that you’re back together, what are you looking forward to this fall season?

DS: The sky’s the limit, we’re going to do some big things and I have a lot of faith in us. We also have two away games, so we’re hoping to be in the same room. This is actually a formal request to Coach [Opgenorth] to let me and Bear sleep in the same room.

BB: We’re looking forward to our first season in general, we didn’t play last season, and it’s our first season with Coach O. So we’re excited to be back on the field for the first time in two years and under new coaching staff.

How does your friendship translate to the field?

BB: There was one time that we were kicking an extra point and I was out on the field because I’m a starting holder. We were missing a guy on the line, but David was the first guy to run out and block for the extra point. He’s always there when you need him.

DS: We ended up making that extra point because of my block. But we don’t really play on the same side of the ball anymore because I play defense and Bear plays offense. So, telepathically, during games we help each other.

What are your plans for the future?

BB: We want to go to graduate school together at the same university. I will hopefully be going to law school, and David will be going to film school.

DS: And when we’re older, we want to live next to each other or have a compound with both of our families.