Moving beyond Matryoshki: Supporting LGBTQ+ and BIPOC Students in the Russian Department 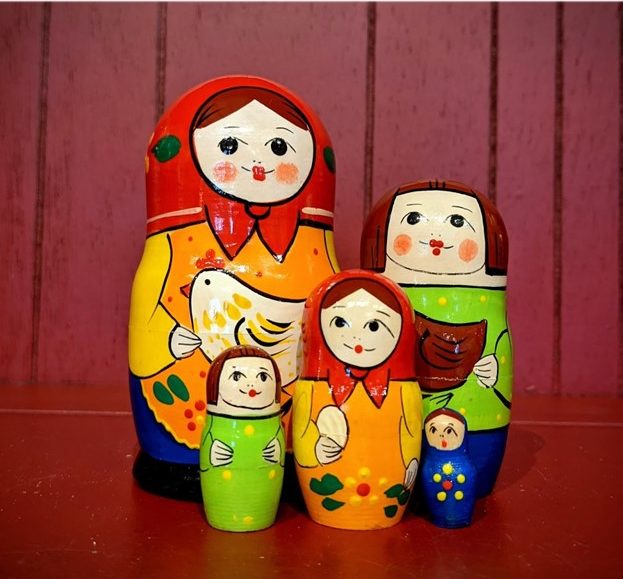 The matryoshka doll typically depicts white peasant women and their families which epitomizes a falsified image of Russian culture as essentially white or socially conservative in nature.

Editor’s note: This author graduated from Oberlin in May 2020 and helped organize the Russian Symposium student workshop, which took place on April 17, 2021. This article addresses homophobia, transphobia, and racism.

Five years ago, I was sitting in my second-year Russian class studying wedding vocabulary. According to the textbook, in Russian grammar, men can only marry women, women can only marry men, and no one exists outside the gender binary. While my language textbook led me to believe that Russian speakers simply don’t have the words to acknowledge the LGBTQ+ community, I learned years later about the vibrant culture of gay, trans, and nonbinary Russian-language speakers who are creatively adapting the Russian language to express themselves. Looking back on it now, I wonder, “Why weren’t we studying that?”

On April 17, Oberlin hosted the first-annual Russian Symposium, “From Russian Studies with Love: the Future of the Field,” bringing together faculty and students from Ohio Five schools and other select universities to open the conservation about building a more inclusive curriculum. The eight-hour symposium, organized by Visiting Assistant Professor of Russian and East European Studies Nicholas Bujalski and Russian Faculty in Residence Maia Solovieva, primarily featured faculty research, but from 1 p.m. – 2:30 p.m., students took to the Zoom stage. In the student-only workshop, facilitated by first-year Charlotte McDermott, third-year Katie Frevert, and myself, 17 students and alumni shared their experiences in the Russian department and proffered solutions to what they viewed as the department’s shortcomings.

One of the primary topics of the student workshop was deliberating on ways the department can better support LGBTQ+ students. Several people indicated the importance of normalizing the use of nonbinary pronouns in Russian language classes and educating professors about gender identity and expression. In addition, given Russia and many post-Soviet states’ reputations for homophobia and transphobia, students indicated a need to be more comprehensively informed about the experience of living in Russia as a member of the LGBTQ+ community before studying abroad. They suggested that the department provide lists of safe spaces for LGBTQ+ students in Russian-speaking countries and connect students with LGBTQ+ alumni who have studied abroad. Finally, students hoped for professors to incorporate news about LGBTQ+ rights in Russian-speaking countries into the classroom discussions more regularly.

The whiteness of the Russian department was another concern raised in the student workshop. At the moment, the Russian department at Oberlin has an all-white faculty and a majority-white student demographic. The curriculum of Russian culture and history classes also tends to focus on white history, omitting Russia and the former Soviet Union’s incredible ethnic and religious diversity among people of color. One student noted that the syllabus for their literature class lists almost exclusively white authors. Students reflected that Russian language, culture, or history classes often present a monolithic idea of Russia as white with rigid gender norms, failing to acknowledge the existence of millions of non-white Russian-language speakers.

The omission of non-white voices from the syllabi and the predominately white student and faculty demographic means that students of color may have a harder time finding their place in the department or feeling a connection with the course material than white students. In the student workshop, people suggested that the faculty and administration need to work harder to showcase the racial, cultural, and religious diversity of the Russian-speaking world by redressing white-washed syllabi, bringing lecturers of color to classes virtually or in-person, collecting demographic information about their students since currently no data exists, and communicating with other departments already engaged in anti-racist work.

For both LGBTQ+ students and students of color, study abroad can be a major hurdle in their Russian studies. In fall 2018, I witnessed first-hand the bare-faced bigotry that many prospective study abroad students fear they will find in Russia. I was living in Saint Petersburg with a 71-year-old retired shipbuilder named Nadezhda. She harbored every phobia — transphobia, homophobia, xenophobia, you name it. One night while watching TV, she turned to me and asked, “if tomorrow you decided that you were a boy, do you think your mother would still love you?” “Yes, of course,” I responded. She wagged her finger. “No, she wouldn’t.”

In a recent chat, the instructor of the course Advanced Russian: Cross-cultural Communication II, Solovieva, shared that she had always seen it as her duty to prepare students for these kinds of intolerant interactions. And while students certainly need to be informed about Russia’s discriminatory anti-LGBTQ+ laws and racial prejudices, many students in the workshop emphasized the need for faculty to introduce students to the queer communities that exist in the Russian-speaking world. To assume that the entire Russian-speaking community is populated exclusively by the Nadezhdas of the world is to erase the existence of LGBTQ+ people, people of color, and their allies who very much exist in Russia.

In regard to study abroad locations, some students noted that Oberlin tends to direct students to apply to programs in Russia’s largest European cities, Saint Petersburg and Moscow. Encouraging students to study abroad in smaller towns in Siberia or Central Asia would open them up to a less Eurocentric perspective on Russian and post-Soviet culture.

In the weeks since the Symposium, the Russian department at Oberlin and across the Ohio Five schools has demonstrated their commitment to transform students’ feedback into action items. So far, the Oberlin Russian department has indicated plans to write a statement of intent to be posted on the department’s Oberlin.edu page demonstrating a commitment to the support of LGBTQ+ and students of color in the pursuit of Russian students. The department is also looking for students interested in helping produce resource guides for LGBTQ+ issues such as pronoun usage and safe spaces in study abroad locations. Thanks to a grant-writing collaboration with professors at Wooster and Kenyon, Oberlin plans to host another Russian Studies speaker series this upcoming fall which will focus on the issue of race, gender, and sexuality in post-Soviet spaces.

This is an exciting time for the Russian department and the field of Russian Studies. As Bujalski notes, “there is an encouraging critical mass of scholars, students, and activists in the U.S., E.U., and Russia who are intellectually and politically committed to a more inclusive Russian language,” and Oberlin is at the forefront of this movement. So, whether you’ve taken one class or 10 with the Russian department, keep an eye out for its transformation. Send feedback to the faculty and offer help if you have the time and energy. Together we can push the department to meet the needs of every student.