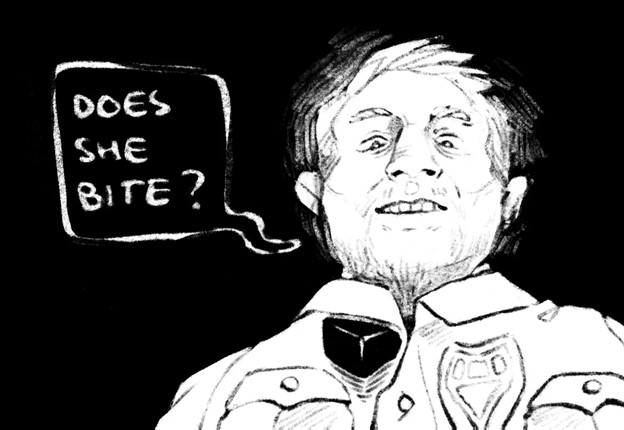 Three white Campus Safety officers approached me and six friends while we were laughing, recounting an exhilarating board game experience on a Friday night at 11 p.m. We were in the common space on the first floor of a dorm, but they came from upstairs. I could hear the squeak of the radio, their boots clomping on the stairs before I saw them.

Despite it not being quiet hours, despite not receiving any kind of neighborly appeal, despite not even playing loud music or breaking ObieSafe room capacity guidelines, an anonymous “Karen” student called Campus Safety on us. A female officer spoke to my friend and, citing a noise complaint, began to reprimand them. The officer maintained that, even though the mask mandate was over, we had to continue social distancing.

The officers themselves weren’t masked and weren’t six feet apart. I don’t think it’s very hygienic — very ObieSafe — to put your hands in another person’s hair, but that’s what the male officer did to my shy roommate. The officer had a very important question for him; he needed my roommate’s attention, his male familiarity.

“Does she bite? Does she bite?” the officer repeated, over and over, ostensibly talking about the dog in attendance. Standing over my roommate’s armchair, the officer was expecting a response.

My roommate shrank down, clearly uncomfortable. He said nothing.

The punchline came anyway. “I’m not talking about the dog; I’m talking about her,” the officer said, referring to my female friend sitting on a different couch. “Does she bite?”

“Sorry,” he said, staring me down. His gaze didn’t leave me — even as my friend continued to speak to the censuring officer and the moment seemed to pass.

I wasn’t settled. “It’s rude because you’re talking about her like she isn’t even here,” I said, addressing his stare.

“Didn’t I apologize?” he shot back.

“Well, you just said sorry; you didn’t explain, so I wanted you to know what you did wrong so you know what not to do in the future.”

He thanked me with steel in his voice, and I said, “You’re very welcome.” If he is truly thankful, I hope he comes across this piece. I have more to say, away from his unrelenting look, from his eye-scan search to find something to put on me, trying to make me feel small.

You’re a Campus Safety officer meant to keep us from harm, and you came up behind an Asian student and obliterated his comfort zone. You put your hands in his hair — I’ve heard people fetishize Asian hair in 100 different ways, and now I’ve watched you stroke it.

You wanted him on your side so that you could make a misogynistic joke. He doesn’t want to be a part of your chauvinism. He is not your ally. He knows better, as should you, a professional protector.

Does my female friend bite? What is a biting woman to you? I truly didn’t know, but it rang of sexism, sexualization, and disrespect. By comparing her to an angry animal, a biting female dog, the word “bitch” is tacit. Why did you single her out, this student who wasn’t paying attention to you? Did it turn you on?

I looked up “Does she bite?” and it was all about sex. Urban Dictionary explained to me that the phrase “she bites” describes the type of girl who bites a guy’s d**k when performing head. What are you doing, sir? Why is that the vulgar presence you bring into a room of young people? It is repulsive.

I don’t “bite,” but I have an amusing anecdote about talking during the act, through the door, to a roommate. No d**k — nothing — can keep me from speaking, not at my school. Not when I notice my female friend being bestialized, eroticized, degraded, by a person who is supposed to protect us at our school.

And of course, you can find a way to hurt me. In your position of authority at the College, all you need to do is paint me as a threat — a rule breaker — as revenge for your damaged ego. People will believe you over me. You just need a reason, and you’re looking for it, up and down and over me, to put me in my place, because I had the audacity to defy your vile humor. You found none, but that doesn’t mean that I got to leave the situation with any kind of peace of mind. You made sure of that.

On the walk home, I talked about it with my other roommate, a good friend, a white guy. He fully noticed the menacing stare you directed at me. He vowed to stand by me when I tell this story. He mentioned that he was surprised that the other two white officers, the female ones, didn’t get involved.

“If he could walk into the room and make such an obnoxious comment for no reason, he probably generally creates a toxic, sexist workplace that they don’t feel free to speak out in,” I assumed. After all, these moments — the inappropriate touch, plus the perverted comment, plus the threatening stare powerplay — aren’t isolated. This indicates the disgraceful state of your humanity. You are in the wrong job, corrupting my school, violating people who matter in this institution I love so much.

Your supervisor will be made aware of this incident.