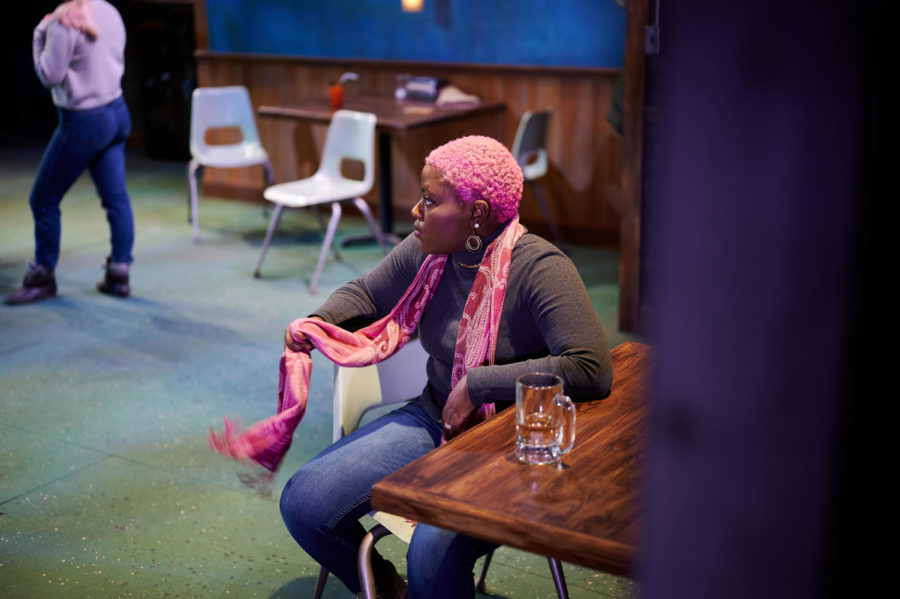 After a two-week delay and much anticipation, this past weekend the Oberlin College Theater Department debuted its first-ever pre-recorded mainstage production: Twilight Bowl, directed by Professor of Theater Paul Moser.

The entirety of the play takes place in the bar of a bowling alley in rural Wisconsin where our main characters, Sam, Jaycee, Clarice, Sharlene, Brielle, and Maddy try to maintain their bonds with each other through intense and difficult life changes. The play grapples with a plethora of heavy issues like incarceration, drug addiction, abortion, and religion. However, the richness of the story lies within the nuances of female friendships.

Originally intended to be a live performance held in Hall Auditorium, Twilight Bowl was interrupted by COVID-19 and restricted by ObieSafe protocols. After successfully putting on the College’s first-ever audio play in November, the Theater department took the continuing restrictions as an opportunity to breach a new depth of uncharted territory, and Twilight Bowl was thus adapted into a pre-recorded and edited production available for online viewing. Assistant Director and Assistant Stage Manager Sophie Falvey, a College third-year, rejoiced in this decision.

“I was afraid going into this year that there was just going to be no theater whatsoever,” Falvey said. “There was a lot of [cancellations and shutdowns] during the pandemic and then, secondarily, there was a lot of Zoom theater, most of which winds up being not so good because no one knows how to do Zoom theater. I think [Twilight Bowl] was a really good workaround and very industrious on the part of the department.”

For Theater majors nearing graduation, the opportunity to act in-person was celebrated. After performing in The Misanthrope, Oberlin’s first ever audio play last fall, Bailey McWilliams-Woods, OC ’21, thought she would never perform in the physical presence of other actors again before graduation.

“I felt very lucky to have this chance — even though we didn’t have a live audience — it still was a play and I was able to be onstage and I think, most importantly, just working in-person with other actors was something that I definitely missed throughout COVID and in the fall,” said McWilliams-Woods, who played the character Brielle.

As is true with any theatrical production, the cast and crew of Twilight Bowl encountered challenges and surprises along the way, with added obstacles from the film medium itself.

“The major thing that the actors had to adjust to was volume,” Professor of Theater and Director Paul Moser wrote in an email to the Review. “Microphones can pick up even a whisper, and speaking loudly or shouting can ‘overwhelm’ the sound track. So actors had to maintain the active intensity of some exchanges while cutting way back on their volume.”

Visiting Instructor and Lighting Designer Jeremy Benjamin also experienced a learning curve when lighting for the camera instead of the human eye.

“One of the things I found very different was I would tend to light the scenes a lot dimmer in Twilight Bowl because I was lighting it for the camera and I couldn’t rely on what I was seeing with my eyes,” Benjamin said. “What looked to me, with my eyes, as being incredibly dim … for the camera it was perfect.”

Clarissa Heart, OC ’20, videographer for the Theater department and one of the film’s editors, believes that Twilight Bowl had one foot in a theater production and one foot in a film production.

“It was a really unique experience, and it was fun, but there were a lot of mistakes made — on everyone’s part — just because we were all theater people, familiar with theater terminology and staging,” said Heart. “There’s a joke in film like, ‘Oh, we’ll fix it in post.’ And, especially as a theater person, you don’t necessarily realize the limitations of what you can do in post. … It just has a weird liminal space kind of feeling — like the actors are cheating out, but they don’t really need to cheat out when it’s a film. So, it reads very much as a high-quality film stage production.”

According to Moser, recording the performance also had its advantages.

“I think some things actually worked better on camera than they would have in a live performance,” wrote Moser. “I think being able to have close-ups of the actors during these segments, something you cannot do live, actually draws in the audience in more.”

What comes across in the recording is not the newness of the experience, but the intentionality and thoughtfulness of the play and its actors and direction. For one thing, every character in Twilight Bowl is a college-aged female, which was a practical choice for Moser.

“As theater educators, I think it’s important to provide an adequate number of really good performance opportunities for our acting students (at least three quarters of whom are now women), and I wanted to find a play that was written for either all women (or mostly all women) for that reason,” Moser wrote. “I also like to do plays where the characters are ‘college age,’ so the actors can focus on fully developing their characters rather than pretending to be middle-aged.”

This choice was duly noted and appreciated by the Twilight Bowl actors.

“The story is uniquely female-driven, and I would say this play definitely passes the Bechdel test,” said College third-year Jane Hobson, who played Jaycee. “I mean, we don’t even talk about men very often, [and] that’s one of the things in the Bechdel test: ‘[Are] there scenes where women are talking and not talking about men?’”

The characters are a realistic and multidimensional array of midwesterners, but that didn’t necessarily mean bringing them to life was an easy task. McWilliams-Woods, who was born and raised in Kent, Ohio, found her character, Brielle, difficult to embody because of just how similar their backgrounds were.

“In the past, I’ve been able to make bolder choices when the character doesn’t feel like me at all,” said McWilliams-Woods. “It was just more of a challenge to try to figure out how to not make Brielle just a copy of me and how to make sure that she was her own person.”

College third-year Diwe Augustin-Glave, playing the character Clarice, had a very different experience: they had to find ways to implement their own identity into a role that did not originally account for it.

Unfortunately, the delight of Twilight Bowl and the novelty of the Theater department’s first pre-recorded mainstage was short-lived, as it is no longer available to be viewed online.

“It’s kind of sad because the window already closed to watch it, so it doesn’t feel like it quite lasts as long as a normal run of a play would have gone,” said Hobson. “That being said, it’s kind of cool to have something that just exists in time for a few moments.”

As the College’s ObieSafe guidelines loosen and auditions for summer productions begin, it’s just about time to leave behind creative, socially-distanced solutions, but hopefully, the lessons learned during Twilight Bowl will inform the future of the Theater department.

For instance, Heart believes that the department should pursue filming more mainstage productions.

“I think that that kind of experience needs to happen more because that’s the closest to working on a real film set that literally anyone working on an Oberlin [theater production] can get, and I think a lot of Oberlin students want to go into film,” said Heart. “I think that this was a really good first attempt and hopefully the department keeps doing it.”