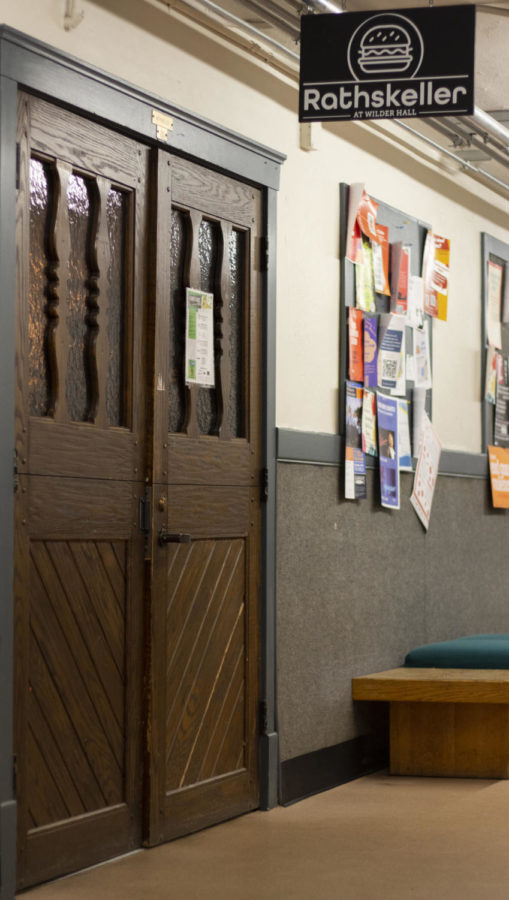 The Rathskeller, which traditionally serves burgers and sandwiches, will be closed this summer alongside Umami, Lord-Saunders Dining Hall, and McGregor Skybar.

Students returned to campus for the summer semester to find several new changes to the College’s dining halls. The College has negotiated a modified dining plan with AVI Foodsystems that leaves three dining halls closed for the semester: Lord-Saunders Dining Hall, the Rathskeller, Umami, and McGregor Skybar. While these locations will be closed for the summer, this week the College reopened sit-down dining in Stevenson Dining Hall and Azariah’s Café for the first time since March 2020.

In addition to more limited summer dining options, the plan has also limited the hours of Clarity, Heritage, Biggs GoYeo, and Azariah’s Café.

Clarity and Heritage will have hours limited to 12 p.m. – 6:30 p.m. and Azariah’s Cafe at Mudd Center will not have evening hours. While some hours are limited, students will have more flexibility with dining options with dine-in options at Stevenson Dining Hall and Azariah’s Café.

“Dining halls have just re-opened this week and as we navigate the logistics of hiring dishwashers and dining room maintenance help, conversations have also been steered towards the ‘community’ aspect of our mission,” Director of Student Life Auxiliary and Special Projects Wayne Wood wrote.

Some of the community-building initiatives AVI is seeking to adopt include collaborating with student groups on events like TGIF. AVI is also hosting weekly dining meetings and restarting the Dining Ambassadors program to connect students with dining staff.

According to Wood, the reasoning for the College’s decision to modify dining services stemmed primarily from the smaller student body during the summer semester. Budgetary constraints and feedback provided by students over the previous semesters were also factored into the decision.

“With the reduced student population on campus, the College negotiated a corresponding reduced dining operations schedule as part of the original contract with AVI signed in July 2020,” Wood wrote in an email to the Review. “As we moved through the ’20 – ’21 academic year and learned which new operations were proving to be popular among the student community, we expanded summer operations with a strategic mindset that balanced operating costs with the reduced student population.”

For College third-year Daniel Bevacqui, who previously enjoyed dining at Rathskeller,  Lord-Saunders Dining Hall and Umami, the news of the new dining plan has let him down.

For many College students who have classes in the later afternoon, 6:30 p.m. is considered a prime dining time, and the early closure of these locations may prove difficult to plan around.

“I’m lucky to live in an apartment this semester where I have my own kitchen and cook most of my meals,” said College third-year Clara Zucker. “I don’t like to eat at Stevie because I worry about the cross-contamination of non-gluten-free food with gluten-free food — my celiac disease is unfortunately pretty bad. Without my own kitchen, the new dining hall hours would definitely be pretty difficult for me.”

Yet for College second-year Barry Zhang, the recent dining changes have been much less impactful, and he has genuinely appreciated the new hours that Biggs GoYeo has been able to offer.

“The changes in summer dining have not affected me in any way as I have only eaten at DéCafé and Stevie this semester,” says Zhang, “Last semester, I visited Umami frequently because I took a class in the Environmental Studies building. But, this semester, that is not the case, because I haven’t had any reason to be on South Campus. That being said, the additional times for Biggs’ smoothies has been nice, and I’ve taken advantage of that.”

As a student who moved to Village Housing for the summer semester, Zhang has also appreciated the flexibility he has to cook his own meals, and he feels that most of his dining needs are met.

“I’m generally able to get what I need, although I wouldn’t call myself a very healthy eater,” Zhang said. “Sometimes, when I’m craving food that isn’t offered by campus dining, I’ll just make it myself since I’m living in Village Housing this semester. But that might be a special case since I grew up eating Chinese food, which isn’t really offered on campus.”