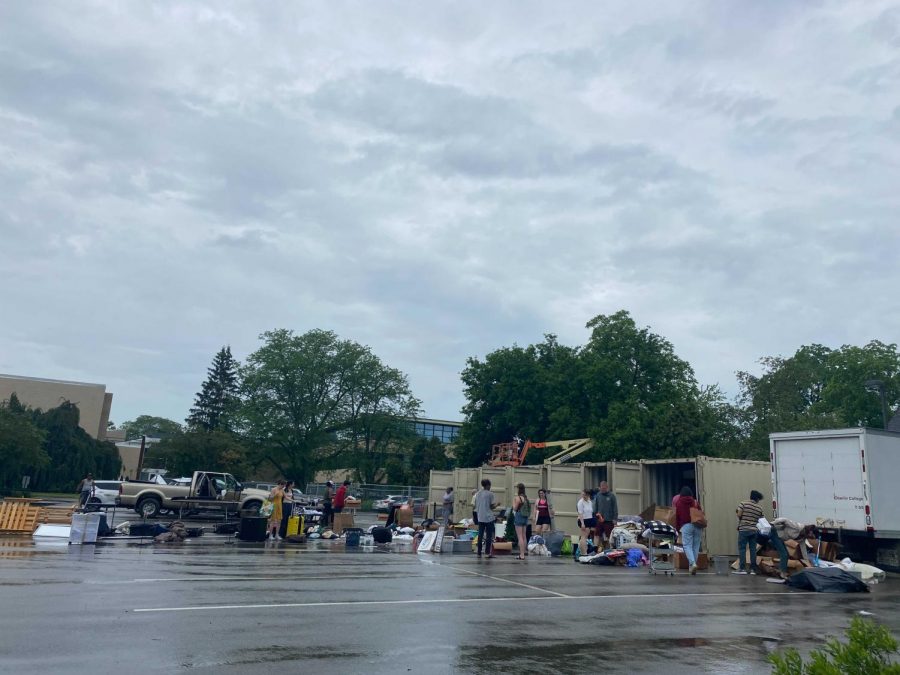 This week the College redistributed many of the items left on campus during the rushed move-out in spring of 2020.

After a 10-month process of returning the belongings students left on campus in March 2020, the College opened access to students and community members to take unclaimed items on Wednesday. The College had previously kept students’ belongings in 13 trailers located behind Kander Theater.

When students left campus in spring 2020 due to the COVID-19 pandemic, the College instructed students to leave behind any belongings they couldn’t take with them in labeled boxes in their rooms, assuring students that they would be reunited with their possessions. However, throughout both fall 2020 and spring 2021 semesters, students reported difficulties retrieving their lost items.

In an April 16 email to the student body, the Office of the Dean of Students informed students that they had until May 3 to contact the College about retrieving their belongings before the College asserted ownership over the items. The email offered two options through which students could recover their belongings: students could coordinate with Assistant Director of Operations and Communications Brice Wilson to return to campus and collect items, or request that their items be shipped to students’ homes at their own expense.

Wilson feels that the project was successful, reporting that he successfully returned 70 students’ belongings when they arrived on campus at the start of the summer semester.

“Although there are some students who may be unsatisfied with the process, this has been a 15-month process that started with the five tennis courts at Williams field house full head-high with items,” Wilson wrote in an email to the Review. “To have it down to four trailers was an accomplishment and we have over 95% success rate on item returns. … I feel like the summer and fall arrival, and this final re-distribution process was a great success and was executed by interdepartmental teamwork with Facilities, the Dean of Students’ Office, and [Residential Education] Office.”

Still, many students feel that they weren’t given enough time to retrieve their belongings before the College took ownership over the items. Val Zhang, OC ’21, expressed frustration with the way the College handled people’s personal effects and wishes that the College had created a more organized system to follow through with its plan of safely returning students’ belongings.

“According to some students I talked to, they expected the College to keep their items until at least this fall semester,” Zhang wrote in a message to the Review. “I don’t think the College has enough time/opportunity for students. Considering how chaotic the situation was last year during the pandemic, I think the school should have expected a large amount of items to be organized and stored. They should’ve also prepared a comprehensive and responsive plan on storing before making any commitment and promises to students.”

However, Wilson maintains that the College worked diligently to reconnect students with their belongings.

“The Dean of Students office sent an email to students we identified by name notifying them they had two weeks to respond to the email and set a May 3rd deadline,” Wilson wrote. “I personally fielded many inquiries after this date requesting sanctuary for their items because they planned to return in the fall and may not have read the email. Others were graduates. I met a few people who drove out from the East Coast on a Saturday to reunite them with their things. I also sent follow-up emails to people who did not respond if they had large piles of items, and several students responded favorably.”

According to Wilson, much of the contents of the trailers were loose items students had not been able to pack or label when they moved out in March 2020. However, many students have reported that their labeled suitcases and boxes remained in the 13 trailers despite multiple attempts to retrieve them throughout the past year.

Zhang went to Wednesday’s event hoping to find loose, unlabeled items but was disheartened to find many personal belongings among the heaps by the trailers.

“Before going to the event, I was expecting to see stuff like lamps, bedsheets, cushions, storage boxes,” Zhang wrote in a statement to the Review. “I was excited to see ‘abandoned’ suitcases when I just arrived there. Then after opening a suitcase and finding an F1 legal document with a photocopy of someone’s passport, I started to question the validity of this event. Obviously some of the items are not abandoned. They belong to someone who might return to the campus at any time. Some of the suitcases had tags on, the handwritings were just a bit faint. Some other ones had stickers from airports on them, and it was easy to spot owners’ names.”

College third-year Raavi Asdar visited the trailers on Wednesday to search for friends’ belongings and found a chaotic pile of items spilling out in front of the 13 trailers in Willard Court.

“I think it was kind of awful because a lot of it was students’ belongings,” Asdar said. “Someone else described it as like, it’s a free store but with guilt. I tried to show up there right at 9 a.m. because I had close friends whose bikes had been put into storage, and I wanted to make sure to grab those before they went anywhere — those people are either off campus at the moment or [were] in class.”

Wilson says that students and local residents picked up most of the remaining items in the trailers, and that the rest will be donated.