On the Record with Deesha Philyaw, Author of The Secret Lives of Church Ladies 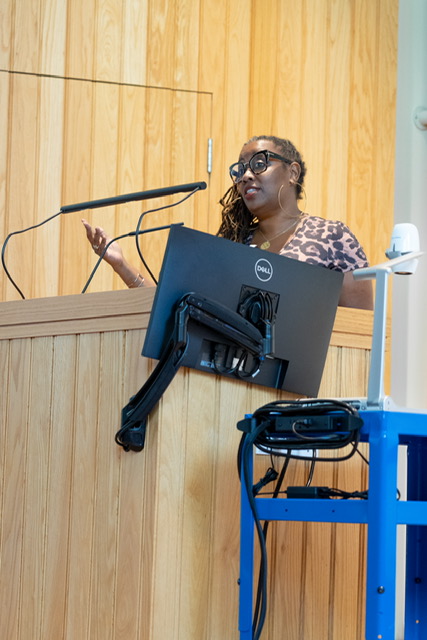 Author and columnist Deesha Philyaw came to campus on Monday to discuss her new collection of short stories, The Secret Lives of Church Ladies. Since its publication in September  2020, the collection has won the 2021 PEN/Faulkner Award for Fiction, the 2020 Story Prize for Fiction, and the 2020 Los Angeles Times Art Seidenbaum Award for First Fiction; it was also a 2020 finalist for the National Book Award, and is being adapted for television for HBO Max. The Secret Lives of Church Ladies is not really about the church, nor religion, but about the Black women who comprise its fabric, who thwart it, who find their power both within it and despite it.

What were some of your inspirations when you crafted these stories?

In general, my inspiration was rooted in nostalgia for the women of my youth growing up in Florida: women in the church and women outside of the church. But for each story, there were also other inspirations, like in “Jael.” Years ago, I discovered the biblical story of Jael, which involves a very gruesome murder. There’s plenty of violence in the Bible, but I was struck by the fact that in this story, the perpetrator of this very up-close-and-personal violence is a woman. That stuck with me. So fast-forward to when I’m building my collection of stories, and I start playing “What if…?” What if there was a 14-year-old Black girl named Jael? Who would burden her with that name and why? And what if she was a “bad seed” — one of my late mother’s favorite movies was The Bad Seed, which was about a little girl who was “born evil.” So what if my 14-year-old Jael was thought to be a bad seed? What does she do? I built the story around these questions.

There are a lot of stories about queer women in this anthology, and  a lot of them expereince family rejection. What would you want to say to your queer readers who have had this experience with their own communities? What would you say to those who enforce these harsh beliefs?

To those who call themselves Christians and use the Bible to condemn or reject their kids, I would remind them that according to the Bible, there’s nothing in Christ’s life or teachings that condemns or rejects queer people. Nothing. His central teachings and example are rooted in love and acceptance. And when he did condemn and become angry, it wasn’t at queer folks, it was at judgmental folks and thieves who were robbing the poor.

To the kids, I would remind them that sometimes parents and loved ones can come around. Know that you might have to take a step back to protect yourself, but you can leave that door open, if you feel it’s safe to do so.

For this collection, you essentially had to write in two languages. How did you approach  writing dialect like  African American Vernacular English?

I grew up in the South, but I haven’t lived there since 1989 when I went to Yale undergrad — that’s where I “lost” my accent. But my kids say that when they hear me on the phone, talking to my sisters or family from home, they hear it. My accent and AAVE are in my stories because that’s how I grew up speaking and still speak at times —  we code switch — so it was organic to how my characters spoke. I was raised by my mother and grandmother, and it’s my grandmother’s voice that you hear from my older characters. You want to write the way you would talk to the people you’re trying to reach. Fortunately, I had an editor who didn’t try and get me to change that or translate for white people.

It’s really an intimate, authentic look into the life of a Black woman.

Yes, exactly. I write for Black women, but anyone can access these stories. My focus was on Black women, sex, and the Black church, but after I finished the manuscript, I noticed how much mother-daughter stuff was in the stories. That was subconscious. My mother died in 2005, we had a rough relationship, but I was there with her those last six weeks of her in hospice, and we made things right. I thought I had put all of our stuff to bed, but apparently I still had things to work through, and this showed up in my stories.

Like queerness, infidelity is a topic that you have to write about if you’re going to write authentically about the Black church. The church is obsessed with sex and taboos because it’s obsessed with controlling women and women’s bodies, and controlling everyone’s sexuality with restrictions and binaries that don’t fit everyone, controlling who we are allowed to love.

People are uncomfortable with infidelity. One reader complained that I had infidelity in three of the nine stories in my collection (it’s actually in six of the stories), and that while one or two stories would be okay, three was too many. How weird and arbitrary! But what’s the saying? ‘We don’t see the world as it is, we see it as we are.’ We bring ourselves, our fears, likes, and dislikes to texts. I understand that the idea of infidelity makes some people uncomfortable, and that’s okay. My stories aren’t for everyone.

I noticed that in these situations, the power tends to flow towards the man.

Yes, the church’s hypocrisy allows presumably heterosexual male pastors — and other men — a pass from the rules and restrictions reserved for women and queer folks. They can cheat and say the devil made them do it. They can cheat and remain in the pulpit while the women they cheat with are vilified, and there’s no coming back from that. The women they cheat with live in the margins. In my story, “Instructions for Married Christian Husbands,” I pulled the other woman from the margins into the center; she makes the rules instead of following the rules set by the men she cheats with.

What do you think can be said about the church, church ladies, and platitudes?

Part of the reason I left the church in 2005 is that those simple answers and platitudes didn’t offer me any comfort after my mother, my father, and my grandmother all died that year; the church too often offers overly simplistic answers to complex questions. It offers inadequate responses to a complex human need. We rely on these simplistic answers and clichés, and it can stunt us. So when Tasheta says, “Your native tongue is cliché,” to her sister Renee, she’s commenting on these weak, rehearsed answers that Renee has for Tasheta’s challenges to her beliefs. In “Eula,” the two friends who are once-a-year lovers convince themselves that as long as they only do it once a year, God will forgive them. When you live by rules that can’t accommodate the fullness of your humanity, you start to contort those rules in ways that really don’t make sense, but it’s what you do to try to stay in God’s good graces.

What was it like for your family to send you to church when they didn’t go themselves?

My grandmother had kids and was never married, and my mother was eighteen and unmarried when she had me. So they didn’t feel welcome at church, but they wanted me to go.

They wanted you to have that.

Yes, exactly. It was like they felt like it was too late for them, they had “sinned,” but there was still hope for me, which makes me sad. They did start going to church when I was in college. I’m not sure what changed, but it seemed to give my mother some peace. My grandmother only went because my mom bugged her about it. She wasn’t trying to be a church lady!