The Return of Club Sports 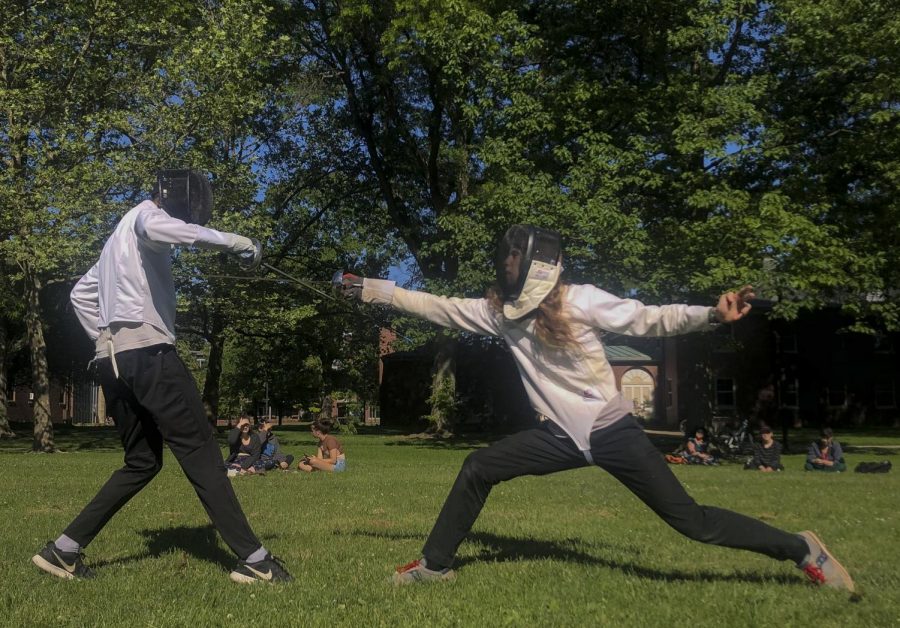 This past year, Oberlin’s club sports faced many of the same challenges that varsity sports teams had to conquer but with even fewer resources at their disposal. Recruiting new members, finding a safe way to practice, and working with a smaller roster were issues that all sports teams had to face but the club soccer team, ultimate Frisbee team, and fencing team have all managed to handle the issues COVID-19 brought on.

Conservatory rising fourth-year Oved Rico joined the club soccer team his first year at Oberlin and has been playing since he was eight years old.

“My experience has been nothing but great,” Rico said. “Especially being in the Conservatory, club soccer has been the perfect way to meet students in the College and connect with people outside of music.”

Fortunately for Rico, the club soccer team is quite large, so team members have been able to continue practices at a competitive level and maintain a full roster.

“We had practices indoors in the beginning of the semester in groups of ten at specified times for each group,” Rico said.

As the team was able to transition to outdoor play, they started to practice in one group multiple times a week.

“At first we were socially distanced, but then we were allowed full-contact towards the end of the semester,” Rico said.

Similarly, College third-year Elliott DeGrace on the men’s Ultimate Frisbee team, the Flying Horsecows, said that his team hasn’t had an issue with maintaining practices and attendance this semester.

“We’re all friends on the team and we missed seeing each other just as much as we missed playing Ultimate [Frisbee] together, so attendance has been great so far this semester,” DeGrace said.

On the other hand, College second-year Benjamin Eckols on the club fencing team says that this past year has been quite hard for the team, and, as a member of the team’s officer board, he was faced with tasks that proved rather challenging.

“We’ve mainly communicated through a combination of Discord and GroupMe, and, while we are still standing, it’s definitely been a big discussion as to how we are gonna bring back some of our members,” Eckols said. “As an officer, I’d say we handled things as best we could, but it’s definitely been rough trying to keep everything running for a year now.”

FenceCo, which is the primary recruitment into the club, was limited this past year because of ObieSafe restrictions.

“Some of our new people are some of our most dedicated,” Eckols said.

“I’m proud that the club is still standing; lots of sports clubs got forced into hibernation by restrictions.”

When COVID-19 restrictions were in-place in the spring, the Horsecows practiced with masks and altered the rules of the game to make things safer. For example, athletes had to stand further away from the people they were assigned to guard during play.

“We did temperature checks before practices and sanitized discs and checked ObieSafe status as well,” DeGrace said. “Currently, the whole team is vaccinated so we’ve been easing back into normal practices, trying to avoid injury and overexertion in the process.”

Despite the lack of socialization on campus in the fall and spring semesters, DeGrace said that his team did not have an issue in recruiting first-year students to join this past year. Their recruitment strategy has been mostly by word of mouth, and DeGrace says the leadership of the Horsecows tried to focus on retaining current members and bettering the team as a whole.

“The first-years that joined our team this year are wonderful and really wanted to play ultimate,” he said. “I was so impressed by their enthusiasm and the energy they brought to the Horsecows despite everything else going on in the world.”

Rico says that even with the COVID-19 restrictions the club soccer team was able to bring in new players. He believes this was aided by the three semester plan.

“With the freshmen being here in the fall and spring, word was able to get out to them about practices and the club,” he said.

In contrast, when students were sent home in March 2020, Rico said the team only had a few virtual events organized for people off-campus.

“Most of our interactions came through practices, and team dinner after practices and other social events through the school year,” he said.

Still, the time away was not time wasted. DeGrace said that while the Horsecows were home they took time to look at the racial history of the team and the sport as a whole.

“As a predominantly white team in an overwhelmingly white sport we realized that we were part of the problem, and decided to begin the work amongst ourselves to begin changing that,” he said.

The team held weekly meetings throughout the past two semesters focusing on racial equity and privilege in ultimate Frisbee, as well as the history of their team and the history of Oberlin. DeGrace believes the work they have done is a good start, but they plan on making these discussions an integral part of what being a member of the Horsecows means. He looks forward to continuing their work this semester both in dialogues with each other and through Multicultural Resource Center workshops.

Eckols hopes that, as things gradually return to “normal,” recruitment will become easier for the fencing team.

“By the end of the fall, hopefully we will have lots of new people to pass the torch to. That will lead to big improvement; from there, we can handle everything else,” said Eckols.

According to DeGrace, playing on a club sports team has been one of his best Oberlin experiences.

“The informality of the club sport allows for flexibility in the team and allows the team to lead itself,” he said. “We have some really great people working every day to make sure that practices and other events run smoothly.”

While he was looking forward to many of the COVID-19 restrictions being lifted, DeGrace says that he was especially excited to play Frisbee with his friends again.

“The return of club sports means we can return to a team we all love so much,” he said.