Juneteenth 2021 Brings More Food Trucks to Oberlin, City Council and OCIC Arrange for Them to Stay 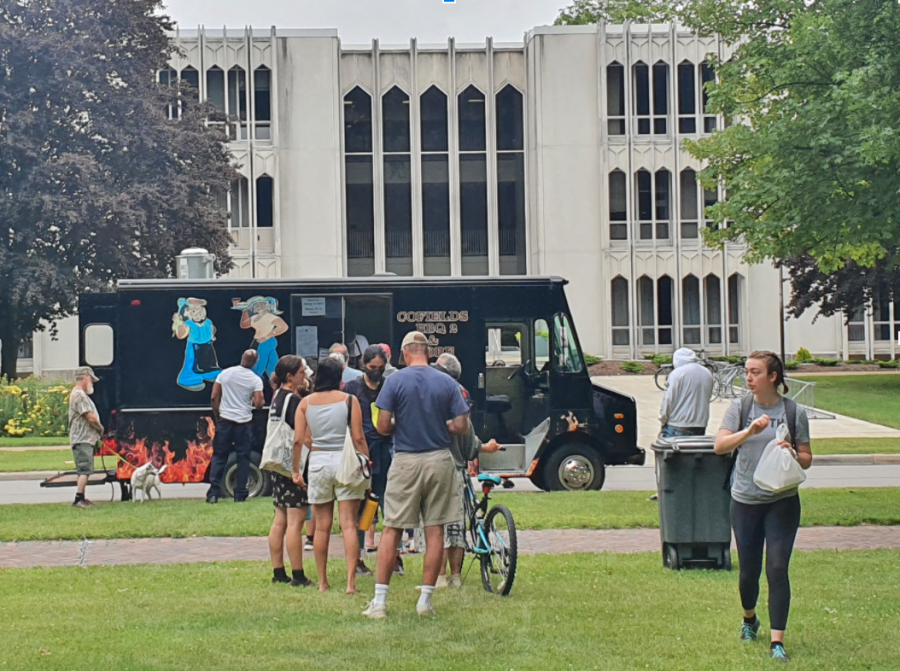 Community members and students gather around the Cofield’s food truck.

After six years of heavily regulating food trucks within city limits, Oberlin City Council passed changes to food truck regulations this Monday. Since 2015, food trucks have not been allowed to operate on the street or in public parks, effectively eliminating food trucks in Oberlin’s downtown. Now trucks can park in more permanent locations, and City Council has introduced an easier permitting process. The change occurred as the Oberlin Community observed Juneteenth, welcoming several mobile food vendors to a celebration of the holiday at Tappan Square.

Sylvan Long, vice chair of the Oberlin Community Improvement Corporation — a group made up of local residents, businesses, and government representatives — estimates that the changes could take effect within the next two weeks. The shift promises to be an opportunity for food stands that struggled during COVID-19.

Since January, the OCIC has worked with City Council to advocate for permanent locations for food trucks and create an easier permitting process. The existing process was inconvenient and often limited food trucks to selling only at special events.

“I was inspired to bring the recommended ordinance changes to my fellow OCIC members after learning about local entrepreneurs who had already started food truck businesses or wanted to start them in Oberlin,” Long wrote in an email to the Review. “I learned about the challenges of operating a food truck under the current ordinance, which makes it difficult for local entrepreneurs to succeed because they can’t operate here on a regular basis unless they jump through several burdensome regulatory hoops.”

The original ordinance allowed food trucks for special events but was limited because of concerns over competition. However, Long believes that the larger number of food vendors in town will bring in more customers for everyone. It will also be an opportunity for economic growth within the town.

Even before 1996, when Oberlin began to celebrate Juneteenth, food was an important part of Oberlin’s Independence Day celebrations. Valerie Lawson, chairwoman of the 2021 Juneteenth Executive Board, said that over Heritage Days, an extended version of July Fourth and precursor to Oberlin’s Juneteenth Celebration Festival, food vendors used to cover a substantial swath of Tappan Square — from the bandstand to the western edge and up to the northern third of the square.

“It’s like a competition down here with food,” Lawson said. “You know when I was little — man, if you could just imagine. It wasn’t Juneteenth then though. It was called Heritage Days, and I’m telling you … all the way down, all the way around, all the way up … was vendors. I know times change, people die, things go on, but we still try to make it positive learning and eventful and fun for everybody.”

While celebrations were limited this year because of COVID-19, residents were still able to celebrate with a parade, cemetery ceremony, and a number of mobile food vendors. Along Tappan’s western edge, locals and College students converged on Cofield’s BBQ and More, The Arb at Tappan Square, and Gee Gee’s Kettle Corn. Steel Magnolia was unable to send its food truck.

The vendors appreciated the support of the event. After opening the restaurant just before a statewide spike in new COVID-19 cases, Morgan K. Smith, General Manager of The Arb at Tappan Square, called Juneteenth the “best day ever” in terms of business and spirit.

“Just being able to see people gathering downtown and … then having different vendors come out and sell their items, it feels like we’re a community again,” Smith said.

With College students and town residents flocking to the food this weekend, vendors hope that the ordinance changes will open new opportunities for their businesses and the city.

“I believe that having more food trucks will help make Oberlin more of a food destination than it is now, which benefits our community and all of our businesses by bringing in more visitors,” Long wrote. “We already have great local restaurants that bring in visitors, and food trucks would add to that. To mix metaphors a bit, I believe this is not a zero-sum game but a case where a rising tide floats all boats.”

As a potential consumer, Lawson was also excited at the prospect of having permanent food trucks.

“That would be real cool, because sometimes you want change,” Lawson said. “The food truck always bringing change. I don’t know too many food trucks you’re going to walk up to and get the same thing. Like Cofield’s, she got ribs, you know, she got choices. Fish, ribs, those Polish boys, different kinds of fish, her soul roles, you just, you just never know. And I think at a food truck, you never know what you’re going to walk up to.”

Smith is also looking forward to the changes and believes they are long overdue.

“The food truck trend has been one that is increasing in different cities throughout the world over the years. And I think it’s time that Oberlin allows it … We deserve it.”

Despite concerns that the changes could sully the City’s small-town feeling, Smith argues Oberlin will still remain that special small town she remembers growing up in.

“I think the beauty of Oberlin is that it will keep that small-town feeling no matter how modern it gets, no matter who’s here and who’s not, no matter what season, no matter [if you’re] in the middle of a pandemic. You’re going to go to Oberlin and it’s going to feel the exact same. People come here after not being here for 50 years and say, ‘Oh my God! Nothing’s changed.’”