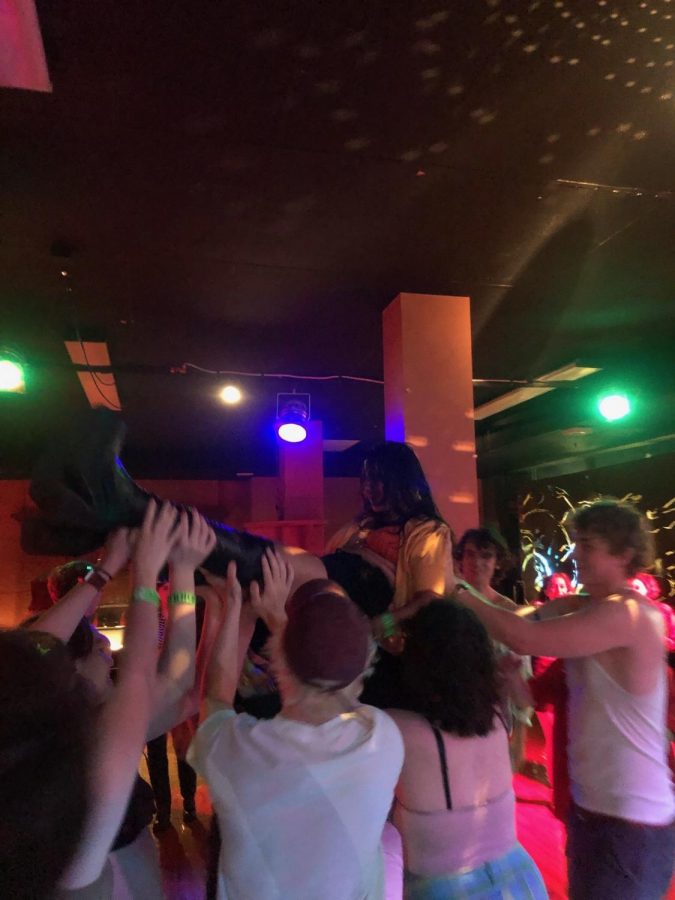 This past Wednesday, students on campus for the summer semester enjoyed their first indoor Splitchers at the Dionysus Disco since the beginning of the COVID-19 pandemic 16 months ago. College second-years Tali Braun and Emelia Duserick co-hosted the event, curated the playlist, and chose the theme — Barbies vs. Bratz — and attendees suited up in either Barbie Dream pinks and sparkles or Bratz Y2K chunky heels and low-rise jeans.

Although the  Sprinklerz outdoor event this past April, meant to mimic a regular Splitchers but outside for COVID safety, was a roaring success, most second-years were not on campus and third-years missed the real experience: dancing, drinking, and sweating in the basement of Wilder Hall. With the return of traditional Splitchers this week, students rejoiced in their ability to once again participate in the original form of a beloved Oberlin tradition.

“It was exciting to go back because it had been so long — I hadn’t been to the ’Sco in over a year and a half,” said rising College fourth-year Aniella Day. “So it was exciting to just be back in that space.”

The College lifted most of its ObieSafe guidelines a month ago, but in preparation for Splitchers, the ’Sco implemented a series of safety measures in order to protect the students and staff in attendance. Capacity was limited to 100 students, and students who left the ’Sco during the event were asked to remove their wristbands and wait in line upon reentry.

“We discouraged people [from] getting wristbands and just leaving so that we could let as many people in as possible — we didn’t want people hogging wristbands,” said Jesse Pearlman, College third-year and ’Sco manager. “We got a hundred [people] in and then we stopped — we didn’t let anybody else in. Then, after a while, people would leave and they’d give us their wristbands, and after we got enough back, we would let a few more in. At 10:50 or something, we were able to let 35 more people in, and it kind of continued like that throughout the night.”

Even with the new safety guidelines, students were able to let loose and get down just like old times. Like most Splitchers, the night was slow to start, but by 10 p.m. the energy had picked up significantly. Students even reported two instances of crowd-surfing — a practice previously uncommon at Splitchers.

The ’Sco may not have been as packed as pre-COVID-19 Splitchers, but the energy definitely breached its normal voltage. The good vibes can be partially accredited to the DJs’ attention and commitment to the theme. Braun and Duserick had been waiting for their moment to premiere their ’Sco vision since pre-COVID-19 times.

“My cohost and I originally planned not to do Splitchers, but just a ’Sco night event on Pi Day of 2020 — so the weekend we all got sent home,” Braun said. “We weren’t able to pursue the event because of COVID, but we still had the playlist, we still had the poster. So when summer arrived, [and] we’d heard that the ’Sco was opening up again, we immediately sent in our application to work Splitchers this time and step up.”

Duserick echoed Braun’s excitement and spoke on the prolonged meditation behind the playlist’s curation. She had been taking notes on both the successes and shortcomings of previous Splitchers, and knew that, above all, she wanted to give the people what they wanted.

“I feel like a lot of times, there’s not enough crowd pleasers played in the ’Sco,” Duserick said. “Or there’s crowd pleasers played, but … it’s always like the ‘Hoedown Throwdown,’ which is fine, it’s ironic and fun. But you also have to get the people going. You have to play ‘Twerkulator,’ you’ve got to hear ‘Thot Shit.’ We had a big collaborative playlist. It was like six hours, but then Courtney [Brown, ’Sco manager] was like, you guys only need three hours. So we had to do a lot of editing, a lot of cutting down … we pared it down to only the bangers.”

The event was mostly populated with second-years. For many students — even the most enthusiastic ones — Splitchers’ limited capacity was a bit discouraging. Natalie Korzh, a College third-year and die-hard Splitchers attendee, decided not to go once she found out about the 100-person cap.

“One hundred people didn’t feel large enough especially if the people that got in didn’t happen to be people I knew,” Korzh wrote in a message to the Review.

Along with Korzh, plenty of third-year students — many of whom are newly 21 — passed up vaccinated Splitchers for Long Island Night at The Feve. Long Island Night has historically served as a Splitchers pregame, but after last call on Wednesday night, students instead migrated toward an off-campus party in a house on South Professor Street.

According to Pearlman, from here on out, Splitchers will once again be a weekly occurrence. As general feelings of safety increase on-campus, the ’Sco will reevaluate its capacity restrictions.

“We’re doing that 100 capacity until the end of June,” Pearlman said. “And then hopefully for July, we’ll go up to 200. Depending on how that goes in terms of safety and how people feel, we’re hoping to get back to full capacity by August.”

As of right now, the ’Sco can only open for specific events and programming. With the help of ambitious student organizing, ’Sco management hopes to bring back other classic programs like Professor Beers and Trivia Night.

“We actually encourage anyone who’s interested in booking events of any kind [to] please fill out a ’Sco request [on the ’Sco’s website],” Pearlman said. “We just love to have the space available to students.”