The Role of Food in Oberlin’s Juneteenth Celebrations 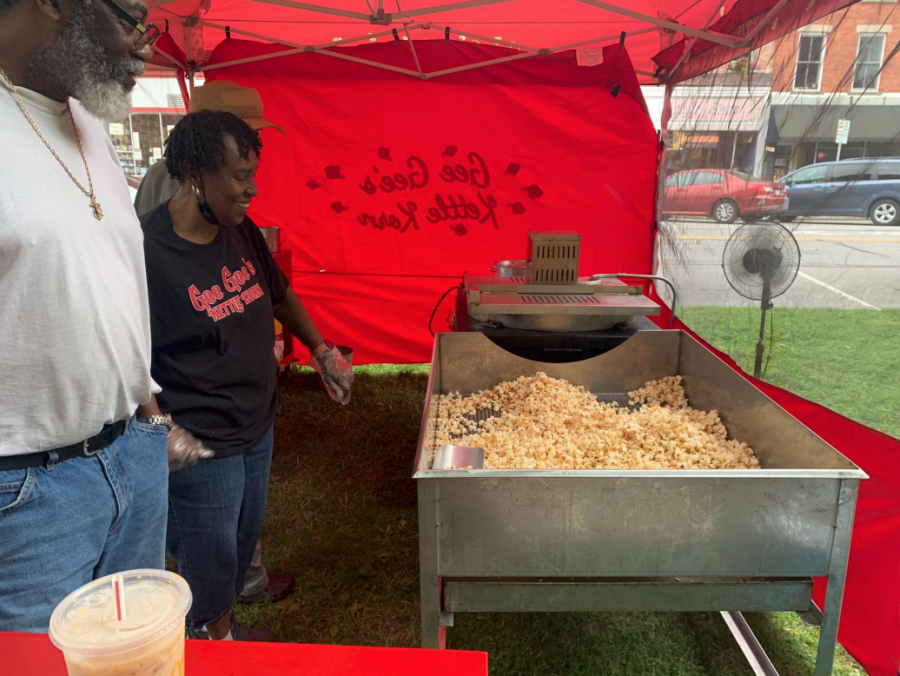 This past Saturday the City of Oberlin’s 2021 Juneteenth Celebration Festival saw Tappan Square lined with vendors feeding the town on kettle corn, barbeque, and more. A few vendors spoke on the personal significance of their food, Juneteenth, and the relationship between the two.

Through the years, food has been a central feature of celebration for event organizers, vendors, and attendees alike, and Juneteenth celebrations see food acting as a means of connection, education, and comfort. Food truck owners stock their stations with soul ingredients that remind them of home, neighbors purchase meals for one another, children get their hands sticky with sweets, and strangers bond while waiting in line, eyeing the same dishes.

Assistant Dean of Students Monique Burgdorf and Assistant Vice President for Institutional Research and Planning Ross Peacock enjoyed the festivities from a bench in Tappan, curled over a spread of mac and cheese, fries, and a sandwich from Cofield’s BBQ & More.

Peacock recalled an earlier interaction, when a passing stranger caught the scent of their meals and asked where they could get some of their own.

“It’s an icebreaker,” he said. “If we were just sitting here looking, it would be kind of weird, but if you’re eating, you’re engaging somehow.”

Sitting on the Memorial Arch is 20-year-old Patrick Knowles, who was born and raised in Oberlin and has attended  many Juneteenth celebrations throughout the years. We asked him how this event compared to other years’ celebrations.

“For the circumstances that we’ve had in the past year, it went really well and I’m glad that everyone could make it out,” Knowles said. “With most events, I do look forward to the food but [that’s] not to say that’s the only thing that I focus on. I also want to focus on what the event is about and what it means for the people attending and the people involved in it.”

Juneteenth — now officially a federal holiday — is a day of memory, grief, and celebration of Black emancipation in the United States. In 2004, the Oberlin City Council established Juneteenth as an officially recognized day of commemoration. Since then, the City has held a series of events each year, ranging from student-organized plays and block parties to parades down College Street and Maafa memorials in Westwood Cemetery.

“Food is actually a really good way to get into culture and everything, [but] there aren’t too many cultural foods specifically tied to the event, which is a shame,” Knowles said.

Other food vendors at the Juneteenth event included Otterbacher Bros Concessions and Gee Gee’s Kettle Korn, but for most of the day, event-goers flocked to Cofield’s for barbeque ribs,peach cobbler, sweet potato pies, and more.

After a morning of preparation, Virginia and Lisa from Cofield’s BBQ spoke to us about their long-standing relationship with Oberlin Juneteenth — they have attended over a decade of celebrations. Virginia beamed as she recalled her favorite memories of the holiday and the importance of the learning experience it facilitates for her grandchildren.

“Oberlin is a good atmosphere for you to bring your kids,” Virginia said.

For Virginia, food makes the celebration festive. Both Virginia and Lisa commented on the uniqueness and diversity of Oberlin. They laughed while emphasizing the amount of macaroni and cheese they sell — a food they consider a staple of every Juneteenth celebration.

Down the road are longtime Oberlin residents Manuel Coleman and Barbara Coleman, who have been working for Gee Gee’s Kettle Korn stand and serving community events for about four years now. They have been attending Oberlin’s Juneteenth celebration for over 20 years.

“Generally, a lot of the foods that they usually had [on] Juneteenth used to be soul foods — like ribs, chicken, wings, and barbeque,” Barbara said. “But it can be anything now because the culture has changed. [Cultural] foods aren’t necessary, you know, because everybody’s eating everything.”

Unlike Virginia and Lisa from Cofield’s BBQ, the Colemans don’t return to specific foods when celebrating Juneteenth. To them, food is not the most important part of the holiday.

She spoke on the necessity of keeping Juneteenth alive through generations.

“The new generation coming up, they may not remember,” she said. “They may not know anything about [Juneteenth] unless they get it from their grandmother or family member.”

Running a snack and candy booth is 12-year-old Precious, her three little sisters, and their mother. “Juneteenth is a day of gratefulness,” Precious said, speaking on how this day serves to commemorate African Americans who are struggling and feel that all hope is lost, and to remind them of the strength they hold.

Precious believes in food’s ability to bring people out to have fun and reach deeper into their community. When asked about her favorite Juneteenth staple foods, she laughed and quickly said “Candy! It has to be sweet and it has to be good.”