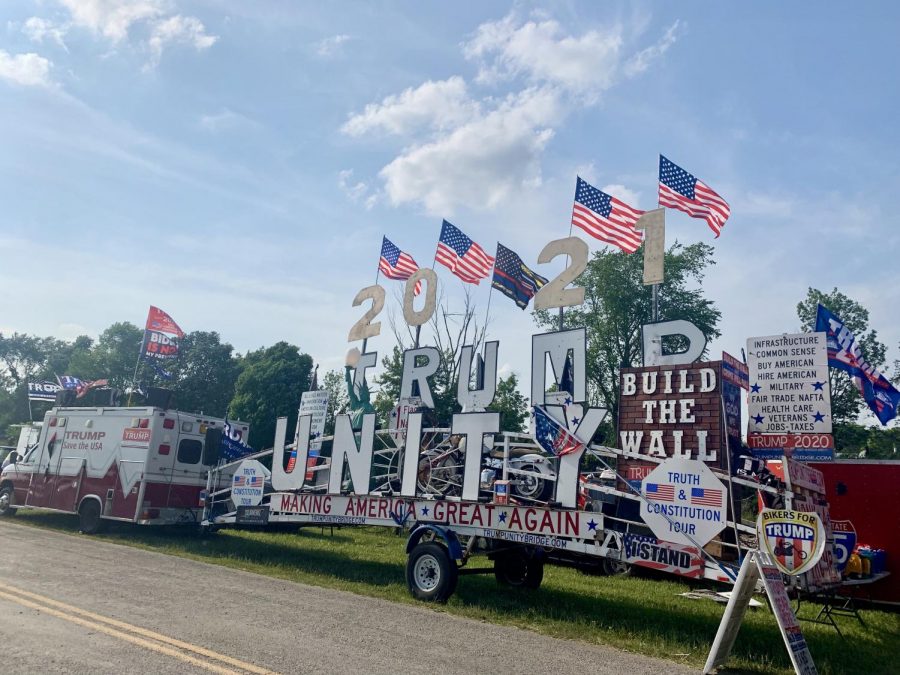 Motorcyclists for Trump arrived at the rally with a large “Trump Unity” sign.

After a six-month break from hosting public rallies since the Jan. 6 insurrection, former president Donald Trump returned for his first post-presidential rally at the Lorain County Fairgrounds last Saturday. According to the Trump campaign, over 20,000 supporters came from across the country to hear the former president speak. Many of Trump’s supporters attending the event continue to view him as the leader of the U.S., and believe the election was stolen. Speakers at the rally included Representatives Marjorie Taylor Greene and Jim Jordan, as well as former White House aide and current congressional candidate Max Miller.

Trump’s Lorain County rally was the first of a series in his “Save America” campaign. The tour is part of Trump’s 2022 strategy to challenge Republican incumbent candidates who either voted for his impeachment or would not support his effort to overturn election results in key battleground states.

Trump was in Northeast Ohio campaigning for Miller, who is challenging Anthony Gonzalez, the Republican representative for Ohio Congressional District 16. In 2021, Gonzalez was one of 10 House Republicans who voted to impeach Trump after the deadly Jan. 6 Capitol riot.

Still, most of Trump’s speech did not focus on Miller’s candidacy or his campaign. Instead, Trump discussed false claims about the 2020 election results and critical race theory, and hinted at a potential 2024 presidential run.

“We won the election twice,” Trump said. “And it’s possible we’ll have to win it a third time. It’s possible.”

Supporters were also not focused on the down-ballot congressional races. Instead, most attendees sported Trump 2024 gear as they convened at the Lorain County Fairgrounds, excited to catch a glimpse of the former president at his first rally held in over six months.

“[I’m at the rally] because it was close, and the election was stolen,” Corey Evans from Mansfield, OH said. “I’m just here to support. … I think they need to re-look at the election and see that it wasn’t fair and it needs to be turned around.”

For many attendees, going to Trump events is a way of life — some had been to upwards of 100 Trump rallies in the last five years. This was especially true for many vendors who set up at the Fairgrounds to sell everything from pro-Trump gear, to anti-Biden T-shirts, to informational pens.

Justin, a vendor selling Trump merchandise, drove from North Carolina and had been at the Fairgrounds since 4 p.m. the previous day.

“It’s been a really good turnout and people have been super excited,” he said. “They know [Trump won] 80 million votes …  everybody knows. We all know.”

In reality, Trump won a little over 74 million votes and lost both the popular vote and Electoral College to current President Joe Biden. Trump’s claims of election fraud in the 2020 election have failed to stand up to legal muster in over 60 lawsuits related to the issue.

Many supporters coming from more liberal parts of the country also felt relieved to be surrounded by like-minded people. Lindsey, a local police officer originally from Florida, reunited with members of her family from across the country.

“I haven’t been to any Trump rallies — I live in Portland [OR],” Lindsey’s relative said. “Nothing out there except antifa.”

Lindsey and her family were surprised by the degree of support for the possibility of Trump’s 2024 bid for president.

Lori, a Trump supporter and QAnon follower from West Seneca, NY, believes that Trump will soon become the king of the world. She spoke about how she thinks the former president communicates coded messages in his speeches.

“He’s giving communications that people will pick up on,” she said. “I’ll be able to go home and some brilliant ‘anons’ … [will] decipher the communications that he’s doing right now. I’ll go to the [QAnon] people that I listen to and watch and they’ll say, ‘Oh, do you remember when he said, ‘blah, blah, blah?’ This is what this meant.’ He’s giving us little signals to communicate.”

“Oberlin, politically, is very divided,” Nary said. “It’s divided by the town and the College, it’s divided politically. I think the press wants us to be divided among ourselves — by race, by religion. If we all united, we wouldn’t be divided at all — things would be so much easier. … If the government can keep us separated and doing our own thing, we’re not going to get anywhere. People say a lot of things about Trump, but I think he really is trying to unite us.”

Nary also spoke about how his personal politics have changed over the years.

“I’ve been a registered Democrat most of my life — up until 2016,” Nary said. “Now there’s no way I can associate with the Democratic party. They’ve changed. … It used to be, if you were a working man — like I was until I was disabled — you were for the Democrats because the Democrats looked out for the working man. Not anymore. They’re only looking out for themselves. … They just want to stay in power.”

By contrast, the statement released by the Ohio Democratic Party in response to last weekend’s rally highlighted that unity is at the center of their party’s mission.

“While Republicans are focused on the divisions of the past, Ohio Democrats are focused on building back better in Ohio and continuing the progress we’ve made in our state under the leadership of President Biden and Ohio Democrats,” said Matt Keyes, a spokesperson for the Ohio Democratic Party. “Thanks to the American Rescue Plan and Democratic leadership, Ohioans are vaccinated, businesses are opening back up, and families will be able to safely gather in-person over the Fourth of July holiday. That’s a significant shift from one year ago today.”