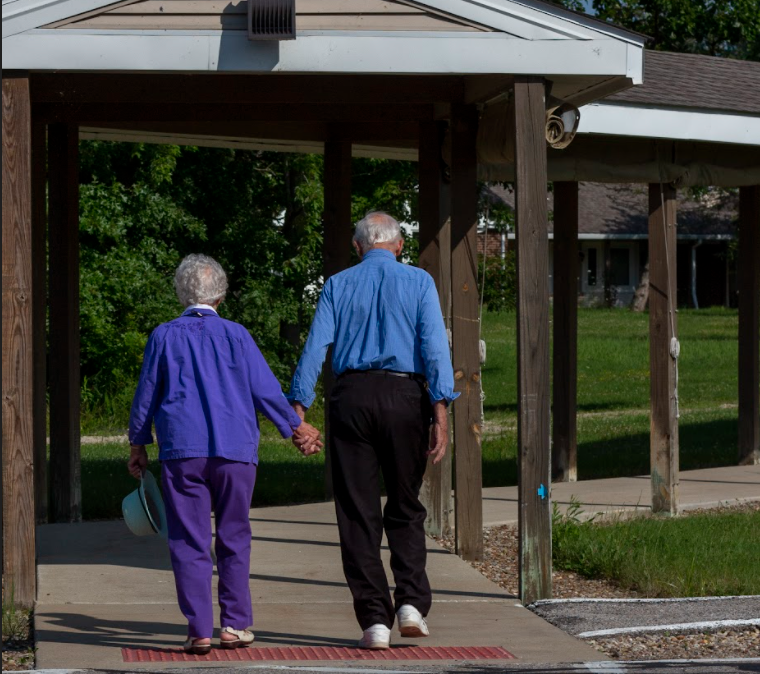 Kendal at Oberlin reduced its COVID-19 health restrictions at the beginning of July amid widespread vaccination at the facility.

After weeks of declining cases countywide, residents of Kendal at Oberlin relaxed most of their COVID-19 restrictions on July 2. Residents can now move around the main building without masks, vaccinated guests can visit residents in their living area without masks, and residents are allowed to leave Kendal and visit family and friends. Throughout the pandemic, only one resident in the Kendal Residential Care Facility tested positive for COVID-19.

While some restrictions still remain — masks are required in assisted living areas and health and travel screenings are required for all visitors — residents have embraced their newfound freedom.

When resident Ann Fuller was finally able to leave the retirement community after months of confinement due to COVID-19, she celebrated in an unusual way.

“The first thing I did when things opened up at all is that I drove down every single street in Oberlin to get reconnected,” Fuller said.

After living in Oberlin for 50 years, Fuller had moved into Kendal just days before COVID-19 restrictions began and spent the majority of the pandemic within the walls of the senior living facility.

Despite the less than auspicious start to her experience in independent senior living, Fuller still felt proud of the work Kendal did to protect its residents from COVID-19.

At the end of 2020, Kendal began to lift restrictions, first by allowing residents to pod with one another in small groups. After all residents were fully vaccinated, residents formed larger pods. Travel, with a two-week quarantine on each end, was allowed.

Barbara Thomas, CEO of Kendal, attributes Kendal’s success during COVID-19 to a combined science- and community-based approach. According to Thomas, every decision was made by consulting the latest scientific research. To ensure that residents also felt they had a say in restrictions, she devised a leadership group — the New Normal Committee — made up of residents, staff, scientists, physicians, and nurses to develop restrictions together.

For Thomas, involving the community of Kendal in decision-making enabled residents to understand why the restrictions were happening and allowed Thomas to hear their concerns.

“I couldn’t possibly know everything I need to know without them at my side,” Thomas said. “We needed each other.”

According to Quinn Barbee, a maintenance worker at Kendal, residents were happy to comply with guidelines.

“Our residents would follow the protocols to the T,” Barbee said. “You’re talking about six feet — they may be eight feet away. Everybody would remind each other if a mask slipped, ‘Your mask! Your mask!’ Both staff and residents followed the protocols completely. ”

Joyce Lemonedes, a new resident, agrees, saying that the whole community was very compliant in following restrictions, practicing extra caution even after restrictions were lifted.

“I go to an exercise class three times a week,” Lemonedes said. “Even now, when we don’t have to continue wearing masks, many of us do.”

Fuller also mentioned a feeling of trepidation with lifted restrictions, saying that she still hasn’t gone to the dining hall at Kendal despite its opening.

“It’s been tough being in a crowd again,” Fuller said. “You develop such defenses against groups.”

Still, while COVID-19 presented many challenges to the residents, there were some silver linings. Both Thomas and Fuller mentioned that technology really helped residents feel connected to the outside world. Events, such as concerts, plays, and lectures, were in some ways enhanced over Zoom.

“Our residents were able to see and hear the actor or speaker up close,” said Thomas. “Instead of having to go to a crowded auditorium, they could watch these programs from their living room.”

Even with modern technology offering some solace in isolation, Barbee remembers how hard isolation was on the residents, particularly those in the most restricted part of the care center.

According to Barbee, he would occasionally wheel a resident around campus, just to give them some fresh air. He said that many residents would just stay in their rooms or walk up and down the hallway during the pandemic.

When Kendal lifted restrictions, Barbee said that it was uplifting to see those same residents who spent months alone in the Stephens Care Center finally get the chance to leave.

“You could see a difference in their body language; they were rejuvenated,” Barbee said. “They’re so happy to be able to go into the dining area again and eat with everyone.”

Lemonedes describes a similar feeling of excitement and community.

“This place is full of interesting people,” she said. “Once I was able to be out with them or go out to their cottages, it opened up an absolute new world. There are many activities here, interest groups. I have no problem imagining a future here. It was like freedom again.”