FAVA: Revitalizing the Arts in Oberlin 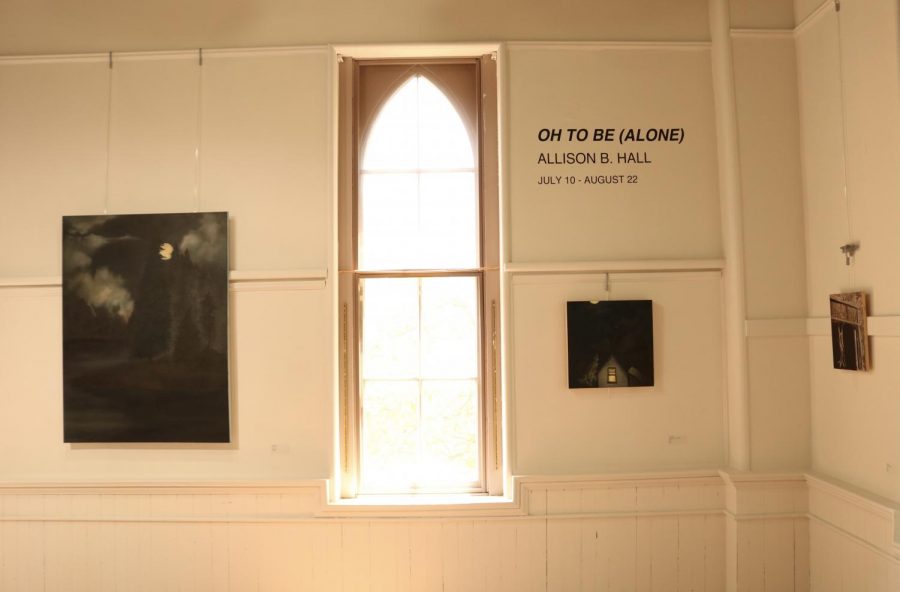 Firelands Association for the Visual Arts, an independent non-profit organization nestled in brick and foliage along South Main Street, opened its doors for two days this past weekend to premier its first in-person exhibition since the pandemic started. The exhibition, Oh To Be (Alone), featured a collection of paintings and collages by artist Allison Hall in the FAVA’s South Gallery.

Artist, writer, and FAVA Executive Director Kathleen Jackson was a key player in expediting the gallery’s reopening, though “reopening” may not be exactly the word she would use. During the pandemic FAVA worked to find new ways to fulfill their mission to increase public engagement with the arts, premiering new exhibitions virtually and distributing art materials — ranging from jewelry tools to pottery wheels — via loaner system.

“It’s more of a shift than it is a restart,” she said. “For right now we’re just trying to get moving again.”

According to Jackson, FAVA staff weren’t sure what the gallery opening was going to look like. Pre-pandemic, gallery openings meant shrimp cocktails and mingling with the artists between bites of Ritz-and-cheese charcuterie, champagne flute of bubbly water in hand. Though this past weekend’s opening was not rendered with the same level of fanfare, plenty of excitement was expressed by the artist and patrons alike.

Hall has been involved with FAVA since before the pandemic. A graduate of the Maryland Institute College of Art and an Ohio native, Hall holds a sweet spot for FAVA.

“I love working at FAVA,” she said. “I teach at a handful of art institutions and this is by far my favorite.”

Hall was initially expecting the exhibition to be only virtual; the decision to bring it to the gallery for in-person viewing happened just two weeks before the opening. This switch struck a chord for Hall — this is her first in-person show in over a year.

“It just feels good to have it up on the walls,” Hall said. “And to have other people experiencing art in-person is exciting.”

Hall’s exhibition, Oh To Be (Alone), is the antithesis of the in-person experience Hall is currently relishing, both in title and content. Her works reckon with the many dualities of family life in isolation.

“This one is something that I made right at the beginning of quarantine and the pandemic,” Hall said in reference to one of her pieces, a collaged pillar erected in the center of the gallery space. “It was responding to the idea of being inside, being quarantined, being alone, feeling alone, but also at the same time being quarantined with a toddler, with your family, and how much overstimulation there is. … Alone time almost never happened unless I made it. Making art was one of the only ways I could escape to be on my own.”

“It’s really fun to hear Allison’s personal take and see her creations,” said Chloe Lai, a gallery docent at FAVA and a third-year student in the College. She worked in FAVA’s art classrooms before the pandemic and is excited for the organization’s imminent return to teaching camps and classes in-person.

“I want to encourage people to keep embracing the creativity they found during the pandemic,” she said. “I think the arts can help us to shift our focus and change our lives for the better. I think creating is such an important part of our humanity.”

Beyond her work to keep FAVA flourishing, Jackson has many plans to ensure the space’s safety and return to programming with some COVID-safe modification. The building already has a new air filtration system to maintain airflow, and FAVA is planning for an August summer camp for kids, with shortened days and fewer students to allow for social distancing.

“We’re going to be following CDC guidance on safety protocols,” she said. “We’re asking unvaccinated people over the age of two to wear masks on the property. … We’ve got safety in mind, but we are excited to be opening back up in person, particularly for classes.”

Though the exhibit was only open for in-person viewing on the 17th and 18th, Hall’s collection can be viewed online on the FAVA’s website. FAVA’s Juried Biennial Photography Show opens on August 14, and FAVA is offering a slew of workshops, camps, and photo walks throughout August.