Solarity and Drag Ball Merge into One ‘Solstice’ Event 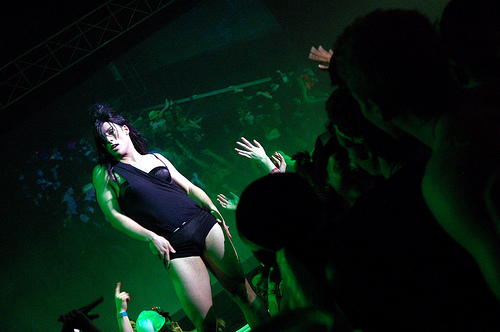 Ma'ayan from the Review Archives. Courtesy of Mads Olsen

Last October, College third-year and chair of Solarity, Perry Mayo, approached Kari Allen, College second-year and co-chair of the Drag Ball committee, about putting on a joint event. Both Mayo and Allen agreed that an amalgamation of two of Oberlin’s most beloved social traditions would likely gratify the long-unsatiated appetites of the socially-deprived Oberlin student body.

“Perry reached out to me and was like, ‘Because it’s summer semester and neither of us were able to have events this year, would you like to merge the event for the summer?’” Allen said. “I said, ‘Yes, of course! I think that would be easier for us to have a larger group of people to be able to do things’ — especially because at the time that we were setting things up, [COVID-19] restrictions had not yet been completely lifted. So we figured that it would be easier to have a larger group of people helping with a [COVID-19] limited event.”

With COVID-19 restrictions significantly diminished, the event is open to all — granted that they watch a 30-minute Bystander Training video and fill out the accompanying entrance form. The form asks basic questions on safe drug use, consent, and etiquette in attending an LGBTQ+ event. According to Vanessa Baker, College second-year and trainer for the Preventing and Responding to Sexual Misconduct program, the training was a collaborative effort from many different groups on campus, including Students for Sensible Drug Policy and PRSM. The video also includes a brief history of ballroom culture.

The performers featured at the event were all chosen by the organizers of Drag Ball. The organizers of Solarity, who have experience with large-scale events, focused on production. Riyad Alam, College second-year and co-chair and treasurer of Drag Ball, helped choose the drag queens and addressed concerns that Solarity’s status as a large-scale musical event would overshadow the drag queens’ performances.

“I was a little wary about making sure that, as Drag Ball, we are highlighting drag queens, so that they don’t feel like they’re kind of just like a warm up to our musical artist,” he said. “Knowing that Drag Ball does usually have a musical artist and we do give them equal space … I feel like we’ve done a really great job of making sure that we are highlighting our musical guest Flo Milli, but also we have drag queens.”

According to Allen, it was important to represent drag culture, not only through the starpower of the drag queens from RuPaul’s Drag Race — Jaidynn Diore Fierce, Ra’Jah O’Hara, A’keria Chanel Davenport — but also by featuring smaller, local drag queens who may not reach nor desire the fame of TV stardom, but who still utilize drag as an important form of expression and identity. Queens from Cleveland Burlesque — Bella Sin, Peach Fuzz, and Cece Noir — will be featured alongside Flo Milli and the queens from RuPaul’s Drag Race.

Allen elaborated on the decision to choose queens that were representative of the history and roots of drag ball culture.

“We specifically wanted to have Black queens and queens of color coming to highlight that this was something created by Black people, people of color — it was a self-expression for Black LGBTQ+ people,” Allen said. “We just really wanted to go back to the roots … because recently a lot of white queens have been gaining a lot of traction. And that’s really cool. It’s obviously a space for them as well, but we really wanted to go back and highlight the fact that Black queens and Black queer people are so important to the movement.”

After nearly a year of planning, Mayo expressed their excitement for the event and hopes that it will provide students with a respite from work and responsibility, especially during an unusual and challenging summer semester.

“I hope it’s what people dream it is,” they said. “I know there’s a lot of pent up excitement ’cause like I’m personally so excited. I haven’t been into space like this for over a year and a half. And I just know that it’s a summer semester — kind of a weird time too. I hope that it’ll just be the unifying thing that everyone’s been looking for.”

For those who wish to attend, please watch the required Bystander Training Workshop video and fill out the Solstice entrance form.