In The Locker Room with V Dagnino, Powerhouse Behind the Plate 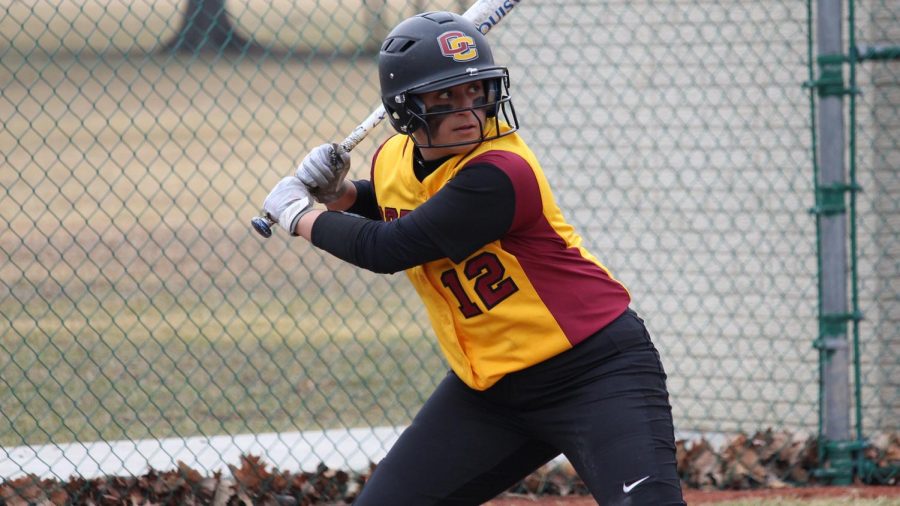 College third-year on the softball team V Dagnino has worked hard their entire life to achieve their goals, setting high standards for those around them. At age 13 they played on the Peruvian national softball team, traveling across the world playing the sport they love. A self-described hustler, they juggle their time between classes, practice, and a myriad of jobs to support themselves through college. Dagnino is inspired by their parents who work endlessly to ensure a better future for their children. In the future, Dagnino hopes to give back to the community and provide the same support to others that they received throughout their time at Oberlin.

This piece has been edited for length and clarity.

How long have you played softball? What has been your journey through the sport?

What was it like to play on a national softball team?

Playing for the national team helped me evolve as a person; it’s one of the highlights of my life. I was 13 when I joined, so I had to grow up at a young age. When I was trying out, I didn’t expect to join the team. I practiced with the team for two weeks and at the end of that, they told me that in two weeks I would be going to Brazil to play. I couldn’t fully grasp what was happening but my mom and dad were so proud. The tournament in Brazil was such an adventure because I had never traveled by myself to a foreign country. I felt like I blacked out when I played, but I know that I scored in that tournament. At one point I broke my thumb, but I kept playing, because I just had so much adrenaline.

What is your favorite memory from your time on the Oberlin softball team?

Definitely when we beat Denison University for the first time in program history. I know that my national team experience was something that I’ll never forget and something I cherish, but honestly I’ve had better moments being here at Oberlin, because of the team being so amazing and being surrounded by amazing human beings who are doing great things, both on the field and off the field.

What are you looking forward to in your last season of softball?

I want to be competitive, to go out with a bang. This is my last year I’ll play collegiate softball, and the sport has opened so many doors for me. I remember being 10 years old and my dad asking me if I wanted to play competitively. I said, “Yes,” and he told me that I would have to work hard and that it wasn’t going to be easy. He told me that he believed that I could be the first in the family to go to college through softball. Since then, it’s been all gas, no breaks. I worked hard to achieve the opportunity to go to college, and now that I’m in college, I’ve cherished every moment — it’s a dream come true. Every time I play it’s because I love the sport. I can be present and in the moment and see all the hard work it took to get me here. I never expected to be able to attend an institution like Oberlin, I thought I would be another person who went to community college or ended up in the army. I never expected to be at Oberlin, and it’s been amazing.

Outside of softball, you work for the Preventing and Responding to Sexual Misconduct program. What sparked your initial interest in the program?

I’ve always had a drive to help others and I wanted to make Oberlin a better place. Being a PRSM trainer has also given me a sense of what I want to do when I graduate from Oberlin. I actually held out on applying until the spring of my sophomore year because of imposter syndrome; I was worried that I wasn’t good enough. I finally decided to apply, and I remember going into my interview and talking about how I learned a lot about consent at Oberlin. I grew up in a household where sexual education and consent weren’t really talked about. So, coming to Oberlin, I wasn’t one of those people who knew everything straight off the bat, but I was willing to learn, and I wanted to learn as much as I could to help others. PRSM did so much for me as an organization, so I wanted to do the same for them.

You also run a haircutting business. How did you become interested in cutting hair?

It’s a side gig. I’m a first-gen, low-income student. My parents immigrated from Peru so that I could get ear surgery. They left their white-collar businesses, and my dad started cleaning windows at a car dealership and floors at Whole Foods. From there, he opened up a cleaning business, lost his job during the pandemic, and is now opening up a restaurant. He’s a hustler in the best way possible; he does whatever it takes to put food on the table, and I’m the same way. I worked at Target, I take pictures for Oberlin athletics, I’m a recruiting assistant for football, and now I also own a haircutting business. I got inspiration from my dad, who taught me how to cut hair. There are important skills that I’ve learned throughout all my jobs, and I do it because I’m working to provide for myself and get through college. I don’t have the luxury of a weekly allowance or a trust fund, but I do have the skills and lessons that I learned from my dad, which are so valuable because I have these skills for the rest of my life.

What do you hope to see in the future in terms of support for LGBTQ+ athletes at Oberlin but also in the greater athletic community?

When I was on the Peruvian national team, there were times where I had to hide parts of my identity. I would go for months in a different country where I was surrounded by girls who believed that being gay was bad. It caused me a lot of harm, particularly during these formative years. Coming to Oberlin, being involved with PRSM, having the chance to have the platform to create athletic workshops, and having a chance to really be myself and not having anybody judging me, having a team that’s loving and a coach that is so understanding, has led me to want to help people. I want to make Oberlin a better place for all athletes to feel included and safe. I want Oberlin to be a space where they can be whoever they want to be in a space where they know that everyone wants them to be successful. Everyone who is involved in PRSM wants to make Oberlin a better place. Oberlin can be an example among our conference and the greater NCAA community as a place that is welcoming of everyone. Oberlin is small; I know that fixing Oberlin athletics isn’t going to fix the world, but it’s a start.