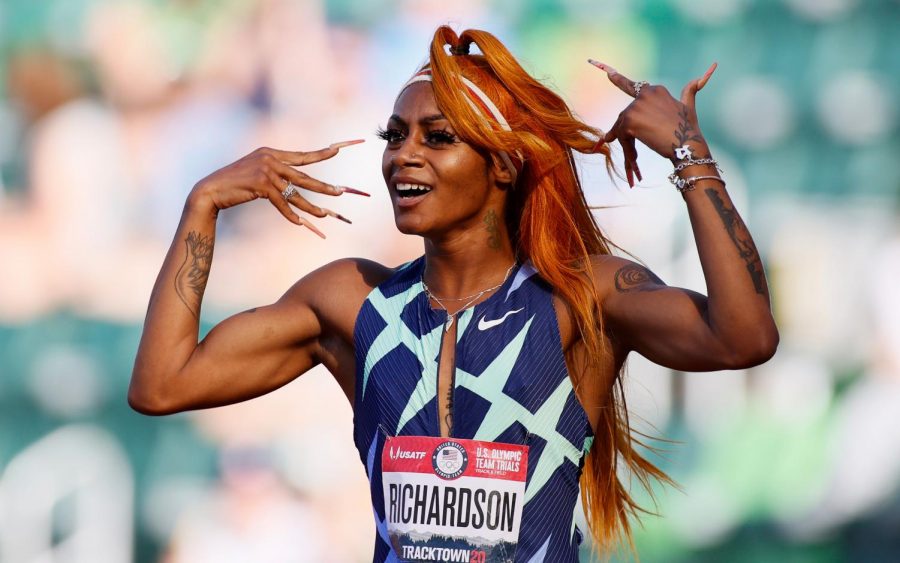 Sha’Carri Richardson winning the 100m at the US Olympic trials.

Earlier this month, track star Sha’Carri Richardson tested positive for marijuana, leading to a one-month suspension from the Tokyo Olympics. Richardson was the favorite for a gold medal in the 100-meter dash.

The 21-year-old tested positive in the state of Oregon — where marijuana is legal — in the beginning of July and accepted a suspension of one month, starting on June 28. This punishment comes only a couple weeks after she dominated the Olympic Trials with a 10.86 second victory.

According to the World Anti-Doping Agency, marijuana is on the list of prohibited substances which both the United States Anti-Doping Agency and USOPC follow. Testing positive for marijuana can result in a suspension of up to two years, or as little as one month if an athlete can prove the use of cannabis was not related to sports performance and if they complete a substance abuse treatment program.

The drug is banned only during in-competition periods, which are defined as beginning at 11:59 p.m. on the day before a competition and ending at its conclusion. Athletes may have up to 150 nanograms per milliliter of THC, the main psychoactive substance in marijuana, without causing a positive test. The USADA website states that “marijuana is a prohibited substance because it can enhance performance” and that the substance “poses a health risk to athletes and its use violates the spirit of the sport.”

Many however, believe that marijuana is not a performance-enhancing drug and, if anything, would make someone slower or decrease lung capacity and health. Sha’Carri Richardson is an incredible athlete and one of the fastest women in the country; the fact that she was able to accomplish this while also using marijuana can be seen as nothing less than impressive.

With marijuana becoming much more normalized in the U.S., people are arguing that the rule that Richardson broke should no longer exist, as it has become obsolete. Richardson’s suspension also brings to light the discrimination Black athletes are forced to face in comparison to white athletes. Yet again, we see a Black woman punished for doing something that white people do publically without consequences. While it’s understandable that there is a banned substance list, many believe that it should be reserved for substances that will enhance an athlete’s performance or give them an unfair advantage, such as steroids.

On the same day that Sha’Carri Richardson was suspended, Olympic and WNBA basketball player Sue Bird announced a partnership with a CBD brand meant to help athletes, but faced no consequences. The post has since been deleted, but it highlights the differences in treatment and perception of Black and white athletes. A Black athlete gets banned from the Olympics for using THC, which is a cannabinoid, while a white athlete gets paid to use and post about CBD, which is also a cannabinoid.

Advising athletes against marijuana use, especially during competition periods, is understandable. However, there should not be negative consequences should an athlete choose to use the substance at any point. Marijuana is used by many people in the same capacity that alcohol is, yet there is no ban against alcohol.

In her interview with NBC Today, Richardson attributed her positive test on her use of marijuana as a way to cope with the death of her biological mother. Richardson was raised by her grandmother and learned about the death of her mom from a reporter during an interview. She later called it triggering and “definitely nerve-shocking.”

She apologized to her fans, her family, and her sponsors, saying, “I greatly apologize if I let you guys down, and I did” and tweeted, “I am human” on July 1.

Sha’Carri Richardson has inspired young women all around the world as yet another Black female athlete killing it in her sport. She is unapologetically herself and finds ways to authentically express herself while engaging in track and field. While Richardson is a generational talent and will no doubt come back even stronger despite the institutional biases working against her, it’s essential that the Olympics, and the sports world as a whole, reform their archaic practices to better support athletes.