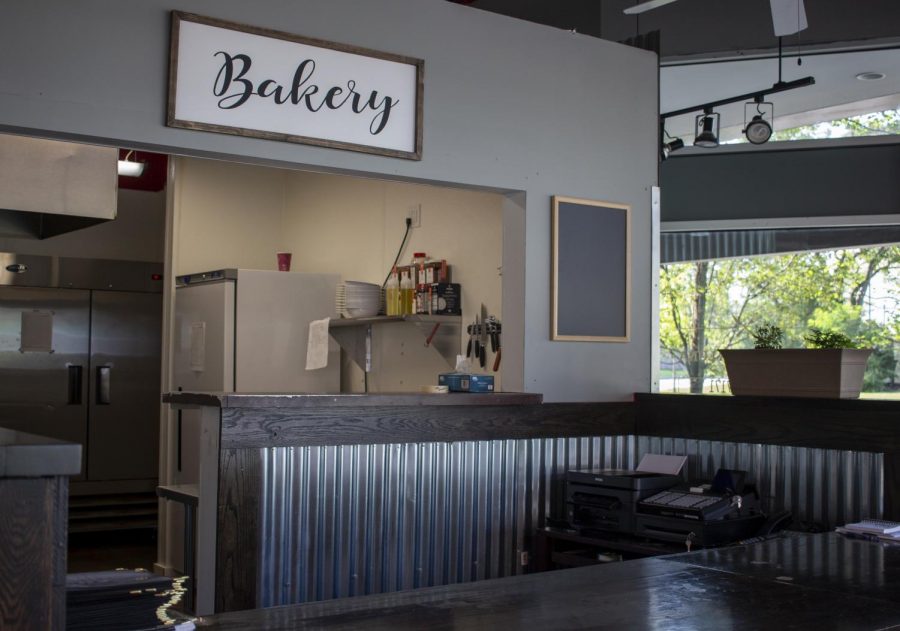 Bistro Bella Luna, a new restaurant with Italian-inspired cuisine, hosted its grand opening yesterday afternoon in the space formerly occupied by Dave’s Cosmic Subs. The restaurant will emphasize fresh and local produce, allowing the ingredients available to them to shape the menu as the seasons change.

Chef and owner Robert Ulmann has been working since April to prepare a space for the Oberlin community to gather fresh and high-quality food. He has been pulling inspiration from his experience as an executive chef at Judson Manor in Cleveland to create a restaurant that will serve French and Italian style food to largely college-aged diners.

“When I was in Cleveland, I worked at a lot of high-end restaurants,” Ulmann said. “We had entrees [that were] $40, $45 an entree. What I always wanted to do was [produce] good-quality food, but at a lower, affordable price — moderate pricing where everybody can get it. I want to do fresh seafood, pasta is made to order, fresh salads made to order, homemade dressings.”

Ulmann hopes that Bistro Bella Luna will become a new go-to Oberlin restaurant, and that city residents and College students will come together and explore new dishes that directly reflect a community-based approach to food. The bistro will feature a pastry counter situated at the front and some tables tucked in the back area for quieter conversations.

The new business has already partnered with Oberlin Food Hub, a nonprofit that helps distribute locally-grown food, to provide quality ingredients. The restaurant plans to display information about the farms that grew the ingredients in each dish.

COVID-19 disruptions caused many prominent storefronts to close downtown, which opened the door for Ulmann’s vision. Ulmann sees the Bistro offering something distinct to residents, including a new option for brunch, and he hopes to host events involving other surrounding restaurants that will introduce new patrons.

“The thing is, there’s two other places that did breakfast, … but they’re both closed,” Ulmann said. “So I think there’s plenty of room for another brunch here. … I think the menu is not as big as The Feve, but I think it’s different enough that people now have an option to either go there or here.”

Executive Director of OFH Dave Sokoll, OC ’09, has been working to provide Bistro Bella Luna with local produce from farms in the surrounding area. OFH has worked with multiple partners throughout the City and College, including businesses and organizations such as the Oberlin Student Cooperative Association, The Feve, Steel Magnolia, and AVI Foodsystems.

The partnership means that the new restaurant will source ingredients from farms within a 100-mile radius from Oberlin, if not closer, which Ulmann hopes will lead to fresher and better-tasting meals.

“We let the food lead our business,” Sokoll said. “We’re working to build relationships with people who just want what we have and are happy to get it and really understand the value that like, ‘Yeah, our cucumbers might be a couple bucks more a box, but in season they’re going to blow everything else away on flavor and appearance and quality nutrition.’”

College third-year Alayna Bierly attended the Bistro’s soft opening last weekend. She often eats at the same couple of restaurants in town, so she is looking forward to having something new.

“I was, like, excited for there to be an alternative to the Feve now,” Bierly said. “Now that the Black River [Café] and the Oberlin Kitchen are closed — especially since on weekends, it tends to be extremely difficult to get into with everyone going and super long lines and stuff. So I was excited to have another brunch spot.”

Bistro Bella Luna’s emphasis on employing a local food network, specifically working with the OFH, was particularly exciting for her, because it brings together her passion for sustainable food systems.

Ulmann hopes to see his dream become a central part of the Oberlin food scene.

“I think the menu is different from anything else in this area,” Ulmann said. “I’m using local, I’m using hydroponic greens and all that kind of stuff. And I think it’s going to be a good appeal to the residents and the students in college here, because it is different, and I’m going to use good-quality food.”